The Story Of The Decade — Is This Mass Murder By Media And Government?

“The data is overwhelming… There is no medication that has been proven to be more effective than Ivermectin for the treatment of Sars-Covid-19… can save 60,000 lives per week.” — Dr Paul Marik

It is the story of Capuzzo’s mother’s road to recovery and it says it all. She was on death’s door and the hospitals refused to treat her with Ivermectin. Capuzzo’s family, desperate to save Judy (Capuzzo’s 80-y-o mum) took the fight to the courts and won. But the hospital refused to comply with the court order. However, in her final hours, the family finally managed to get Judy treated with Ivermectin — allowing her to make a miraculous recovery.

Much of Capuzzo’s article focuses on Dr Paul Marik, Meduri, Varon, Iglesias, and Kory — (four brilliant immigrants from South Africa, Italy, Mexico, Cuba, and one brash New Yorker). Marik, the legendary professor, with a South African accent is the second most published critical care doctor in the history of medicine, with more than 500 peer-reviewed papers and books, 43,000 scholarly citations of his work, and a research “H” rating higher than many Nobel Prize winners. I’m sure Youtube has deleted most of his videos for violating their community guidelines. They deleted Dr Kory’s US Senate committee appearance.

“Marik is world-famous as the creator of the ‘Marik Cocktail,’ a revolutionary cocktail of cheap, safe, generic, FDA-approved drugs that dramatically reduces death rates from sepsis by 20 to 50 percent anywhere in the world.

“Kory, Marik, et. al published the first comprehensive COVID-19 prevention and early treatment protocol (which they would eventually call I-MASK). It is centered around the drug Ivermectin, which President Trump used at Walter Reed hospital, unreported by the press, though it may well have saved the president’s life while he was instead touting new big pharma drugs.”

I had suspected Trump might have been given Ivermectin — but for all sorts of reasons, the word Ivermectin is VERBOTTEN. Gumshoe contributors wrote to the health minister in Victoria to no avail — as the government is reluctance to accept anything but a vaccine solution. Health officials favour the experimental jab (that failed in animal trials) over a drug that had been prescribed over 4 billion times — safely.

Dr. Lee Merritt: In Animal Studies, After Being Injected With mRNA Technology, All Animals Died Upon Reinfection. 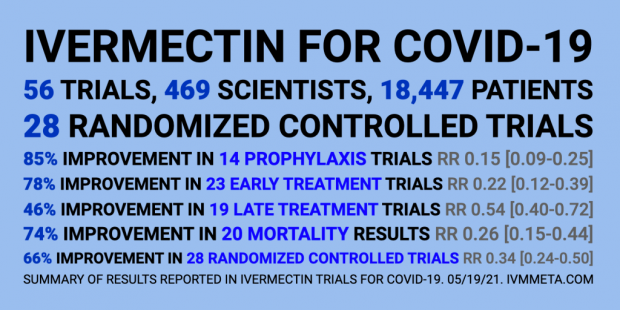 There have now been 56 trials and statistics across the world that reveal the true effectiveness of the drug. But nothing appears in the mainstream (except on Sky News).

As Nick Corbishley, from Nakedcapitalism, quotes Capuuzzo as saying,

From here, I quote extracts from the article in Zerohedge (by Tyler Durden):

“The 15-page [Capuzzo’s] article chronicles the gargantuan struggle being waged by frontline doctors on all continents to get ivermectin approved as a Covid-19 treatment, as well as the tireless efforts by reporters, media outlets and social media companies to thwart them.

Because of Ivermectin, Capuzzo says, there are “hundreds of thousands, actually millions, of people around the world, from Uttar Pradesh in India to Peru to Brazil, who are living and not dying.” Yet media outlets have done all they can to “debunk” the notion that Ivermectin may serve as an effective, easily accessible and affordable treatment for Covid-19. They have parroted the arguments laid out by health regulators around the world that there just isn’t enough evidence to justify its use.

For his part, Capuzzo, as a reporter, “saw with [his] own eyes the other side [of the story]” that has gone unreported, of the many patients in the US whose lives have been saved by ivermectin and of five of the doctors that have led the battle to save lives around the world, Paul Marik, Umberto Meduri, José Iglesias, Pierre Kory and Joe Varon. These are all highly decorated doctors. Through their leadership of the Front Line COVID-19 Critical Care (FLCCC) Alliance, they have already enhanced our treatment of Covid-19 by discovering and promoting the use of Corticoid steroids against the virus. But their calls for ivermectin to also be used have met with a wall of resistance from healthcare regulators and a wall of silence from media outlets.

But unfortunately, most reporters are not interested in telling the other side of the story. Even if they were, their publishers would probably refuse to publish it.

That may explain why Capuzzo, a six-time Pulitzer-nominated journalist best known for his New York Times-bestselling nonfiction books Close to Shore and Murder Room, ended up publishing his article on ivermectin in Mountain Home, a monthly local magazine for the of the Pennsylvania mountains and New York Finger Lakes region, of which Capuzzo’s wife is the editor.

Children of the Same Foul Spirit? Is the United States in Its Death Throes?