The Death of Truth & the Rise of Centralized Government Control

As I write this from a France making ever more bold moves toward forced vaccination, one can’t help but ponder the broader issues of centralized government control, regardless of one’s take on vaccine or no vaccine.

Focusing on financial rather than viral data, the evidence of centralized state control over natural market forces in the stock and bond markets is becoming increasingly incontrovertible.

We’ve written elsewhere about the death of logic and the madness of crowds. It should therefore come as little surprise that the death of truth is yet another casualty of the increased central control we are experiencing in global markets.

Long before COVID reared its highly controversial head (from viral source debates, baby-with-bathwater policy reactions, censored science as to vaccine efficacy and safety, distorted math on infection rates vs death rates, and centralized government control by officials acting “for your own safety” vs. Constitutional and legal issues of individual choice), the global financial system was already in an undeniable as well as unsustainable debt crisis.

As any one who can fog a mirror and read history in the same breath also knows, whenever a debt crisis is obvious, what follows is equally obvious: an economic crisis, then a political crisis, and from there a social crisis.

Debt is a very dangerous thing to economies and societies, and always climaxes with more centralized control in its wake.

The problem for the 21st century, however, is that almost no global policymaker (left, right or center, European, Asian or American) wanted to touch this $280T debt elephant in the room.

Instead, they buried their heads for years in the sand and sought re-election with promises paid for with, alas, more debt.

In this openly embarrassing backdrop (long before COVID), economic orthodoxy had been tossed into a corner as governments around the world took on fatal debt levels like this: 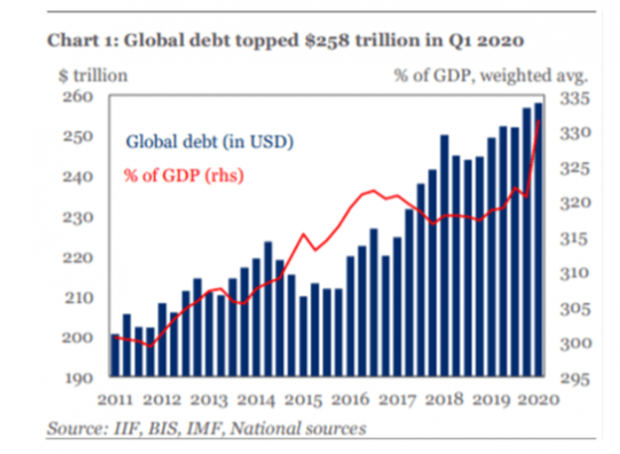 …paid for (i.e., “monetized”) with mouse-click fiat money like this… 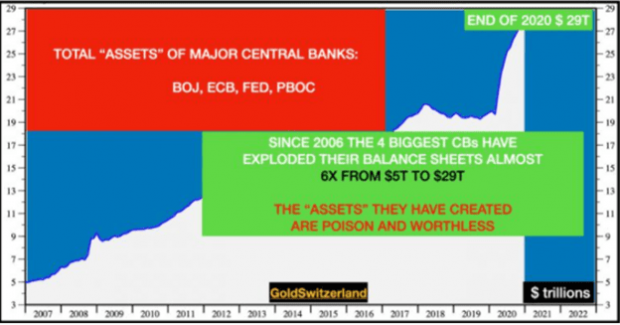 But rather than face or confess the sins of a system already on its debt-broken knees, the financial and political actors responsible for the pre-COVID debt disaster had a convenient tale to tell.

That is, and almost as if on demand, along came the tale of all tales, the patsy of all patsies, the blame of all blames, and the excuse of all excuses: COVID. 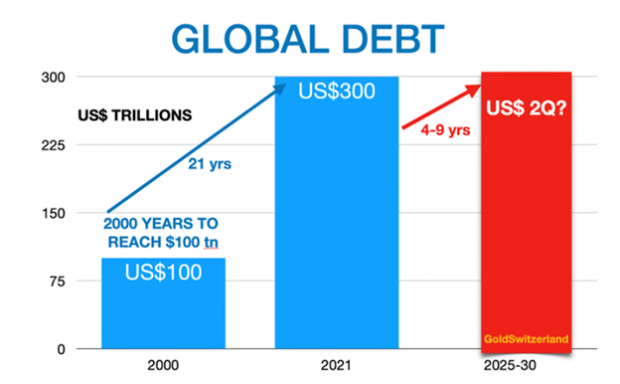 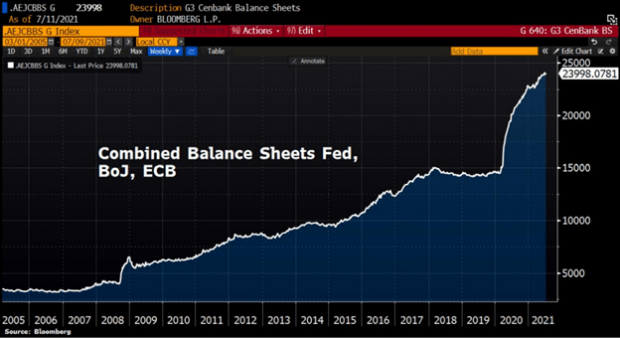 COVID paved a sad new road to what Antoine van Agtmael described as “fuzzy economics”—namely a financial panopticon in which governments worldwide have literally gorged themselves on ever more debt in a secular paradigm shift toward greater centralized control over our economic, personal, social, political and foreign policies.

From vaccines to banking regulations, lockdowns to melt-ups, individuals and markets are now adapting to a new set of desperate rules in the wake of the equally desperate failures of prior financial policies.