By Charles Rotter
Watts Up With That? 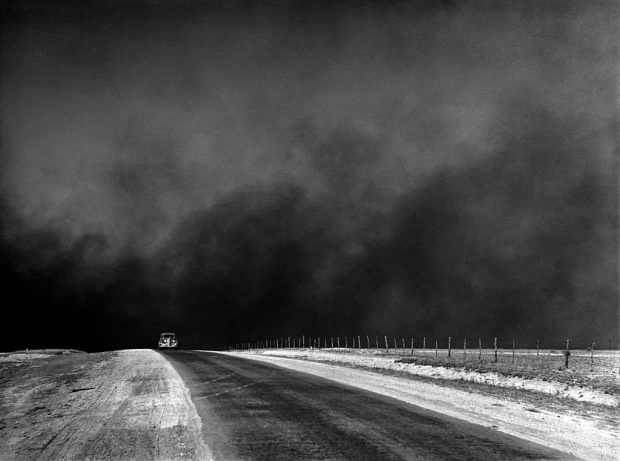 Photograph of a dust storm captured in the Texas Panhandle during March 1936. When the drought and dust storms showed no signs of letting up, many people abandoned their land. The Dust Bowl exodus was the largest migration in American history. By 1940, 2.5 million people had moved out of the Plains states of which 200,000 moved to California. Credit: Arthur Rothstein, Public domain, via Wikimedia Commons

Overview
One of the most widespread and destructive heat waves ever recorded in the US took place in the summer of 1936 which fell right in the middle of arguably the hottest and driest decade ever for the nation. The decade of the 1930’s is renowned for the “Great Depression” and the “Dust Bowl”, both of which caused calamitous human suffering in this country. Not only were huge numbers of crops destroyed by the heat and lack of moisture in the “Dust Bowl” era, but thousands of lives were lost as a result of the heat, drought and economic hardship. This extreme heat wave was particularly deadly in high population areas where air conditioning was still in the early stages of development. The heat wave experienced in 1936 began in late June, reached a peak in July, and didn’t really come to an end until September. Many of the all-time high temperature records that were set in the 1930’s in numerous cities and states still stand today. Perhaps the hottest day ever recorded in the US took place on July 14th in 1936 when the average maximum temperature was 96°F and 70% of the US was over 90 degrees. 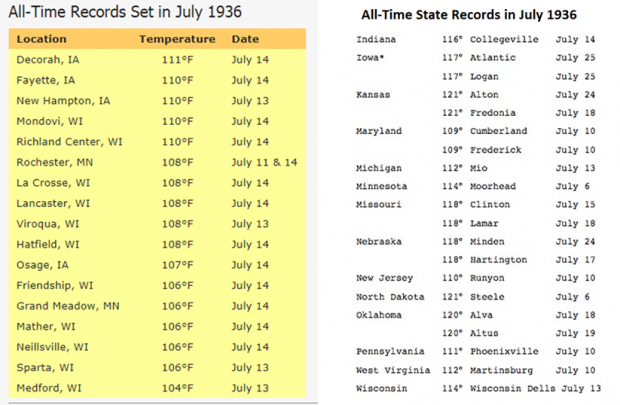 Note – the all-time high temperature record of 111°F in Pennsylvania was actually set on both July 9th and July 10th in Phoenixville (Chester County) during this heat wave. 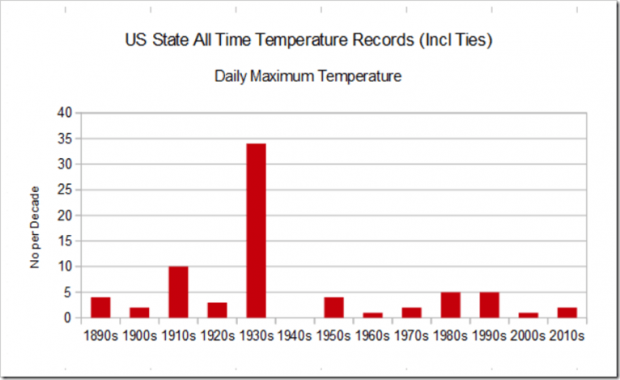 Distribution of state all-time high temperature records on a decade-by-decade basis with the highest number in the 1930’s. Source: NOAA/NCDC

Discussion
The “Dust Bowl” years of 1930-1936 brought some of the hottest summers ever to the US; especially, across the Plains, Upper Midwest and Great Lakes in arguably the hottest decade on record for the US (source 1, source 2). In addition, there were a series of droughts in this time period which ruined crops all across the Plains where, for example, lush wheat fields became unproductive waste lands.  The suffering in the “Dust Bowl” era was brought to life at the end of the decade in the book written by John Steinbeck called The Grapes of Wrath which follows the migration of a poor family of farmers from drought-stricken “Dust Bowl” farmlands to the state of California.  The relentless drought across the central Plains during these “Dust Bowl” years contributed in a “positive feedback” fashion to the excessive heat by allowing the sun’s energy to be used almost exclusively in the heating of the ground and lower atmosphere without much energy loss at all in the evaporation of soil moisture.

The worst of the extreme heat in the summer of 1936 took place during the middle part of July.  In the week that ended on July 18th, thousands of lives were lost due to the extreme heat and relentless drought conditions across the nation.  High temperatures of 100+ degrees (F) were widespread in this time period and numerous cities and states set their all-time high temperature records which still stand today (including in the Mid-Atlantic states of Pennsylvania, New Jersey and Maryland).