At Least 138 Volcanoes Buried Beneath The Antarctic Ice Sheet

“Scientists discover 91 volcanoes below Antarctic ice sheet,” read the headline in The Guardian on 12 Aug 2017. 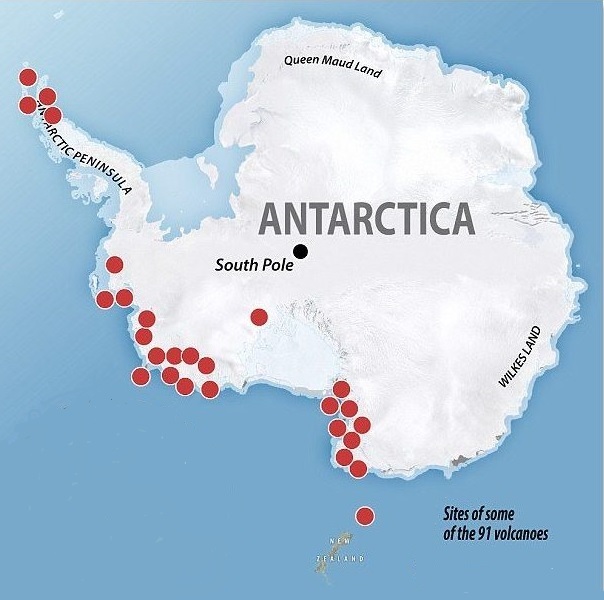 This is in addition to the 47 subglacial volcanoes already known about in Antarctica, wrote Robin McKie.

This makes it the largest volcanic region on Earth, and it’s hidden 1.2 miles (2 km) below the surface of the vast ice sheet that covers west Antarctica.

A project by Edinburgh University researchers revealed the 91 volcanoes – with the highest as tall as the Eiger, which stands at almost 4,000 meters (13,123 ft) in Switzerland.

Put another way, the highest of these newly discovered volcanoes stands more than two miles tall!

The tips of some of the volcanoes actually lie above the ice and have been spotted by polar explorers over the past century.

Geologists say this huge region is likely to dwarf that of east Africa’s volcanic ridge, currently rated as having the densest concentration of volcanoes in the world.

And the activity of this range could have worrying consequences, they warn. “If one of these volcanoes were to erupt it could further destabilise west Antarctica’s ice sheets,” said glacier expert Robert Bingham, one of the paper’s authors. “Anything that causes the melting of ice – which an eruption certainly would – is likely to speed up the flow of ice into the sea.