Why have I, a cradle Catholic, learned more about the Prince of Peace, the evils of war, and the lies of the government from the LRC website than from my own Church?

In 2007, LRC published “A Military Chaplain Repents,” an interview that Fr. Emmanuel McCarthy did with Fr. George Zabelka in the late 1970s. Fr. Zabelka served as the Catholic chaplain for the group that dropped atomic bombs on Hiroshima and Nagasaki. No Catholic magazine or newspaper was interested in publishing this interview at the time. It wouldn’t have seen the light of day if Sojourners, a Protestant publication, had not published it in 1980.

In 2005, LRC published “Blessing the Bombs,” a speech Fr. Zabelka gave at a Pax Christi conference in August 1985. By this point, George’s story had become internationally known, but even after a Hollywood-quality documentary was made about him in 1988 (“The Reluctant Prophet”), no American t.v. station, either Catholic or secular, was interested in televising it.

Whereas Maj. Gen. Charles W. Sweeney, a Catholic who flew the B-29 that dropped the atomic bomb on Nagasaki, never doubted that he did the right thing (it should be noted as a 25-year-old), Fr. Zabelka did a complete “about-face” as he called it. He said: “I was there, and I was wrong.” Which one of these men do you think was the subject of many interviews and feature articles that appeared in national publications on various anniversaries of the bombing?

This week I had the honor of interviewing Fr. McCarthy on my podcast about his good friend, George Zabelka. LRC readers might be interested in hearing the “inside story” of Fr. Zabelka’s conversion, and how Fr. McCarthy ended up meeting him, about the rocky start to their relationship, and some of the fruits that came from Fr. Zabelka’s work for peace toward the end of his life.

I see many Catholics this week reassuring themselves and others on Twitter that “the Church has always condemned the indiscriminate killing of innocent civilians,” as if to say: “It’s all good. We have nothing to repent for. We were in the right.” 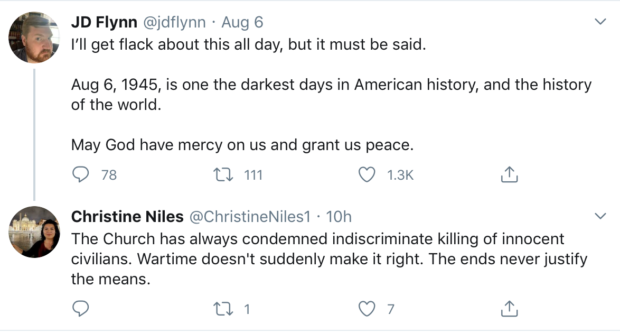 A more honest look at history might lead one to wonder, if this is true, why so many Christians participated in the indiscriminate slaughtering of civilians — and without a second thought. One cannot overestimate the importance of George Zabelka’s testimony;  but equally important I think is the story of how his testimony was, one can only conclude after listening to the podcast, deliberately suppressed, minimized, and ignored by not only the mainstream media but the mainstream Catholic Church. 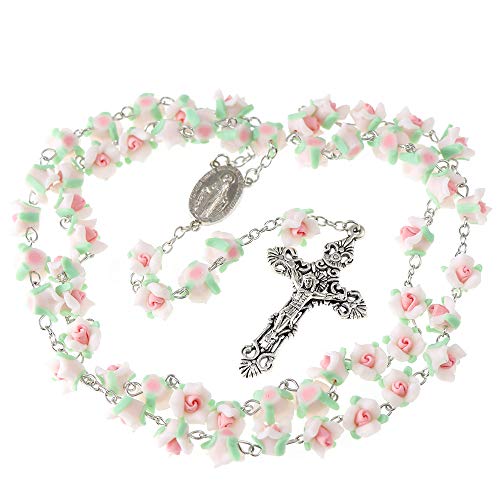 If Zabelka eventually came around to the “right side” of history and Church teaching, then why is he not considered some kind of hero? Why do hardly any Catholics know about him? Why I am, literally, the only Christian in the world using the hashtag “#GeorgeZabelka” on Twitter on the 75th anniversary of the dropping of the atomic bombs?

Fr. McCarthy always says that Jesus uses the verb “do” more than any other verb in the New Testament. Thank you for all you’ve done to spread the word of Fr. George Zabelka’s witness, for not letting his story be memory-holed. If I could, I’d give you one of the buttons that Fr. Zabelka use to pass out to people by the thousands before he died. 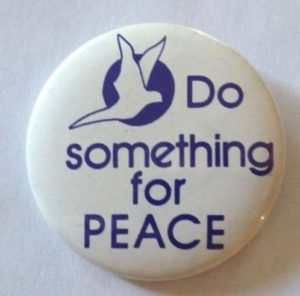 Let’s all do something for peace today. Spread the word: #GeorgeZabelka #NeverAgain