It's a Man's World

The Truth and its Consequences

“You go into Afghanistan, you got guys who slap women around for five years, because they didn’t wear a veil,” Mattis said. “You know guys like that ain’t got no manhood left anyway. So it’s a hell of a lot of fun to shoot ’em.”

The first rule of human thought is that everything is somebody else’s fault. American whites note that violent crime is mostly committed by blacks or Hispanics, who see all their problems as due to whites. Terrorism is the domain of Muslems. Democrats blame everything on Republicans and vice versa.

Most of the world points out that America causes most of avoidable destruction and suffering on the planet. The Americans believe themselves virtuous, indispensable, exceptional, and entirely dedicated to promulgating democracy. No group is itself guilty of anything.

Nobody (except feminists) says the obvious, that all of these evils are committed by….

It is always men–some other men, of course, men of another race or country, or religion or tribe or social class. We ourselves–men–are pure. But however you cut it, it is men.

The crucial problem for humanity is, probably always has been, how to control men, how to to harness their vigor and inventiveness for the common good while restraining their penchant for destruction, mass homicide, individual mlurder, rape, pillage, depravity, and foolishness.

Wars are the vilest masculine behavior. They never end. Wars are not about anything. They are just wars. Men always find something for them to be about, but really they are just what men–men–do.

The martial urge is deep in the steroid chemistry. Little boys want to play with guns. If you force dolls upon them, they shoot each other with dolls. When grown up, to the extent they ever are, they fight wars. If there is no reason for war, as for example now, they invent reasons. The Russians are coming. The Chinese are coming. North Korea will nuke us. So will Iran. We must gird our loins and fight, fight, fight.

It is the behavior of a pack of dogs. For example, when an obsolete lumbering propeller-driven Soviet-era bomber approaches American air space, fighter pilots sprint for their planes and roar into the air–loud martial noises are important to men–to intercept the intruder, bow wow, arf, woof. They cannot in sanity think that the dread Russkis have sent a single slow plane to destroy America, but that, presumably due to nucleotide arrangement, is how they behave.

It is innate and starts early. When I was a little boy of twelve, my buddies Dukesy and Mincemeat and I often set out in our perfectly safe suburb to invade the equally perfectly safe nearby suburbs in search of action. We got into rock fights with other little boys who equally had no reason to get into rock fights. We were experiencing the germ of the hunting pack or war party. Girls did not do this.

If we had lived in the downtown of a city where the frail bonds of civilization are weaker, the next step would have been membership in urban gangs. These have both the behavior of the dog pack and the trappings of armies: insignia (baseball hats worn sideways or jackets of particular colors), territory (Rolling Eighties Crips), imposing titles (War Counselor), and brutal initiations (getting jumped in). There is, as with kids of twelve, the sense of belonging, the visceral appeal of concerted action, the adrenal pull of combat. Thus do we overcome the greyness of existence.

In 1916 in the battle of the Somme, England lost 20,000 dead–men–when their generals, men, ordered them to run across open ground covered by the fire of artillery and machine guns manned–note word–by German men. Can you imagine women being so goddam stupid? The war was caused, organized, and waged by, of course, men.

The world’s history consists chiefly of men killing each other and everybody else within reach. Cannae. Zama. Thermopylae, The Bulge. Bosworth Field. The Nile, Trafalgar. Yorktown. Antietam. Custer’s Last Stand. Borodin. Austerlitz. The Varian Disaster. Midway. You could fill encyclopedias with battles, none of them making sense.

The literature of most peoples, chiefly written by men, glorifies war. The Iliad, the Anabasis, the Aeneid, Bhagavad Gita, the Old Testament, El Cid, the Gilgamesh Epic, Orlando Furioso. When men are not doing war, they write about war, talk about it, do high-fives in the O Club. In old age they fondly remember their wars as the most pungent and intense times they ever knew.

Men engaging in such behavior speak of honor. There is no honor in war, only hormonally mediated lunacy. Where is the honor in bombing cities, putting them to the sword, raping and looting? The perpetrators-men–care nothing for the horrors they infliict–Dresden, the Rape of Nanjing, Nagasaki, Nine-Eleven, the “pacification” of the Philippines after the American conquest.

Men. Can anyone deny this?

These days, when a thin patina of moralism lightly coats the public mind, soldiers–men–pride themselves on protecting their homelands, the national security, our precious values lauded but seldom practiced, and so forth. Why do countries need protecting? Because otherwise the men of other countries will attack. Our men must protect us against their men. Teddy Roosevelt said, “Speak softly and carry a big stick.” but men who carry big sticks cannot speak softly. They always want to use the stick.

The barbaric behavior of men is not restricted to soldiers. Watch documentaries about serial killers on YouTube. You will note that all are men. Men will kill thirteen women after torturing them at length, perhaps copulating with the corpse, will kidnap and rape a chilod of seven for three days before throwing her off a bridge (an actual case). Women do not do this. There is an occasional nurse poisoner and women sometimes kill their husbands, but we do not have Jane Wayne Gacys, Theodora Bundys, or Jessica Dahmers. Sexual torture-murders are, as we say, a male thing.

In cities like Chicago and Baltimore–there are many cities like these–barely organized black men–men–kill each other in hundreds. Black women do not. In Mexico, well organized criminal gangs kill each other in tens of thousand. Mexican women do not. In America, men kill with truly national enthusiasm , constantly attacking other countries and killing, killing, killing. A few women are involved as political baubles, but it is a man’s game. Which is how they regard it. As a game, an adventure.

In the past, men were not disingenuous about their moves. Conquering was expected of kings and emperors. They did it for its own sake. Alexander didn’t really need Afghanistan. Today men have to speak of spreading democracy and human rights and overthrowing evil dictators. Like wind-up victrolas they speak of duty, honor, country. They insist that war crimes are isolated incidents. In fact a war crime is business as usual that a reporter has heard about.

Short of genetic engineering, how can this grotesque misbehavior be controlled? The question is made difficult because men would have to do the controlling. They will not. They won’t give up their aircraft carriers and tanks and hero treehouses like the Green Berets.

At the level of countries, only the complete domination and disarming of the planet by one power can stop the murder. It takes two to fight and if you have only one, peace will arise, astounded. Here China is the best hope. No other country has the population and economic potential.

The other possibility is America, but it declines in both power and leadership. Which makes the times very dangerous as men, once they control the sandbox, do not readily give it up. Think Pompeo, Trump, Pence, Dsper, Bolton, Bannon, etc.

As long as men have militaries, they will use them. Wars are what men do. 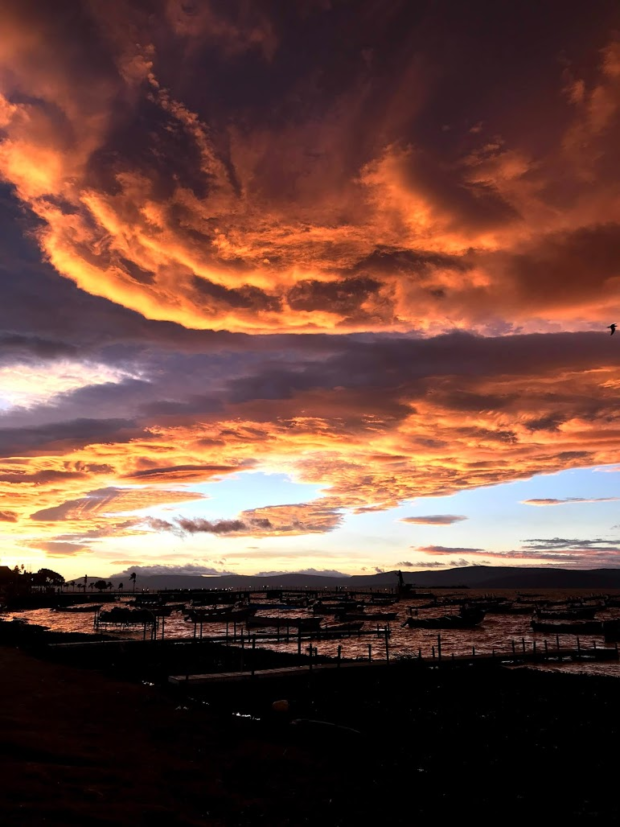 In these the End Times the gates of Hell have opened and a fiery cloud belches from the Pit to punish us for our sins. See above. Alternatively, sunrise over Lake Chapala. Photo: Violeta

Hardboiled is back! Gritty crime fiction by longtime police reporter for the Washington Times. who knows the police from nine years of riding with them. Guaranteed free of white wine and cheese, sensitivity, or social justice. Not recommended for Democrats, has been linked to apoplexy in feminists. What the critics are saying: Psychology Today: “Fred deserves his own entry in the DSM-V.” Ms. Magazine “Aaaaaaagh!”

Previous article by Fred Reed: A Most Sordid Profession

The Elite’s COVID-19 Coup Against a Terrified Humanity: Resisting Powerfully Passport to a Brave New World: the Vaccine