Top 10 Warmongering Ideas of the Day

Here’s a bonus 11th. “We have to get them over there so they don’t get us here.”

That goes back at least to the wonderful domino theory and false flag incident that kicked off the Vietnam War.

Iran has every reason to mistrust if not hate the US for its role in the 1953 Iranian Coup D’état.

The coup the overthrow of the democratically elected Prime Minister Mohammad Mosaddegh in favour of strengthening the monarchical rule of Mohammad Reza Pahlavi on 19 August 1953, orchestrated by the United States (under the name TPAJAX Project or “Operation Ajax”) and the United Kingdom (under the name “Operation Boot”). It was the first covert action of the United States to overthrow a foreign government during peacetime.

In August 2013, sixty years afterward, the U.S. government formally acknowledged the U.S. role in the coup by releasing a bulk of previously classified government documents that show it was in charge of both the planning and the execution of the coup, including the bribing of Iranian politicians, security and army high-ranking officials, as well as pro-coup propaganda. The CIA is quoted acknowledging the coup was carried out “under CIA direction” and “as an act of U.S. foreign policy, conceived and approved at the highest levels of government”.

This is what led to the Iranian revolt years later under President Carter.

In 1988, during the waning days of Iraq’s war with Iran, the United States learned through satellite imagery that Iran was about to gain a major strategic advantage by exploiting a hole in Iraqi defenses. U.S. intelligence officials conveyed the location of the Iranian troops to Iraq, fully aware that Hussein’s military would attack with chemical weapons, including sarin, a lethal nerve agent.

The intelligence included imagery and maps about Iranian troop movements, as well as the locations of Iranian logistics facilities and details about Iranian air defenses. The Iraqis used mustard gas and sarin prior to four major offensives in early 1988 that relied on U.S. satellite imagery, maps, and other intelligence. These attacks helped to tilt the war in Iraq’s favor and bring Iran to the negotiating table, and they ensured that the Reagan administration’s long-standing policy of securing an Iraqi victory would succeed. But they were also the last in a series of chemical strikes stretching back several years that the Reagan administration knew about and didn’t disclose.

U.S. officials have long denied acquiescing to Iraqi chemical attacks, insisting that Hussein’s government never announced he was going to use the weapons. But retired Air Force Col. Rick Francona, who was a military attaché in Baghdad during the 1988 strikes, paints a different picture.

“The Iraqis never told us that they intended to use nerve gas. They didn’t have to. We already knew,” he told Foreign Policy.

And where did Iraq get the chemical weapons? Some allege the US.

At a minimum, the US looked the other way.

Donald Rumsfeld was then special envoy of President Ronald Reagan.

On May 8, 2018, Trump unilaterally withdrawal from a nuclear accord with Iran that China, France, Germany, Russia, the United Kingdom, the United States and Germany signed.

Every country but the US said Iran was following the accord.

The UK, Germany and France, which all opposed the sanctions, set up an alternative payment mechanism aimed at helping international companies trade with Iran without facing US penalties.

Unfortunately, the payment mechanism has been a big failure. Iran has been unable to sell more than minimal amounts of oil.

US Steals Iran’s Assets and Returns Them

Ben Shapiro made the claim today the the money for Iran’s attack on the US in Iraq came from the US.

This lie stems from the fact that under the accord, Iran gained access to more than $100 billion in assets frozen overseas.

We impound Iranian assets, return them, and the likes of Ben Shapiro act as if we “gave” Iran money.

US, By Far, the Global Leader in State Terrorism

If you don’t support war, you get accused of being an Incomprehensible America Hating Sissy. 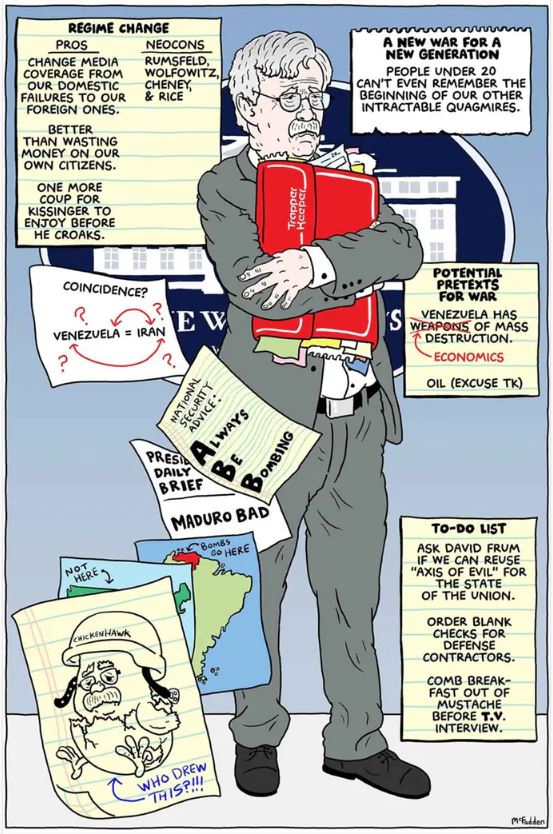 Image from John Bolton’s Warmongering Notes by Brian McFadden on The Nib.

Not Black and White

Yes, the US has done a lot of good.

And as I have pointed out many times, the US has the largest, most open capital markets in the world. Google, Apple, and Microsoft could not exist in the EU because the EU would bust them up in the name of competition.

Google thrives because it allows people free use of its search engine. People use it because they like it. Those who don’t like it are free to try something else. From its enormous search engine profits, Google started the entire new field of autonomous driving.

Earlier today someone asked me why I am in the US, as if my opinion on warmongering mattered.

To answer, because this is where I want to be.

But that does not mean one can never criticize the US or US leaders.

One should never accept the principle that might makes right, or that US leaders can do no wrong (or right). For discussion, please see the Number One Person Afflicted with TDS is Trump.

The fact is, Trump’s actions are far removed from what the constitution would allow. We have gone from one undeclared war to another to another.

The second fact is the US has wasted trillions of dollars on not only stupid, but counterproductive wars.

The asinine decision to invade Iraq and take out Saddam Hussein, our once ally on the “enemy of my enemy is my friend” thesis led to the creation of ISIS.

When you look at 7 decades of US policy and belligerency towards Iran, they would be nuts to not want a nuclear bomb. Their top reason would be to defend themselves from the US.

Few in the US can put themselves in someone else’s shoes. If you lived in Iraq, Iran, Pakistan, or Afghanistan and a US drone killed your kid, you would have every reason to want to strike back, wouldn’t you?

Instead, the mindless US public, brainwashed by neocon and the warmongering media, couldn’t care less about collateral damage. Note that the Left Wing “Liberal Media” Cheers War and Assassinations

What do we have to show for two decades of endless wars?

We have wasted several trillion dollars for what?

Could we not make better use of that money on US infrastructure than blowing up the world and making enemies in the process?

Nah. That kind of thinking is for sissies. Real men are willing to kill innocent men women and childrens with drones and blow up cultural sites in the name of peace.

Previous article by Michael Shedlock: Elizabeth Warren Has a Bad Plan for Everything

Tired of the Media’s Pentagon Spin?Pompeo’s Gulf Of Tonkin Incident