The False Prop Of “Get Your Flu Shot”: “Influenza-Like Illness”

Walk in to any chain pharmacy or a Big Box store, and they are promoting flu shots as you enter the front door.  Flu shots are big business now.  The masses must be vaccinated.

Relias Media, self-proclaimed as a “trusted source for healthcare information,” releases this headline story: “Given the nation’s antivaccine movement and the annual safety myths and efficacy quibbles about the seasonal influenza vaccine, public health officials are keeping it simple this year: CDC: Flu Vaccination Can Keep You Out Of The Hospital, Morgue.”  In my lifetime, I have never known of a single person who died of influenza.  Yet the annual mortal threat posed by the flu seems like an imagined pandemic every flu season.

NBC-News posts a report entitled “Here’s why doctors urge people to get the flu shot every year” with an accompanying video story of a 4-year-old who became ill with flu and developed swelling of the brain and lost some of her vision, which may or may not be permanent, the report says.  But the headline reads: “Mother’s warning after flu leaves 4-year old blind.”  Video footage shows a child who certainly has some functional vision.  The news report appears to be a scare tactic.  A major news agency is doing the bidding of the vaccine makers.

Another online political news portal, The Hill, ran with the NBC story with a headline that reads: “4-Year Old Who Wasn’t Vaccinated Against Flu Goes Blind From Virus.”  And so it goes in our dystopian “fake” news era.  Fiction becomes non-fiction.

Meanwhile, other news agencies report flu vaccination is likely to be ineffective against a new flu strain.  The overall blended message is “get a useless flu shot.”

The essence of flu fakery

But here is the essence of the annual flu fakery.  It’s called “influenza-like illness.”

At the end of December/2019 The Center for Infectious Disease Research & Policy (CIDRAP) reported 4.6 million flu illnesses, 39,000 hospitalizations and 2100 flu-related deaths in this flu season with outpatient visits for influenza-like illnesses spiking from 3.9% to 5.1% for the week ending Dec. 21.

And therein lies the lie – – – influenza-like illnesses (ILI).  ILI is defined as fever (temperature of 100°F [37.8°C] or greater) and a cough and/or a sore throat without a known cause other than influenza.

The Centers For Disease Control (CDC) is said to collect and disseminate data from the “The U.S. Outpatient Influenza-Like Illness surveillance Network,” a collaboration of CDC, state and local health departments.  What is this influenza-like illness?  Where does it come from?  Are medicines prescribed to treat the flu the same drugs to treat influenza-like illness? 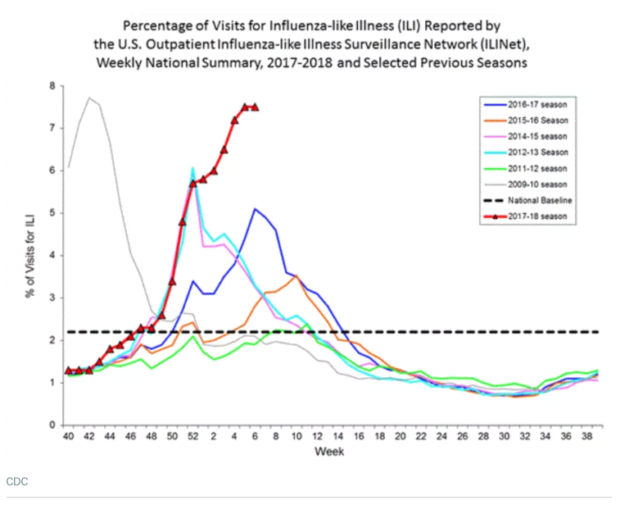 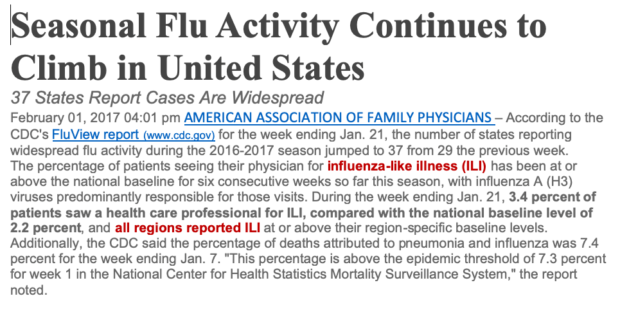 Other infectious diseases mimic the flu

MedScape reports 20-40% of influenza-like illness is caused by other respiratory tract viruses, particularly adenovirus or respiratory syncytial virus.  The latter often causes a less intense fever and bronchitis, a symptom that is difficult to distinguish from the flu.  Flu vaccines protect against strains of influenza virus, not other viruses.  That means, if you opt for vaccination based upon symptoms, 20-40% of the time you have nothing to gain.  The following chart provides a list of bacterial, viral and fungal infections that cause flu-like symptoms. 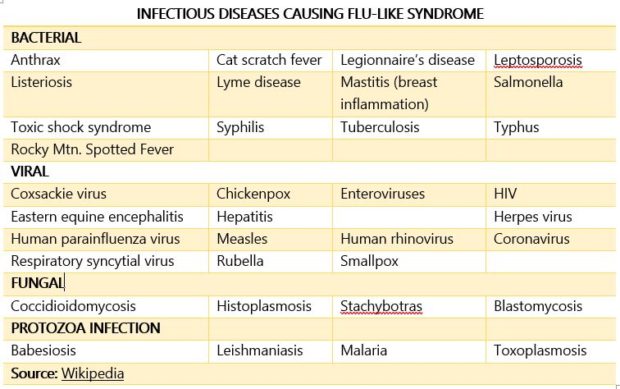 Symptoms of the flu, influenza-like infections and side effects of anti-inflammatory/TNF-inhibitor drugs are much the same, making it difficult to discern one from the other. 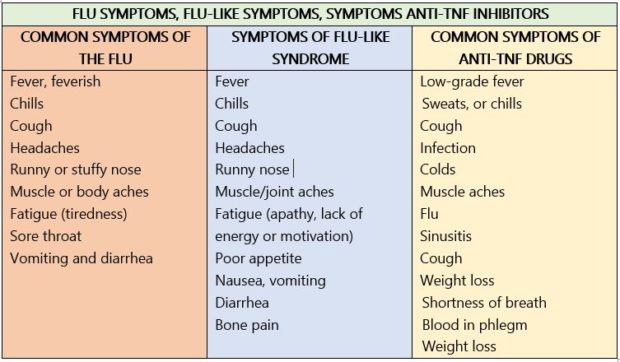 TNF-blocking drugs and the flu

There are a lot more reasons why unwary patients may end up with flu-like symptoms.  One of the most prominent is TNF-inhibiting drugs used to treat pain and suffering from autoimmune diseases like rheumatoid arthritis, psoriasis, ulcerative colitis, Crohn’s disease, eye inflammation (uveitis), multiple sclerosis.  Rheumatoid arthritis patients are at increased risk of infection even in the absence of immunosuppressive TNF-inhibiting drugs.

Given that TNF blockers produce symptoms that are similar to the flu, it is obvious that users of these immune-compromising drugs may be included in annual flu data and may comprise a sub-population at greater risk for hospitalization and death.

However, TNF inhibitors can work too strongly and over-inhibit immunity.  TNF drugs are known to actually increase risk for infectious disease including seasonal influenza (see chart below). Current expert opinion is that patients on any immune-suppression drugs are at increased risk for influenza.

Therefore, doctors recommend patients with autoimmune disease update all their vaccinations prior to initiation of anti-TNF drugs.  But the flu vaccine must be administered annually.  And TNF-inhibitor drug users need to get booster shots of the flu vaccine because the first round of the flu shot may not produce sufficient antibodies.  TNF-drug users may be on a tightrope.

Infectious disease experts note that 71 healthy adults need to be vaccine to prevent 1 case of influenza. That represents a 1.4% reduced risk for the flu.  Therefore, the chance that you will avoid the flu by getting vaccinated is nil (see chart below).

In a report published in Arthritis Research & Therapy experts say: “Infections are most probably even more dangerous for patients under TNF blockade. The answer, therefore, is certainly not to leave vaccinations out, but to vaccinate more often, more consistently, and everybody with a rheumatic disease.”  But this increases risk for side effects including flu infection itself.

These numbers are only applicable when one anti-TNF drug is used.  About a third of patients on anti-TNF drugs respond poorly and are candidates for a 2nd drug.  Approximately half of the normal antibody levels are maintained one month after dual anti-TNF-blocking drugs are employed.  Over-inhibition of TNF may place patients at risk for infection (namely tuberculosis and the flu).  The recommendation is that patients with autoimmune disorders get vaccinated prior to initial anti-TNF treatment.

The Immunization Action Coalition recommends patients with auto-immune diseases or who take immune inhibiting drugs be given inactivated vaccines and “should not be given ‘live’ vaccines.”  Of note, nasally-instilled FluMist has been re-introduced for use in 2018.  Senior adults comprise ~60% of patients hospitalized for the flu and 85% of flu deaths.  This is especially important because vaccination against pneumonia does not result in reduce risk of death or hospitalization.

Serious side effects and hospitalization from vaccination may result while the immune response is actually reduced due to use of anti-TNF drugs.  This is highly possible because unwary patients may get vaccinated for the flu at local drug stores, bypassing medical risk assessment.

It may not be fully recognized that TNF itself helps to prevent infection and death, but in high doses over-inhibit the immune response to the point of death, which has been shown in the animal lab.

The following chart helps to understand the reduced risk for the flu produced by flu vaccination.  The flu shot reduces risk in the healthy population from 2 to 1 in 100. Among individuals who take anti-TNF drugs, 14 will develop influenza and if they are pre-vaccinated prior to starting anti-TNF drugs the risk is reduced from 14 to 4. 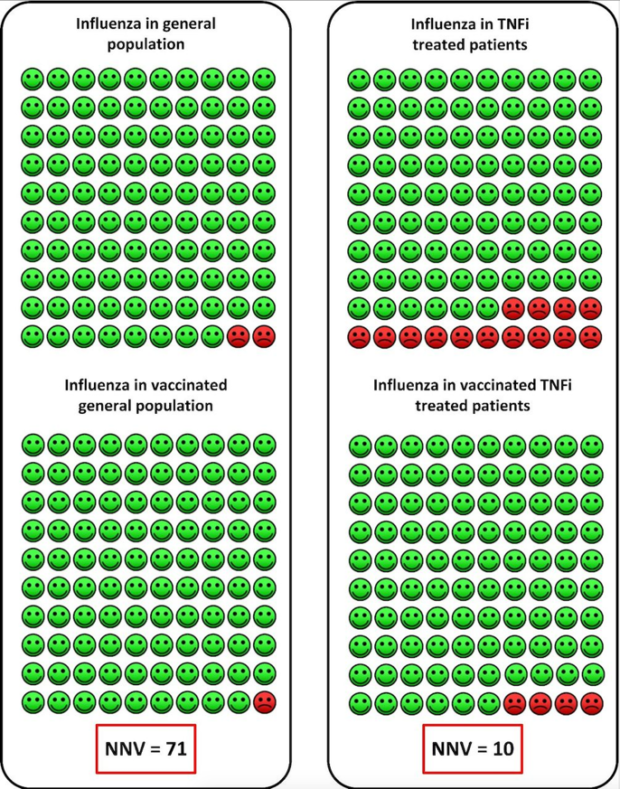 Mega-doses of these natural TNF-inhibitors, which are much milder than TNF-blocking drugs, theoretically may combine with the drugs to worsen symptoms and increase risk for hospitalization and even death.  No dietary supplements alone have been linked with influenza-like hospitalizations or deaths.  It is the combination of TNF-blocking drugs with mega-dose natural anti-TNF supplements that is of concern.   It should also be noted that cancer patients undergoing chemotherapy are immune-compromised and flu-like symptoms may result.   Again, hospitalizations or deaths associated with TNF-blocking drugs and other anti-TNF agents may covertly contribute to the morbidity and mortality attributed to the flu. 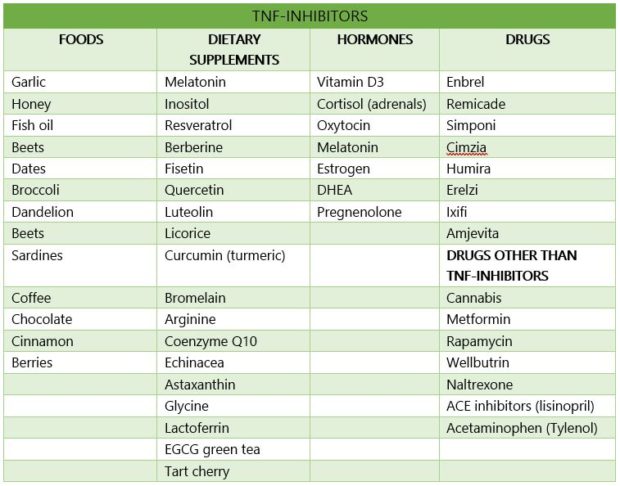 Analysis of US Food and Drug Administration (FDA) pharmacovigilance data reveals 714 cases of influenza reported in association with anti-TNF therapy in the 5-year period ending in 2008, including 7 deaths [FDA, 2009].  But the real numbers of cases and deaths are likely to be much higher.

An unsettling concern is that autoimmune disorders are rising in the population at large.  Between 2001 and 2009 the incidence of Type I autoimmune diabetes is reported to have increased by 23%.  Other autoimmune diseases are also on the rise.

One of the origins of autoimmune disease is believed to be molecular mimicry, that is, synthetic vaccines that utilize snippets of viruses that are structurally similar to microorganisms that cause infectious diseases may plausibly result in autoimmunity.  Some vaccines are associated with autoimmune conditions.  Autoimmune reactions to vaccines have been reported since the inception of vaccination programs.

For example, clusters of paralyzing Guillain Barre Syndrome (GBS) are associated with flu vaccination (SM Journal Vaccine Research 2015).  A 7.6-fold increased risk for GBS was revealed following 35 million flu vaccinations in 1976 which caused the National Influenza Immunization Program to be suspended in that year. (Note: for unknown reasons the journal cited above that reports this link between vaccination and autoimmunity cannot be accessed via the National Library of Medicine PubMed site.  Nor can it be accessed via Google.). Vaccine makers have a dandy business going, fostering the need for more and more vaccines and inoculations. 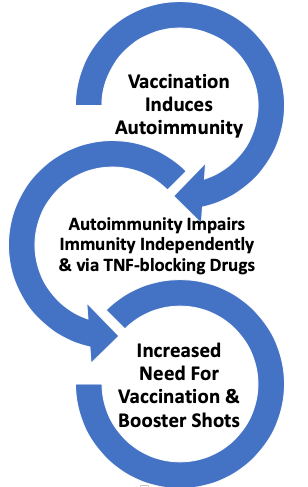 How many real cases of the flu?

So exactly how many real cases of influenza infection (not influenza-like infection) occur during a typical flu season?

In 2018 The Epoch Times published a chilling report entitled “How The CDC Uses Fear To Increase Demand For Flu Vaccines.”  In that report, data from Johns Hopkins University School of Medicine researcher Peter Doshi was presented.  Here is Doshi’s conclusive answer as to how many flu-confirmed deaths actually occur:

Setting aside pneumonia and looking just at influenza-associated deaths from 1979 to 2002, the annual average according to the National Center for Health Statistics (NCHS) data was only 1,348.

Illustrating the problem, Doshi observed that for the year 2001, the total number of reported pneumonia and influenza deaths was 62,034. Yet, of those, less than one half of one percent were attributed to influenza. Furthermore, of the mere 257 cases blamed on the flu, only 7 percent were laboratory confirmed. That’s only 18 cases of lab confirmed influenza out of 62,034 pneumonia and influenza deaths—or just 0.03 percent, according to the CDC’s own National Center for Health Statistics (NCHS).

As a health journalist, the most common question I am asked is whether to get a flu shot or not.  I hope this report authoritatively answers that question.  If you still don’t understand all this medical terminology, the bottom-line answer is don’t get duped by the flu propaganda.  The chances of you avoiding the flu are nil and the chance of developing a life-long autoimmune disorder is real.  Most of my friends and acquaintances who opted to get a flu shot got sick and were bedridden for a couple of days.  Supplemental vitamin D, C and zinc lozenges (preferably zinc acetate) may be helpful in the flu season.  Taking 50,000 units of vitamin D per day in a single dose (not an overdose) often rapidly halts a runny-nose cold.  Colds and flu occur in winter when sunshine vitamin D levels are low.  Once flu symptoms arise, resveratrol pills may halt viral replication altogether.

Opioid Crisis — A Result of Poverty, Availability, and PainA Tangled Web of Deception