Lessons From Atlas Shrugged: The Playboy

Ayn Rand’s 1957 dystopian novel Atlas Shrugged remains a controversial piece of literature to this day. It is generally remembered for its advocacy of free market capitalism, something hardly revered in the age of Sanders and Ocasio-Cortez socialism. While many chastise the book−some even proclaiming that they will “burn the book!” (yes, I actually knew someone who held this view; a bit reminiscent of Nazi Germany I must say) −perhaps some of us find it rather enlightening to the soul. Beyond its political implications, Atlas Shrugged provides for us a complex life philosophy to guide the rational man. In this series of articles, I will endeavor to take apart some of the “lessons” embedded in this philosophy.

What is the ultimate objective of Atlas Shrugged? Throughout the work, via the use of various characters, Rand points out the need for one to find purpose in life. For if one has no purpose, they are just aimlessly droning on. But Rand’s definition of purpose transcends the empty words of the cliché “find your purpose in life!” It is rather a yearning for a higher sensation which surpasses material satisfaction. This sensation is embodied in a number of things. Namely−accomplishment, influence, power (not political, but economic power gained through knowing you’ve satisfied the wants of consumers via voluntary exchanges). It is that feeling you get when you sit back, undetected by most, knowing how much you’ve changed society, how many dominos you have made fall, despite remaining under the radar. Hank Rearden’s dilemma, that is to say, trying to reach this higher sensation whilst being plundered by the state and the egalitarian mindset ingrained in society, paints this picture quite well. 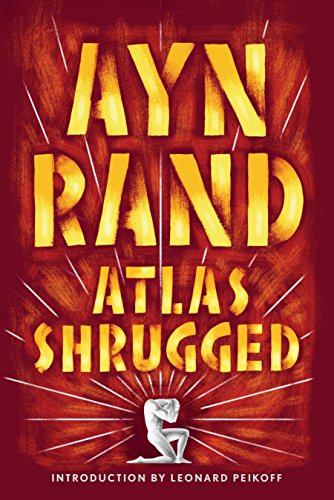 If Rand emphasizes the need for a purpose in life that transcends empty words, how could so many criticize Rand and Randians as mere materialists who are simply wasting resources that could be better allocated? If entrepreneurs (including aspiring) desire to reach that higher sensation as described by Rand, why are they admonished by society as “greedy bastards?” Why is it seen as a sin by their contemporaries for scientists to want to profit off of their discoveries, if they view this as a means to reaching that sensation (As is the case with the State Science Institute in Atlas Shrugged)?

The truth of the matter is that those individuals described above have nothing to do with the descriptions and pejoratives assigned to them by much of contemporary society. They are not plundering resources that should be redistributed to those “in need” (whatever this means). They are not engaging in hedonistic self-indulgence, contrary to popular belief. Rather, the material gains they take on are simply a means to that higher sensation. It provides something for the individual to look back and reflect on, allowing him to think “Damn. I actually did that.” Thus, the lesson to be presented here is Rand’s distinction between “the man with a purpose” and the playboy. And she brilliantly weaves this into a scene involving Hank Rearden and Dagny Taggart.

In the scene, Hank and Dagny were driving in a countryside and decided to stop at a very luxurious inn. Hank notices the types of people around him, commenting: “I’ve never despised luxury, yet I’ve always despised those who enjoyed it. I looked at what they call their pleasures and it seemed so miserably senseless to me−after what I felt at the mills. I used to watch steel being poured, tons of liquid steel running as I wanted it to, where I wanted it. And then I’d go to a banquet and I’d see people who sat trembling in awe before their own gold dishes and lace tablecloths, as if their dining room were the master and they were just objects serving it, objects created by their diamond shirt studs and necklaces, not the other way around. Then I’d run to the sight of the first slag heap I could find−and they’d say that I didn’t know how to enjoy life, because I cared for nothing but business.”

Hank then further comments: “Dagny, look at those people. They’re supposed to be the playboys of life; the amusement-seekers and luxury-lovers. They sit there, waiting for this place to give them meaning, not the other way around. But they’re always shown to us as the enjoyers of material pleasures—and then we’re taught that enjoyment of material pleasures is evil. Enjoyment? Are they enjoying it? Is there some sort of perversion in what we’re taught, some error that’s vicious and very important?”

In essence, Rand distinguishes the dichotomy of the individual and the object for both the man with a purpose and the playboy. For the playboy, material objects provide some sort of motivation and direction. They make the playboy feel content with himself. Since he lacks a guiding compass, a sense of purpose in life, he looks to these material objects to make himself appear grandiose and purposeful. In reality, he is very insecure in himself, and uses these material objects as a cover.

In contrast, the man with a purpose puts meaning into the objects themselves. That is to say, he reverses the dichotomy to signify that the objects deserve to be in his presence. For he has grinded his way to victory and has proven that he has a purpose in what he does. He has set himself as the standard through devoting countless years to making himself such. He can thus now look back upon it all and vindicate himself from the criticisms of cynics and sceptics.

Hank’s proclamation questioning if the playboys are really enjoying the material pleasures holds significant truth. For the playboy has no sense of accomplishment and is merely plundering his resources to quench his inferiority complex. We see this with rappers constantly bragging about the shoes and cars they have. On the other hand, the man with a purpose doesn’t view becoming rich as an ultimate end, nor a destination. Rather it is a means to and a reflection of his purpose, and a continuous journey in pursuit of bettering himself. If the collectivists want to admonish the latter traits as abhorrent, then they need to rethink their principles. For being rich and aimlessly droning on in life is no virtue. But how could reaching towards a purpose be a vice? Namely, what moral basis is there for society to strip one of their purpose?

We may now all ask ourselves: What sense does it make to say that all rich men are plunderers of resources and playboys (as society paints it)?

The Mark of the BeastBirth Control and Enstupidation