A review of Faith and Fury: The Rise of Catholicism During the Civil War (Ewtn Publishing, 2019) by Fr. Charles Connor

The abolitionists are wrong as to their point of departure. They begin, consciously or unconsciously, by assuming that the people of the United States are one people, not in the restricted sense in which they are so declared by the constitution, but in all senses, to the fullest extent, as much so as the people of France or England.

Even if Father Charles Connor does not go far enough in challenging the utopian narrative of American liberal progress in Faith and Fury:  The Rise of Catholicism During the Civil War, his extensive, meticulous, and scholarly treatment of the period in question brings to light numerous facts which have generally been overlooked.  Indeed, if we use Father Connor’s rich account as a starting point, we may well go on to wonder whether the information he relates has been overlooked and glossed over precisely because it is extremely embarrassing to 21st – Century American Catholic educators and scholars.  Such people are in the habit of accomodating mainstream American sensibilities even at the cost of politically “sanitizing” and misrepresenting the Church’s history and heritage. 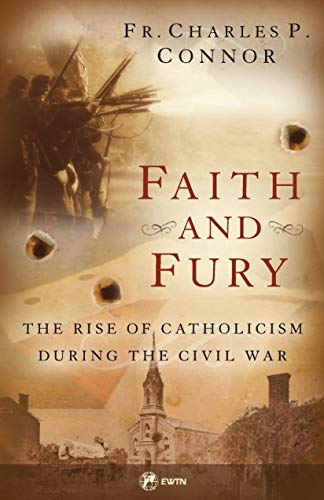 For even seminal figures like Archbishop John Hughes of New York prove utterly beyond the pale when viewed in light of mainstream sensibilities today, which would sharply condemn anyone who failed to be far enough on the “right side of history” with respect to the most sensitive issue of the War Between the States.  To be sure, “Dagger John” was, in his own words, “no friend of slavery,” and proved a staunch supporter of the Lincoln administration when war finally came.  On the other hand he was surely no friend of abolitionism either, as he denounced its  leaders as “infidels and fanatics,” and saw in the movement echoes of both Know-Nothingism and the Red Republicanism which had rocked Europe in 1848.  Not only did he see Nat Turner’s rebellion and John Brown’s raid as bloody terrorism, but he likewise condemned the abolitionist agitation from which Turner and Brown had drawn much of their inspiration.  Even if Hughes and other American bishops typically “condemned the slave trade, they were equally strident in their opposition to abolitionism and its anti-Catholic overtones.”

The discerning reader will find many other inconvenient and largely unknown facts lurking in this seemingly innocuous text.  How many Catholic history courses inform students about Harriet Beecher Stowe’s fanatically anti-Catholic father Lyman, who had “spelled out in detail the imagined specifics of a papal plot to gain control of Western territory and impose Catholicism’s fearful doctrines”?  How many Catholics have ever been told that during the postwar period the Union hero Ulysses S. Grant “effectively played the anti-Catholic card” during his presidential campaign?  By far the best part of Father Connor’s book lies in his use of original texts and extended quotations, however, for he thereby allows men of bygone eras to speak in their own voices:

“Most thankful I am,” wrote Supreme Court Chief Justice Roger Taney of Maryland, “that the reading, reflection, studies and experience of a long life have strengthened and confirmed my faith in the Catholic Church, which has never ceased to teach her children how they should live and how they should die.”  Having established Taney’s religious stance, Father Connor highlights a surprisingly civil albeit frank private exchange between Tayne and the abolitionist minister Samuel Nott.  On his side of the debate, the author of the brief for the Dred Scott case emphasized that his convictions regarding the law, the Constitution, and even the institution of slavery itself were not based upon any personal disdain for those of African descent:

More than thirty years ago I manumitted every slave I ever owned, except two, who were too old, when they became my   property, to provide for themselves.  These two I supported in comfort as long as they lived.  And I am glad to say that    none of those whom I manumitted disappointed my expectations, but have shown by their conduct that they were worthy of freedom; and know how to use it.

According to Father Connor, Tayne’s archetypally “conservative Southern mind,” in no way prevented the judge from exhibiting “a fairness of mind that went beyond the blind racial prejudice frequently found in his era.”  More importantly, “few would question the sincerity of his Catholic faith.”  Through such disclosures the serious Catholic reader finds himself facing a realization that is simply unutterable in the public square today, which is that the antebellum South was populated and led by human beings rather than by deranged amoral sterotypes recruited from the villains’ gallery of Marvel Studios.

Who Wins the Culture War, Wins EverythingGuns for Hire?