Since 1961, the American Academy of Pediatrics (AAP) has recommended that all newborns receive a vitamin K1 injection to prevent uncontrolled bleeding caused by vitamin K deficiency.1,2

Vitamin K1 is required for proper blood clotting, and newborns tend to have low levels due to the fact that vitamin K doesn’t cross the placenta very well. Deficiency can result in sudden internal bleeding — typically in the brain or intestines. This is referred to as “vitamin K deficiency bleeding” or VKDB, and can be life-threatening.

The data were based on infants born in Alberta, Canada. In the U.S., data6 presented at the 2014 CSTE conference reported the refusal rate at two Nashville, Tennessee, hospitals ranged from 2.3% to 3.7% in 2013.

A 2017 poll8 found the most common reasons given by parents for refusing the vitamin K shot were “perceptions of parents that the injection was unnecessary, lack of knowledge about vitamin K deficiency bleeding, and concern about preservatives.” 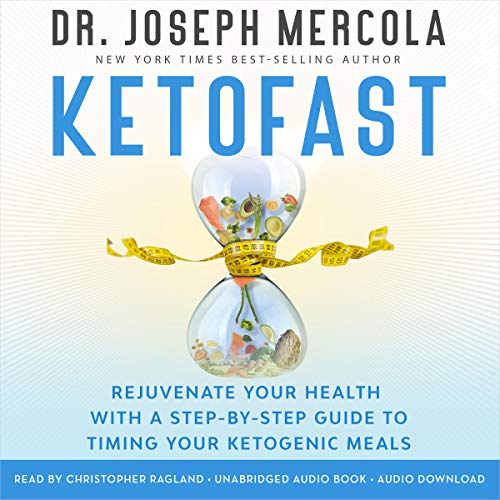 As reported by Scientific American,9 the 2014 Pediatrics paper10 found that children who did not receive the vitamin K shot at birth were also 14.6 times more likely to be unvaccinated at the age of 15 months. According to the authors:11

“This is the first population-based study to characterize parents who are likely to decline vitamin K for their infants and whose children are likely to be unimmunized. These findings enable earlier identification of high-risk parents and provide an opportunity to enact strategies to increase uptake of vitamin K and childhood immunizations.”

“Our finding of a link between vitamin K refusal and vaccine refusal was very concerning. We had expected a correlation between the two but had not expected the association to be so high.”

The correlation between vitamin K shot refusal and vaccine avoidance is turning out to have severe ramifications for many parents. In short, by saying no to the vitamin K shot, some hospitals are automatically labeling you a negligent parent and a dreaded anti-vaxxer in the making, so to speak.

A number of stories have emerged detailing how parents have had their newborn babies taken from them by simply because they declined the vitamin K injection. In a September 2019 article,13 The Daily Citizen describes the harrowing ordeal of Angela and Brian Bougher:

“The Christian couple believes that ‘God’s creation isn’t automatically deficient or flawed at birth’ and the shot is unnecessary. The Boughers have a right to their beliefs, and if they were fully informed of the risks then they should be able to decline. The state of Illinois didn’t see it that way.

Instead, in the moments after birth, a nurse told the Boughers that their newborn daughter was being taken away and they were being investigated for ‘medical neglect.’ It took 12 hours to get their daughter back.

It’s debatable whether the logic of Boughers’ decision is sound — however, medical professionals should know that the first moments of life are crucial to both mother and child. To remove a child for such a reason is a severe overreach of the state’s responsibility to protect children from neglectful parents.

The family’s pain did not stop there. Later the Illinois Department of Children and Family Services (DCFS) had law enforcement officers make an unannounced visit the Boughers’ home to investigate and determine if any of their other four children were being ‘neglected.'”

The Boughers and several other Illinois families who experienced harassment and investigation by the DCFS over refusal of the vitamin K shot have filed a class action lawsuit against local hospitals (Silver Cross Hospital, Advocate Christ Medical Center and the University of Chicago Medical Center), the AAP, the DCFS and several pediatricians. As reported by CBS September 24, 2019:14

“They want a compensation and a court-enforced guarantee that the Illinois Department of Children and Family Services won’t be called if parents refuse to give their babies a Vitamin K shot.”

Is the Vitamin K Shot Needed?

In 2010, I interviewed Cees Vermeer, Ph.D., an associate professor of biochemistry at the University of Maastricht in the Netherlands,15 and one of the world’s leading specialist in vitamin K.16 I’ve included it above for your convenience.

According to Vermeer, while vitamin K1 is necessary for newborns, the shot is not. There are far safer and noninvasive ways to normalize your baby’s vitamin K1 level. He points out several areas of risk associated with the vitamin K injection:

•The amount of vitamin K injected into newborns (0.5 to 1 milligram17) is far greater than needed

•The injection may contain benzyl alcohol,18 a preservative that may be toxic for the baby’s delicate immune system.

Preservative-free shots may contain a combination of polysorbate 8019 and propylene glycol20 instead,21 but these ingredients also have a questionable safety profile. For polysorbate 80, hypersensitivity and possible death are among the known risks22

•An injection creates an additional opportunity for infection in an environment that contains some of the most dangerous germs, at a time when your baby’s immune system is still immature

Perhaps most importantly, though, inflicting pain immediately after birth causes psycho-emotional damage and trauma to a newborn, which is both inappropriate and unnecessary.

In his 1999 paper, “Babies Don’t Feel Pain: A Century of Denial in Medicine,” David B. Chamberlain, Ph.D., a psychologist and co-founder of the Association of Pre-and Perinatal Psychology and Health, wrote:23

“The earlier an infant is subjected to pain, the greater the potential for harm … We must alert the medical community to the psychological hazards of early pain and call for the removal of all man-made pain surrounding birth.”

A 2004 study24 found that very early pain or stress experiences have long-lasting adverse consequences for newborns, including changes in the central nervous system and changes in responsiveness of the neuroendocrine and immune systems at maturity. Similarly, a 2008 study25 concluded:

Acute pain caused by skin-breaking procedures can lead to physiologic instability and behavioral distress, and it has downstream effects on subsequent pain processing, development and stress responsivity. Because of these detrimental effects, reduction and prevention of pain are worthy clinical goals that are also expected by most parents.”

Oral Vitamin K Is a Safe and Effective Alternative

The good news is there’s a completely noninvasive and pain free way to ensure your baby gets the vitamin K1 it needs: oral vitamin K drops, which are readily available for hospitals to purchase26 if they do not routinely stock it.

Oral vitamin K1 is absorbed less efficiently than vitamin K1 that is injected. However, this can easily be compensated for by adjusting the dose. And, since vitamin K1 itself is nontoxic, there is no danger of a bad reaction.

One reason oral vitamin K is not routinely used is because it requires multiple doses, and it’s feared new parents will forget to comply with the dosing. There are many variations in recommendations for the oral dosing. Among them: 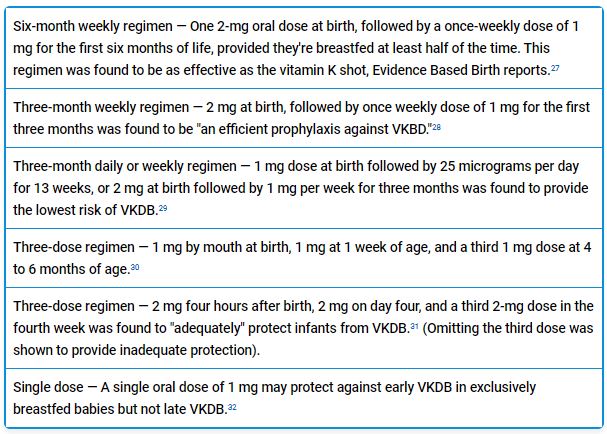 As noted by Vermeer, you can also increase your infant’s vitamin K level naturally if you are breastfeeding by increasing your own vitamin K level. The milk of lactating women has been tested, and most is low in vitamin K because the women themselves are vitamin K deficient.

If you take a vitamin K1 supplement, your milk also becomes richer in vitamin K, as you would expect. However, prudence is required — you need to make sure your vitamin K level is truly optimized, and for most women, the vitamin K absorbed from foods won’t be enough, so supplementation might be needed.

Discuss Wishes With Your Doctor Before Your Baby Is Born

Ultimately, the choice about whether or not to consent for your baby to be given a vitamin K shot is yours. For some, eliminating a source of avoidable pain right after birth is worth the extra work required to make sure your baby’s vitamin K level is optimized.

If you choose to not expose your child to a vitamin K shot and would prefer to have it given orally, you will have to make it very clear not only to your obstetrician but also the nursing staff, as they would be the ones who actually administer the shot.

The time to do this is well before your baby is born, to avoid getting into a nasty argument right after delivery. That way, you can make sure the hospital has oral drops on hand on the day of delivery, and for you to take home with you to continue the dosing.

One of the Most Powerful Videos I’ve Ever Seen

The following video from Barbara Loe Fisher is one of the most powerful videos that I have ever seen. I am hopeful that watching this video will inspire you to take up the cause and join the fight for vaccine freedom and independence.

There is a cultural war and collusion between many industries and federal regulatory agencies that results in a suppression of the truth about vital important health issues. If this suppression continues we will gradually and progressively erode our private individual rights that our ancestors fought so hard to achieve. Please take a few minutes to watch this video.

With all the uncertainty surrounding the safety and efficacy of vaccines, it’s critical to protect your right to make independent health choices and exercise voluntary informed consent to vaccination. It is urgent that everyone in America stand up and fight to protect and expand vaccine informed consent protections in state public health and employment laws. The best way to do this is to get personally involved with your state legislators and educate the leaders in your community.

It is critical for EVERYONE to get involved now in standing up for the legal right to make voluntary vaccine choices in America because those choices are being threatened by lobbyists representing drug companies, medical trade associations and public health officials, who are trying to persuade legislators to strip all vaccine exemptions from public health laws.

Signing up for NVIC’s free Advocacy Portal at www.NVICAdvocacy.org gives you immediate, easy access to your own state legislators on your smartphone or computer so you can make your voice heard. You will be kept up to date on the latest state bills threatening your vaccine choice rights and will get practical, useful information to help you become an effective vaccine choice advocate in your own community.

Also, when national vaccine issues come up, you will have the up-to-date information and call-to-action items you need at your fingertips. So, please, as your first step, sign up for the NVIC Advocacy Portal.

Boardwalk Babies No Crimes or Misdemeanors