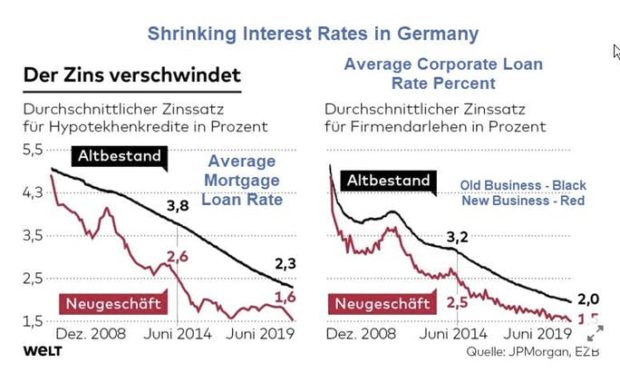 Anne Kunz and Holger Zschäpitz co-authored an excellent article for Welt (in German) called the Interest Rate Business Model is Dead.Here are some excerpts via Google translate with many of my own modifications. For example, the title itself is my translation, not Google’s.Google has the title as “Business Model With the Interest is Dead“.I made an educated guess that Google’s title isn’t quite right.

Translation errors below may be Google’s or mine. I took a fair amount of liberty, adding some words, deleting others, or changing the word order so the result makes sense to me.

Apologies to the authors for any of my errors.

The coup de grace came at the recent meeting. As ECB President Mario Draghi squeezed the negative interest rate for banks even deeper.

The ECB will restart its bond purchase program in November. This time, without a time limit. Thus, the monetary authorities have permanently chained the long-term interest rate at a low level and cut the profit opportunities of the financial sector to a level that isn’t sustainable. For a long time, institutions have made good money from the difference between long-term and short-term interest rates.That time is now over.

In 2016, Commerzbank employed more than 50,000 people. CEO Martin Zielke wants to close one-fifth of the 1,000 branches and even wants to part with an important source of income including his Polish subsidiary MBank. The workforce should be reduced to around 38,000 by the end of 2020.

The sale of Mbank is a desperate attempt at salvation.

In terms of stock market value, Deutsche Bank and Commerzbank are now loosely hanged even by more regionally active institutions from Norway and Sweden. [That is a direct translation that reads wrong but I do not know how to fix it].

Even the once proud Landesbanken is a restructuring case. This is a dangerous development.

“With the allowance, the ECB has relieved the German banks in the short term by around 500 million euros. At the same time, banks will be burdened considerably by the continuation of the low interest rates for an indefinite period, “says Peter Barkow, financial expert at Barkow Consulting. “Especially the German banks are very much dependent on income from the long-term investment of customer deposits at higher interest rates, called maturity transformation. This strategy only works very limited, “warns the expert. [The allowance refers to the ECB not charging banks a portion of the negative interest on excess reserves]

However, the corresponding earnings impact on the banks will only be delayed. “Many German banks have to find new sources of income in the medium term. In the short term, a further reduction in costs will probably be necessary, “says Barkow.

For more than a hundred years, banks lived on long-term lending or investing in securities their clients entrusted to them in the short term .

Historically, banks made money out of time. If time no longer has a price, because there is no more interest, nothing can be earned. Ten-year Bunds yielded around 1.5 percentage points more than two-year issues in historical terms. Currently, the difference is just under 0.2 percentage points.

In the multi-billion loan portfolios, the institutions are losing a lot of money due to ECB policy. Accordingly, the shares of Deutsche Bank and Commerzbank have fallen in sync with the interest rate differential. How dramatic the situation is for the banks, the analysts of JP Morgan have written down.

In a 120-page analysis, JP Morgan analysts calculated what effects the ECB policy will have on the banks. They used Japan as an example. Japan has had negative interest rates for some time now and there institutions have been unable to earn anything for two decades with time. The JP Morgan analysts’ conclusion: Interest margins could continue to shrink and continue to weigh on the earnings side.

“The negative interest rate policy of the ECB is ruining the financial system and is a socio-political poison,” says Frank Kohler, CEO of Sparda-Bank Berlin. The financial system is absurd if we have to explain to the children that money has a negative value – and thus debt is good, because you may not have to repay everything.

Thanks to Anne Kunz and Holger Zschäpitz for an excellent article and apologies again for any translation errors I may have made.

‘The Dam Could Break on Thursday’:The FBI’s Mindless ‘Mindhunter’ on Netflix