It has long been apparent to me that there are two Victor Davis Hanson, a very perceptive observer of current events and a historian with large axes to grind. When Hanson forgets about his second persona, he is capable of brilliant political commentary. For example, in American Greatness, he goes after the “woke identity movement” for all the right reasons. He pillories this group “whose obsessions with racial privilege and tribal exceptionalism are justified by accusing others of just such bias.” The “woke” ones, it is properly noted, combine bigotry with blatant hypocrisy. As a political commentator Hanson is always worth reading, especially when he’s discussing the immigration invasion and declining civility in California. His book Mexifornia describes the present situation in his native state as accurately as when it was written in 2003.

Then there’s (for me) Hanson’s less appealing side as a partisan historian. This Hanson can never keep his democratic missionary fervor out of his judgment of past events, whether he is talking about the Peloponnesian War, the American Civil War, World War One, or whatever other military topic he addresses. In his American Civil War, the Union valorously battled the evil “Confederate mind” that created this conflict singlehandedly. It was a “mind” represented by an elitist planter class which looked down at ”the deplorables” on the Union side. That sentinel of the old South John C. Calhoun is presented as the predecessor of Liz Warren and the present Democratic Party. 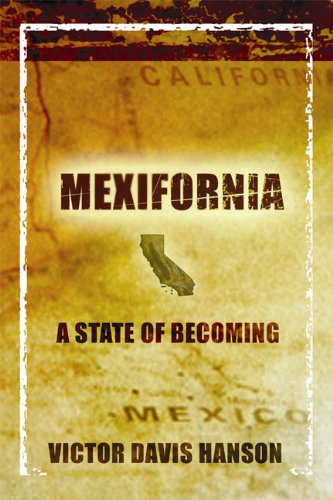 In the real tragedy more than 700,000 Americans died; and at least half of them were on the losing side. Soldiers on both sides were drafted; and recently arrived penniless Irish immigrants were cajoled into fighting for the North and South both. Although the abolition of slavery was one of the benefits of this costly conflict, a fondness for black servitude was not the main reason that most of the Confederate soldiers were fighting.  In fact most of these troops never owned slaves; nor did they seem particularly concerned about preserving the South’s peculiar institution, if we can judge by what they said and wrote about the war. Conflicts that divide entire nations are usually fought for more than one reason and are not reducible to good guy/bad guy characterizations.

In a recent column about how recent strife has “ripped off the thin scab that covered an American wound, revealing a festering disagreement,” we again see the two Hansons at work. Just about everything that Hanson tells us here about the takeover of California by the disruptive Left and the Antifa rioters is absolutely on target. In line after line he describes the descent of his beloved California into political and cultural madness. But then we encounter this stuff: “We’ve seen something like this fight before, in 1861—and it didn’t end well.” Pace Hanson, we didn’t see this fight occurring in 1861. The current bad blood between Right and Left is not a repetition of the American Civil War, and even that conflict cannot be reduced, as Hanson habitually does, to a contest between evil Southern slave-owners and a morally virtuous “democratic” Union.

Equally relevant: Although Open Borders radicals and Southern secessionists have both acted in defiance of federal authorities, so have lots of other historical actors, including Abolitionists and antiwar protestors. Although one can sympathize with Hanson’s distaste for crazed social radicals, he’d do well to stop comparing everyone who displeases him to Confederate politicians or Nazi leaders. Times and enemies both change.

Hanson also imagines that his enemies are people who question America’s moral superiority to every other human society that ever existed. He scolds Barack Obama for one of the few statements this president made that I happen to agree with: Obama thinks that “an ‘OK’ America is no better than other countries. As Barack Obama once bluntly put it, America is only exceptional in relative terms, given that citizens of Greece and the United States believe their own countries are just as exceptional. In other words, there is no absolute standard to judge a nation’s excellence.” Actually Obama began the statement that Hanson paraphrases by asserting that he does believe in “American exceptionalism” but “suspects” that other past political powers thought they were exceptional as well.

Apparently all secessionist groups in American history have questioned our exceptional character as a nation. It may never have occurred to Hanson that some of us who have no interest in overthrowing the government would find his proposition unseemly and boastful. Why does this mantra protect us against deep-seated internal divisions in a country where cultural and political differences are straining the bonds of union? Also noticing that the Greeks and British once viewed themselves as exceptional, the way Americans do now, does not suggest that there are no standards for judging “a nation’s excellence.” Rather it suggests that certain attitudes are characteristic of imperial powers at the height of their influence.

Attributes that Hanson ascribes to the “world’s wealthiest democracy,” riches, cultural dominance, etc., characterized past empires as well. I’ve no idea why acknowledging this obvious fact means that one is fixated on “America’s sins.” Hanson, who delights in presenting America as the righteous democratic warrior, would do well to consider the Bible’s warning about pride going before the fall.

What Comes After Trump? – PODCASTRecharge Anxiety