You would never know that the GOP won the last presidential election based on what emanates from the vocal chords of the Trumpian inner circle and the keyboard of its top banana. This stuff is just plain politicized economics, statist pretense and Keynesian hogwash.

The Donald’s keyboard is bad enough. Still, after a lifetime as a leveraged real estate speculator who apparently skipped Econ 101, why would he know any better?

But chief trade advisor, Peter Navarro, who supposedly has credentials, showed this weekend exactly what flavor of statist economics now reigns in the White House:

“I can tell you with certainty… we’re going to have a strong economy through 2020 and beyond with a bull market,” he told ABC News in an interview on Sunday morning. “The Fed will be lowering rates. The ECB will be engaging in monetary stimulus. China will be engaging in fiscal stimulus.”

Paul Krugman could not have said it better himself. Nor could have even Paul Samuelson, the supposed father of postwar Keynesian economics. And that’s to say nothing of J.M. Keynes, who is undoubtedly nodding approvingly from his grave.

Yes, by the lights of these folks, economic growth and prosperity is always and everywhere a gift of government. Without the guide rails and 24/7 support, prodding and “stimulus” of the fiscal and central banking branches of the state, capitalism would constantly come up short – punching way below its weight and, at length, wobbling, tripping and falling flat on its face.

Once upon a time, Republicans stood firmly against that hoary premise. They correctly identified state intervention as the enemy of prosperity, not it’s irreplaceable helpmate. They wanted free trade, free markets, a shrunken fiscal girth and a shackled Federal debt. The latter would grow only during war emergencies, not because a 3.7% unemployment rate threatened to rise in an election year.

Certainly, that was the creed of the great President Dwight David Eisenhower. Not only did he eviscerate Truman’s war-swollen defense budget by 35%, but spent eight years resisting calls for more spending and less taxes. He insisted first and foremost that the burden of the national debt had to be reduced, and that tax cuts needed to be earned by cutting spending and balancing the budget first.

Ike’s fiscal rectitude worked both inside the beltway and all across America’s main street economy from coast to coast.

As to the former, outlays in the FY 1953 budget he inherited from Truman amounted to $844 billion in today’s purchasing power (constant 2019 $), while the outgoing FY 1961 budget he handed-off to JFK posted at just $808 billion.

That’s right. Eisenhower was the only President since Coolidge to shrink Uncle Sam’s bloated girth in real terms. Even more importantly, he sharply reduced the Federal spending share of GDP. The latter was a smidgen under 20% of GDP when Ike took the oath, and just 17.9% in 1961 when JFK vainly suggested that American’s should “ask not what government can do for you, but……”

By contrast, the previous GOP dufus in the Oval Office, Bush the Younger, started with a FY 2001 budget handed off by Bill Clinton, which was 13% larger than the one he inherited from Bush the Elder (FY 1993), and proceeded to implement the GOP’s new “deficits don’t matter” mantra with, well, malice aforethought.

Bush the Younger raised constant dollar (2019 $) spending from $2.713 trillion in FY 2001 to $3.564 trillion in FY 2008. And here we are giving him the benefit of the doubt by excluding his outgoing, recession swollen FY 2009 budget, which did represent mostly his policies albeit the Fed’s recession (which he largely appointed).

Still, during Dubya’s first seven years, real Federal outlays grew by 31% or by $121 billion per year. By contrast, helped by the Fed’s new found printing press and the resulting tech and dotcom boom of the 1990s, the Clinton/Gingrich fiscal standoff resulted in real spending growth (2019 $) of only $38 billion per year.

Moreover, even if we charge Obama with the entire FY 2009 recession and “stimulus” swollen budget, the nine-year growth during his “big spending” tenure was just $73 billion per year (from $3.564 trillion in FY 2008 to $4.223 trillion in FY 2017) or only 60% of the annual spending gain under Bush the Younger.

Then again, as they would have said on late night TV: Nobody had seen nothing yet… until the Donald came along.

Based on our best estimates of defense, non-defense, entitlements and interest outlays after Trump’s “guns and butter” surrender on the debt ceiling two weeks ago, FY 2020 outlays in the same constant dollars (2019) of purchasing power will total $4.780 trillion.

That’s a 12% gain from Obama’s elephantine budget, and amounts to growth of $185 billion per year.

So roll-over every Big Spender who has ever placed his feet upon the Resolute Desk in the Oval Office. Like his Silver Spoon in the mouth real life birth, the Donald inherited an economy that was rolling on recovery momentum at the top of the business cycle.

To be precise, his tenure to date has encompassed month #91 through #121 of the present business expansion, and therefore represents the most benign fiscal environment ever inherited by a newly elected President. That is to say, safety net expense was at a bare minimum and has been falling sharply in real terms on an annual basis

Yet the growth rate of constant dollar spending on the Donald’s watch has averaged 4.22% per year, and there has been nothing like that since the Kennedy-Johnson “guns and butter” years. To wit, annual constant dollar outlays growth per annum has averaged:

Here’s the thing. Ike’s fiscal rectitude was not purchased at the expense of main street prosperity as both our modern Trumpite/GOP statists seem to believe, and as the orthodox Keynesians at the Fed and on Wall Street and in the Washington think tanks resolutely insist.

In fact, during Eisenhower’s term, real final sales grew at 3.0% per year after the post-Korean War recession ended, and real median family income advanced from $33,281 to $40,821 between 1954 and 1960 or 3.6% annually – a rate of gain not recorded during any presidential term before or since.

And that gets us to the topic at hand. The Donald’s incessant claims that the performance of the US economy during his first 10 quarters in office are entirely his doing are, well, entirely bogus.

To wit, the drift of the phony U-3 unemployment rate to rock bottom has always happened at the end of a long 100-month plus recovery. As shown in the charts below, the same thing happened in the 1961-1969 expansion cycle which lasted 105 months and the 1990s expansion cycle, which lasted 119 months. 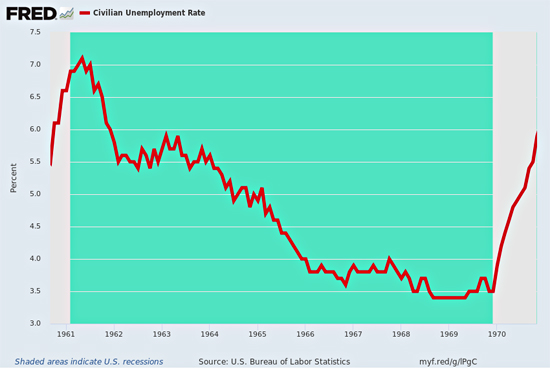 Of course, this plain old business cycle fact of life has been thoroughly lost on the Donald, although you might think that his multiple brushes with bankruptcy, which occurred during economic previous downturns, might have at least sensitized him to that unassailable reality.

Still, the cyclical story has been the same over and over: Peak performance levels are reached repeatedly and downturns always ensue.

Indeed, the other long (and record) expansion represented by the Greenspan Fed-fueled tech boom of the 1990s, which lasted 119 months, provides an even starker warning than the 1960s go-round.

Needless to say, the rearview mirror gazers of that era didn’t see a recession coming, either. And for a reason that is absolutely on point at present.

To wit, the rolling stock market crash after March 2000 is what brought the main street economy down as the corporate C-suites began to throw employees, inventories and “impaired” assets overboard in an effort to propitiate the Wall Street trading gods.

The bursting of central bank fostered financial bubbles, in fact, is the new catalyst for recession, meaning that charts like this one are lagging indicators waiting to be monkey-hammered by the next Wall Street crash – an outcome that the Donald’s unhinged policies and tweetstorms is virtually guaranteed to unleash, as we well elaborate in Part 2. 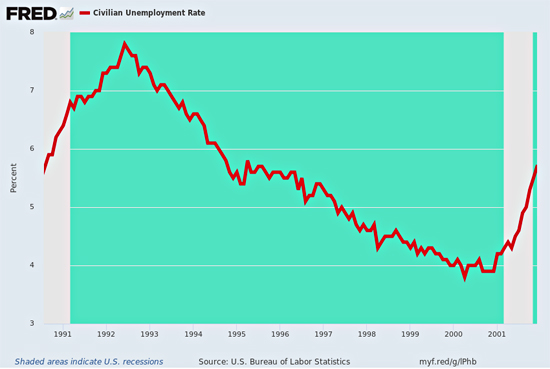 It could not be more evident that once a long expansion is in motion, the BLS’ primitive U-3 unemployment rate inexorably drops toward the lower right of the green panels displayed above. That is, the red line (U-3 unemployment) essentially embodies cyclical gravity at work – propelled by the underlying forces of capitalist growth.

So what is really happening is that despite the burden of Washington economic meddling, regulation, taxation, fiscal debt and egregious money printing, private capitalism has soldiered forward since the Donald stumbled into the Oval Office owing to the freakish election of 2016.

Not withstanding the Fox News versus CNN sideshows, workers, businessman, entrepreneurs, inventors, innovators and investors have pushed the US economy forward, with real final sales (which excludes short-term inventory swings from GDP) expanding by 2.74% per annum.

And that’s only slightly worse than what they were able to accomplish against the headwinds of the Obama policies, when real final sales grew at a 2.87% annual rate during the final 10 quarters of Barry’s tenure.

Likewise, during the Donald ‘s first 31 monthly jobs reports, the so-called jobs added number has averaged 193,000 per month, which compares to 220,000 per month during Obama’s last 31 months.

Stated differently, neither the Donald nor Obama had anything to do with these flawed but standard measures of main street economic performance. These middling outcomes were the work of private capitalism grinding forward against the roadblocks of state intervention.

So the visible results that the Donald endlessly boasts about are a scam. He’s essentially claiming credit for the economic sun rising every morning.

But what is welling up below – the more invisible part – is a policy disaster. The absolutely wrong policy at any time in the business and credit cycle is Trade Wars, Fiscal Debauch and hideously Easy Money. But under the circumstances of 2019 those policies amount to an epic disaster in the making, as we will elaborate further in Part 2.

Indeed, what is going on down below in the policy arena is no longer even so invisible. During the two weeks since the abominable debt ceiling deal, the US Treasury has borrowed the staggering sum of $363 billion – essentially to pay the bills that had been shoved into the drawer when the last debt ceiling suspension expired in March.

In any event, the net public debt is now up by $2.7 trillion during the Donald’s 31 months in office, and that too is a record rate of gain at a time when by every canon of even Keynesian fiscal policy – and the teachings of the aforementioned J.M. Keynes, Paul Samuelson, Paul Krugman – it should be shrinking or at least stabilizing. 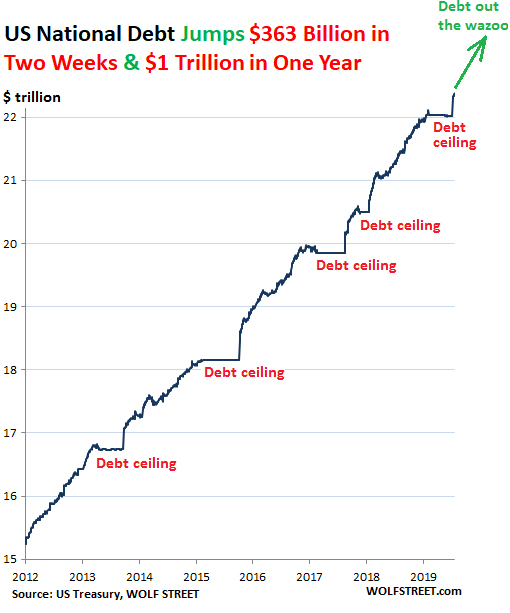 So the very idea of boasting about the data prints of a badly impaired, debt-entombed 121 month-old business expansion and a speculation driven 124 month-old bull market smacks of rank amateurism and stunning political naiveté.

It’s as if the Donald is joyfully carrying around a platter and inquiring about where exactly to place his head – a question which will answer itself soon enough.

Study Links Fluoride in Tap Water During PregnancyWhat Will They Learn at College?