Perplexing Health Problems May Be Resolved With Acid Pills

Your doctors can’t figure out what is ailing you.  You are plagued by a number of disparate symptoms that don’t appear to be related.  Chronic stomach problems (chronic bloating, burping, flatulence, diarrhea, undigested food in stool), fatigue, brain fog, brittle nails, recurrent intestinal infections, allergies, asthma, the appearance of tiny blood vessels on the cheeks and nose, unexplained acne, and nausea when taking vitamin pills may have a common origin.

You may even chronically suffer with skin conditions like psoriasis, vitiligo and eczema.  You may lose weight for no reason.  You may experience regurgitation of stomach acid into your esophagus that results in painful heartburn.  In a misdirection, your doctor may then prescribe an antacid.  You may have had your gall bladder surgically removed and you still find no relief from your symptoms.  You don’t know whether to eat or skip eating because of all the symptoms you experience.

The lack of stomach acid is often the cause of these symptoms and conditions.  The remedy is simple: supplement your diet with acid when eating. 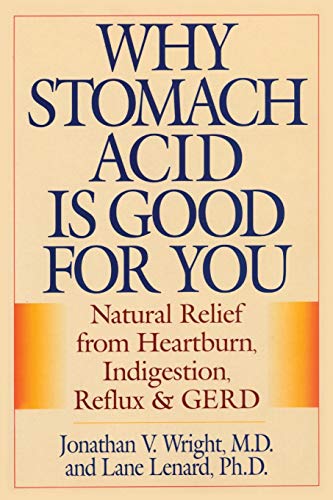 Indigestion could be caused by low stomach acid, which affects over 50% of the population.

According to a report published in the American Journal of Digestive Diseases, the incidence of achlorhydria (absence of stomach acid) was 19% in the fifth decade of life and 69% in the eighth decade of life.

It has been estimated 30% of U.S. men and women older than age 60 have atrophic gastritis, a condition in which little or no acid is secreted by the stomach.

Corrective supplemental acid is required in the form of betaine (aka trimethylglycine), widely available as a dietary supplement.  Betaine is safe and has a track record over many decades.

There is considerable attention being given to the makeup of bacteria in the human gut (stomach and intestines).  The bacteria that reside in your digestive tract (called microbiota) change when less stomach acid is secreted.

Humans don’t consume totally sterile foods.  There is a small bacterial and fungal count in foods.  Acid wards off the pathogenic (disease causing) bacteria that commonly enter the digestive tract.  However, unless an acid environment is maintained in the digestive tract, bacteria and yeast (fungi) normally found in the lower digestive tract (lower intestine) will overgrow as well.

Humans are not conscious of the fact hydrochloric acid (HCl) secretion sterilizes the stomach against orally-ingested food-borne bacteria and fungi.  Lack of stomach acid can be a life-or-death issue.  Few if any physicians would link the growing mortal threat of Clostridium difficile infections with low stomach acid secretion.  However, there is a growing body of evidence linking antacid use with gastric infections.

Brittle bones due to lack of acid

You may be a post-menopausal woman who takes calcium supplements but still cannot pass your bone density test.  You can’t imagine the supplemental calcium you take isn’t being absorbed due to the lack of stomach acid.

Medical schools misdirect physicians to focus on excess stomach acid and the prescription of acid inhibitors and blockers.  Acid blocking drugs (proton pump inhibitors) can impair absorption of calcium to the point where bones weaken and fractures result. Mortality after a hip fracture is 20%. Among those who survive, 1 in 5 patients require nursing home care.

You may take a multivitamin to ensure you have no shortages of essential nutrients.  But you may still be nutrient deficient due to lack of stomach acid.

A number of years ago geriatrician John Morley reported that even vitamin supplementation did not totally resolve nutrient deficiencies.  Here were the results of his study: 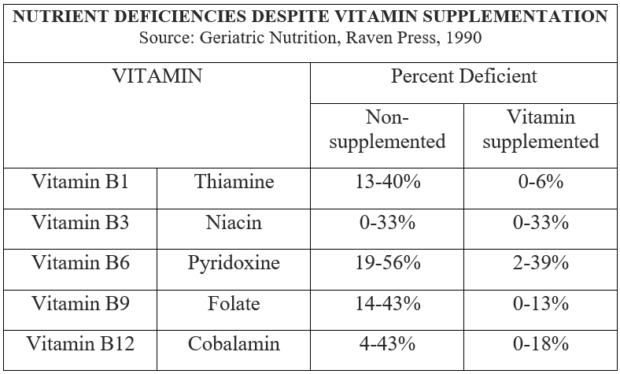 Dr. Morley attributed this problem to the lack of stomach acid.

Essential minerals such as calcium, magnesium and zinc and essential B vitamins (particularly B12) and vitamin C all require stomach acid to be absorbed.

You are playing Russian roulette when you take antacid pills to quell heartburn.  Not only does bacteria overgrow without acid but nutrients like zinc and vitamin C are poorly absorbed, resulting in a weakened immune system.

Health authorities say 60-200 milligrams of vitamin C per day obtained from the diet or supplements is sufficient to maintain health.  But the lack of stomach acid is not considered.  Low vitamin C levels are common among individuals with low stomach acid.

If you are short of breath climbing stairs and find you are anemic and have low iron levels even though you eat highly absorbable iron-rich red meat or take iron pills, you may be low in stomach acid.  Given that iron pills induce constipation and nausea, enhancing iron absorption from the diet may be a better option than iron pills.  In one study 44% of patients with iron-deficiency anemia had low stomach acid levels.  Acid pills are in order.

While doctors know a common bacterium that infects millions of adults and children, known as Helicobacter pylori, shuts off stomach acid secretion, you may have tested negative for that bacterium.  Problematic antibiotics are used to eradicate H. pylori (but zinc carnosine is an effective natural antidote).  Maybe H. pylori infection has damaged the parietal cells that secrete stomach acid to the point where the lack of stomach acid can’t be reversed with eradication of this stomach bacterium.  Then sufferers have to totally rely upon acid pills to fully digest and absorb nutrients for the remainder of their lives.

Bile, produced in the liver to help digest fats, is stored in the gall bladder, a “squirt gun” for hydrochloric acid that stimulates the gall bladder to contract.  Low stomach acid is common among patients with gallstones, occurring in 52% of patients in one study.

Another cause of low stomach acid

Naturopathic physician Jonathan E. Prousky provides convincing evidence that the lack of vitamin B3 (niacin) is another major cause of poor stomach acid secretion.  If the minimal intake amounts of niacin B3 are not met (somewhere between 5.5-13.0 mg per day), within 1-2 months the tissues become depleted, biochemical abnormalities occur, and clinical features of vitamin B3 deficiency (pellagra) eventually develop, says Dr. Prousky.  Diarrhea, dermatitis and dementia characterize the clinical manifestations of pellagra.  He thinks vitamin B3 shortage is more responsible for lack of stomach acid than H. pylori.

One word of caution.  If you already know you have gastric ulcers, acid pills may be problematic.  Since common pain relievers like ibuprofen and aspirin may induce ulcers, their co-use with acid pills (betaine) is not advised.

Conventional medicine is not the only party that is misdirected when it comes to understanding acidity/alkalinity.  Alternative medicine mistakenly promotes alkaline diets for health and cancer prevention.  But tumor cells feed on sugars and excrete lactic acid independent of the diet.  The area outside a tumor cell is acid, not the tumor cell itself.  This surrounding acidity is what repels anti-cancer drugs and induces tumor/drug resistance.  There is little if any evidence that an alkaline diet can prevent cancer.

Confusion reigns over pH (acid-alkaline) balance in the body.  The pH of the blood must be maintained at near neutral pH (7.2-7.4) so as not to destroy red blood cells.  While alkaline diets are widely promoted among health advocates, they cannot alter blood pH.  The kidneys perform a natural role of reducing acid and regulating body pH.

The True Nature of SocialismTulsi’s Fight Against Big Tech