Moon of Alabama published an article recently on Turkey’s purchase of the Russia S-400 system and included a tweet from “government controlled Turkish news agency Anadolu made it abundantly clear what the system is supposed to target. When it announced the news of the arrival it attached the picture below to its tweet” and here’s a screen capture of the Tweet: 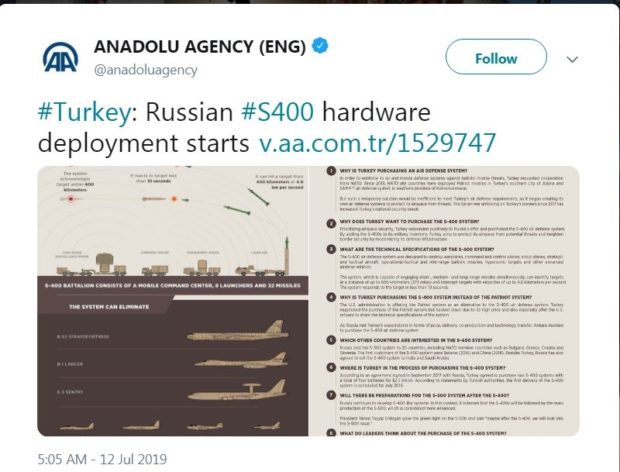 Moon of Alabama posted the entire image and I couldn’t help laughing. All that’s missing from the potential targets is the F-35. But you’ll note all of them are American systems. It’s easy to guess that Turkey is defending itself from any bombing campaign instigated by Washington to initiate “regime change.” 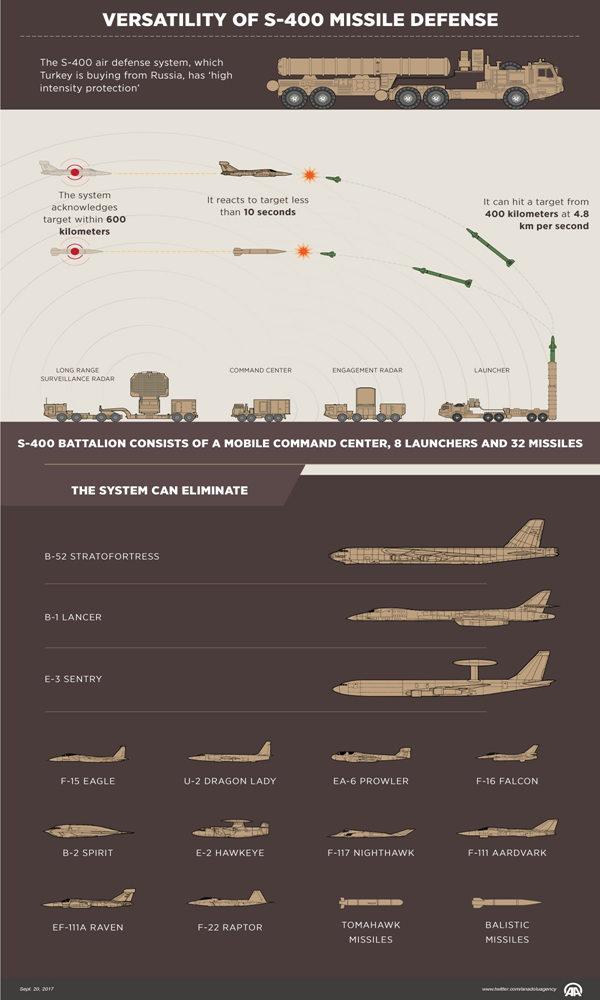 As I’ve written on LewRockwell.com, backed by experts, VLO or stealth is essentially marketing hype. Russian historian and military analyst Andrei Martyanov discussed the S-400 deal on his blog:

I want to clear the air from the very start: Turkey knows what [the] F-35 is and that is why she will “survive” cancellation of F-35 deliveries. F-35 for Turkey, who produced a number of parts for this aircraft, was primarily of industrial interest. So, all this contrived BS about security issues is just that, BS. Modern Air Defense complexes, such as S-400, even in their export version, can detect, track and shoot down all those VLO (Very Low Observability) targets such as F-35. The only “security issue” here for the United States was the fact that having “live” F-35 and S-400 simultaneously by the key member of NATO would have revealed publicly (in professional circles it is known well already) all [the] massive faults with F-35 in general and ONLY-VLO-centric combat aircraft concept in particular.

Martyanov wrote an entire short piece on “Radiophotonics” here, entitled, “Radiophotonics, Again” and this is a relevant excerpt, since I have no engineering or technical background:

This morning, however, some interesting news—it does exist, it is in the process of trials and addressing its inevitable issues (in Russian), and that means the end radio VLO as such in a very near future. Not that VLO is that much useful now in high end peer-to-peer warfare but ramifications of radiophotonics radar being deployed in the modern battle-field are immense and have strategic implications. This also explains Russia’s rather calm and confident reaction in the last 20+ years to US radio VLO (Stealth) developments since modern signal processing and sensor fusion techniques allow for a very effective countering of “stealth” targets.

In fact, at this stage any further investment into VLO technologies seems to be just a waste of time and money or, as Commanders Gattuso and Tanner wrote 17 years ago (in relation to CVN(X)), it is:

like polishing cannonballs so they will fly a little farther

An article on the “massive faults” of the F-35 posted on Defensenews.com entitled, “The Pentagon is Battling the Clock to Fix Serious, Unreported F-35 Problems.” No doubt the taxpayer will be on the hook to fix these problems—more billions, at the least. I lack the expertise to determine whether the F-35 will be viable but an informed source in private communication opined:

My personal guesstimate is that the F-35 will eventually become a capable command post and a capable ground strike platform. It is stealthy enough to be used against primitive enemies but has absolutely NO chance against Russia [and China] and her integrated air defense network (including ground stations, AWACS and the typical mix of MiG-31BM, Su-34, Su-30SM, Su-35S and Su-57).

In terms of air-to-air, the F-35 (all versions) suffers from bad aerodynamics, poor thrust-to-weight ratio, poor range, poor speed, poor armament and an inadequate (under-powered) radar.  One US specialist said that a first-generation F-16 could beat the F-35 in a one-on-one air-to-air combat. So they will be used under the protection of F-22s and only in theaters where the opposing forces has poor to medium air defenses (Syria and Iran are both in that category, with the exception of some better protected locations).

Bottom line: the US is screwed. There are BILLIONS riding on the F-35 program and no alternatives in the foreseeable future.

From the Defensenews.com article this excerpt is relevant: 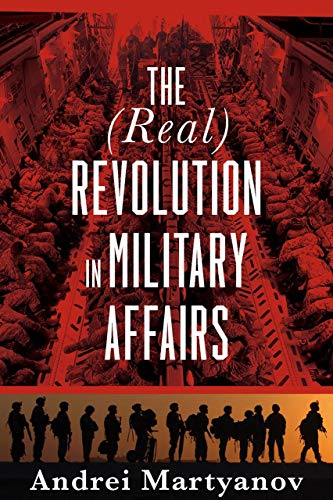 The status of deficiencies

According to a June 2018 report by the Government Accountability Office, the program had 111 category 1 deficiencies on the books in January 2018. By May 24, 2018, that number had decreased to 64 open category 1 problems out of a total 913 deficiencies, according to one document obtained by Defense News.

Another document obtained by Defense News noted that at least 13 issues would need to be held as category 1 deficiencies going into operational tests in fall 2018.

“They are not catastrophic. If they were, they’d have to stop test. There’s nothing like that,” he said. “They will be straightforward software fixes. We just need to get to them.”

Also of interest is this YouTube video interview (and please note YouTube might take it down)  of engineer and Defense Analyst Pierre Sprey, who was involved in several successful U.S. military aircraft designs discussing the F-35 (years prior to the above report) in which he essentially states, “The F-35 Is an Airplane Build For a Dumb Idea,” meaning that it was designed for mutually contradictory purposes; the need for a vertical takeoff design required stubby wings, which consequently reduced its maneuverability in flight. Like so many weapons programs of Washington, its purpose is primarily a profit center.

In case it’s removed here’s the official Fifth Estate video interview with Pierre Sprey but perhaps since it shows the F-35 in a negative light this too will be removed by Google:

This Russian video from Vesti News Service, with English subtitles, highlights how in the free market of weapons sales, Russia is superior (to the expert) to America because it’s a reliable partner; the fact that Washington is canceling the F-35 sale to Turkey while Russia sticks to its deals means it is becoming a more reliable supplier of weaponry. It’s an interview with military expert Alexey Leontov on the sale of the S-400 to Turkey; he makes the point I find apt and interesting that Washington didn’t raise a stink when Greece received a similar (export model) of the S-300 system:

From Martyanov’s post S-400 Is In Turkey cited above, he also makes similar conclusions about the baleful state of U.S. foreign policy:

For starters: Patriot is NOT equivalent of the S-400 with S-400 being superior in its key performance characteristics. Secondly, I agree with Trump in a sense that “you can’t do business like that” and this has nothing to do with Turkey but with the United States which is now in full economic warfare and political bullying with most of the world. The inevitable question thus–who in their mind would do business with the country which is ungovernable and both has no competitive systems to offer and may stop (or disable) their procurement any moment? Only spineless Europeans, maybe. India was explicit in basically telling the US to mind its own business re: India’s $5 billion contract with Russia for S-400. Pakistan, India, many others, including Gulfies want S-400 and other Russian weapon systems. We know what the United States will do–she will try to sabotage any Russia’s effort across the whole spectrum of international economic activity, be that Nord Stream-2 or arms trade.

For Turkey, however, it seems, S-400 is not just military or, inevitably, geopolitical reorientation issue, with Ankara beginning to understand where her real interests lie. In the end, Turkey sees on the horizon the access to technology transfer not only for S-400 (its export version, of course) but eventually for export versions of SU-35, SU-57 and, inevitably, S-500 and who knows what else. So, there is a lot to be taken in at this moment but as I said many times, Russia has the ability and instruments for defense of larger Eurasia, plus, in Turkey’s case, deliveries and deployment of S-400 boost Turkey’s regional standing, including in disputes with Greece and Cyprus. It is enough to look at the map of the region to understand why S-400 changes Turkey’s status in Eastern Mediterranean. As stated by Russian MoD (in Russian) the second gigantic An-124 will leave for Turkey with another set of S-400 equipment shortly, the balance, which is 120 missiles, will be delivered by the end of this Summer by sea-route.

As an American, I see that our current state of engineering of aircraft obviously faces difficulties, further proof of the decline of America and also proof the nation is not “exceptional” aside from hype. Moon of Alabama’s German software IT expert Bernhard has written on the issues of the Boeing 737 Max most recently here in this piece, “The New Delay Of Boeing’s 737 MAX Return Will Not Be The Last One,” which includes links to prior articles with excellent technical details on the deficiencies of the hardware and software and the dolorous prospect of yet another taxpayer bail out of an incompetent “too big to fail” or at least too big pay its own bills for its own mistakes corporation, in this case Boeing and not banks.

In this environment, wouldn’t it be wiser for calmer heads to prevail and to act with less belligerence than the Trump Administration is showing, making adversaries out of former allies like Turkey? LewRockwell.com recently posted this piece:  Shifting Alliances: Is Turkey Now “Officially” an Ally of Russia? Acquires Russia’s S-400. Exit from NATO Imminent? My speculation would be that Erdogan wants the best of both worlds, that is, “goodies” and trade with Russia, China, America and the EU and I don’t think Washington will be able to force Turkey from NATO. He’ll play all sides but I have no idea if he’ll succeed.

But only time will tell.

Meanwhile, the wily Turks gave me a good laugh, if nothing else, with their graphic. More and more countries are resisting Washington’s overbearing manner. Given the flaws of the F-35, Washington and the Military Industrial Complex needs all the customers it can get; I think its decision to deny Turkey the F-35 “turkey” was a major strategic and tactical mistake.

On the other hand, perhaps the fact that VLO or stealth doesn’t work has precluded bombing Iran; Washington wouldn’t be able to cover up (completely) the loss of aircraft, and think of the customers that will be beating a path to Russia and/or China’s door for fighter jets. Let’s see how the game plays out with India and Turkey.

Let me end by sharing this video of the Russia’s Su-57 fighter jet; I’m sure the jet is not perfect but I suspect not only that it’s cheaper than the F-35 but it lacks its critical flaws. What happens now is anyone’s guess and I hesitate to speculate but I think team Trump will keep sanctioning the world; I don’t think this will “MAGA” by any stretch of the imagination. And I wish the genius involved in developing these weapons systems could have instead been put to use for peaceful purposes; I will have to dream on.

Previous article by Yvonne Lorenzo: Climate Change in a Climate of Ignorance

Did the US Military Cause Lyme Disease?60 Years of Wasting Money in Space