The Hijacking of American Nationalism

Because it's so different from its European variants, the Left and even the neocons have claimed it as their own

Just recently, John Judis, undisguisedly a political commentator of the Left, made an important argument in favor of nationalism. “Nationalist sentiment,” he writes in his book The Nationalist Revival, “is an essential ingredient of a democracy, which is based on the assumptions of a common identity, and of a welfare state, which is based on the acceptance by citizens of their financial responsibility for people whom they may not know at all, and who may have widely different backgrounds from theirs.”

Of course, nationalism can be “the basis of social generosity or of bigoted exclusion.” It is therefore important, according to Judis, that enlightened state leaders push nationalism in the proper direction.

Judis points out that while “globalism” is a force that nationalists understandably oppose, “internationalism” need not clash with nationalist sentiment. In an op-ed in The New York Times last October, Judis praised his kind of nationalism as being beneficial to a successful and growing welfare state and a happier world. It can also be, he said, a stepping stone that leads beyond itself to international cooperation. 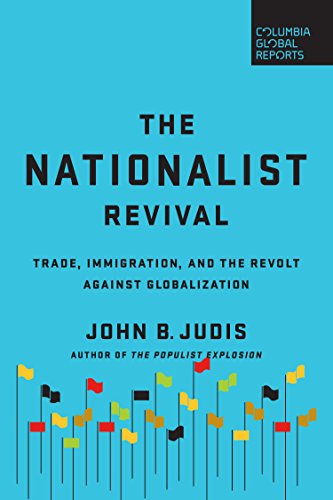 For those who study European socialism, it is clear that Judis is reprising the position of French sociologist Pierre Bordieu, who argued for decades that a socialist regime must create some kind of social glue to hold its subjects together. Judis is now transferring Bordieu’s view to the American political scene.

Now, a conference on “conservative nationalism,” which will take place in Washington in July, may be pushing a “nationalism” that is at least as adaptable as Judis’s. One featured speaker, Claire Lehmann, the founder of Quillette, will be talking about how nationalism “is the antidote to racism.”  Presumably, the more inclusive the operative term, the less likely will be the Left’s attack on those wielding it.

The presence of Daniel Pipes and other neoconservatives at this gathering also suggests that at least some of the panelists will be offering two approved concepts of nationalism: propositional nationhood for the United States and solidarity with Israeli nationalism. In both cases, however, the nationalism being advocated ends up tied to an aggressive foreign policy.

Nationalism, in any case, means different things for different peoples. It doesn’t hold the same meaning for Estonians or Hungarians, who belong to ethnic, historic communities, as it does for a pluralistic country with hundreds of millions of people and a constantly expanding immigrant population.

In the latest issue of the Rassemblement National monthly L’Incorrect, Steve Bannon speaks of the natural fit between European nationalism and the nationalist movement that he has been promoting in the United States. Both these ideologies, Bannon says, derive from the same national principle. In an interview with me in the same publication, I treated Bannon’s contention as wishful thinking. The United States has become too diverse and too culturally disunited to fit a traditional national model. Our use of nationalism will likely lead to something less quaint and less organic but more explosive than what comes from the Baltic nationalists or Viktor Orbán.

Previous article by Paul Gottfried: How Not To Argue Against Abortion Rights