5G Technician Reveals The Damage He Believes 5G Will Cause

The rollout of 5G is another great example of how our federal health regulatory agencies have been completely compromised by big powerful corporations. You would think with more than 10,000 peer-reviewed studies showing clear danger with regards to electromagnetic radiation overdose, something our planet is experiencing, that these technologies would be required to go through some safety testing. The truth is, if they went through any type of safety testing there is no way they would be approved. The studies that have already been published show clear links to neuropsychiatric disorders, reduced sperm count, brain damage and cancer among other serious ailments. The science is quite clear.

Now those being trained to install these new technologies are starting to see the dangers quite clearly, one man has decided to speak out on the topic. 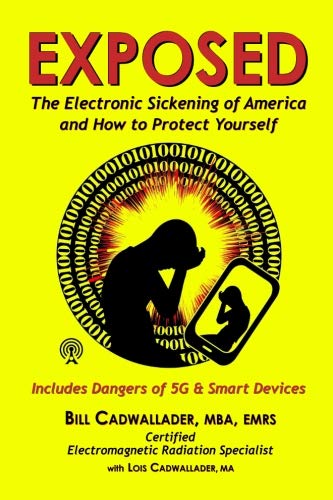 His name is Ian Furgeson, and he’s put up this video that went viral on Facebook, bringing many more people into the conversation who might have previously been unaware of this issue. He also put it up on his YouTube channel, where you can watch what he says below.

He explains how he is a tower climber that installs the equipment that allows telecommunications to function. He is currently in 5G training, explaining how he is already concerned about the technology, even before he learned about the science about it. He explains how the radio frequency is very different from the radiation that is currently being beamed out by cell towers, which has still proven to be harmful. 5G is incomparably more harmful and more intense. He explains how 5G is going to broadcast in gigahertz, not megahertz, which is 15000 times stronger than what we are receiving now.

With the science being so clear on this, people like Martin L. Pall, PhD and Professor Emeritus of Biochemistry and Basic Medical Sciences at Washington State University outlined in a new report the many health risks associated with 5G technology and wireless radiation in general. In it, he stated that 5G is the “stupidest idea in the history of the world.”  You can read more about that specific story here.

Health professionals are gathering more and more to create awareness about this, which is very encouraging. For example, Dr. Sharon Goldberg, an internal medicine physician & professor recently gave her testimony regarding the dangers of electromagnetic radiation. She says: “Wireless radiation has biological effects. Period.” You can watch that testimony here.

Doctors treating patients from over-exposure to wireless radiation joined scientists at Queen’s Park (Toronto) gathered to recommend the Ontario Government take steps to protect public health before the roll-out of 5G cell phone technology. In this public hearing, Dr. Anthony Miller, Professor Emeritus with the University of Toronto, and adviser to the International Agency for Research on Cancer said: “Many scientists worldwide now believe that radiofrequency radiation should be elevated to a Class One human carcinogen, on the same list as Cigarettes, X-Rays, and Asbestos.”

There are similar statements from other academicians,  Dr. Martin Blank, Ph.D., from the Department of Physiology and Cellular Biophysics at Colombia University makes the point quite clear: “Putting it bluntly they are damaging the living cells in our bodies and killing many of us prematurely” (source)

If you want to go through the science and access a lot of the research in this field, a great place to start is with the Environmental Health Trust.

Progress, however, is being made. A Belgian government minister, for example, has announced that Brussels is halting its 5G plans due to health effects.

We here at Collective Evolution are also doing our part, we are planning to do a deep investigation into the telecom industry, it’s ties to politics, and expose its efforts to push 5G while ignoring the dangers and without proper safety testing. But with all of the censorship and demonetization we are experiencing, we can’t do it without your support.

You can join this campaign to help stop 5G here.

Since we’ve seen the since, and heard from a number of health professionals, scientists and journalists on this topic, I thought it would be a good idea to present a video of someone who works directly with this type of technology. Remember, there are workers out there installing this technology, and have been working on cell phone towers, for example, for a number of years.

The Hijacking of American Nationalism No, Autos Are Not “Cheaper Now”