The New York Times has published an anonymously sourced report titled “U.S. Escalates Online Attacks on Russia’s Power Grid” about the “placement of potentially crippling malware inside the Russian system at a depth and with an aggressiveness that had never been tried before” which could potentially “plunge Russia into darkness or cripple its military,” with one anonymous official reporting that “We are doing things at a scale that we never contemplated a few years ago.”

Obviously this is yet another serious escalation in the continually mounting series of steps that have been taken into a new cold war between the planet’s two nuclear superpowers. Had a report been leaked to Russian media from anonymous Kremlin officials that Moscow was escalating its cyber-aggressions against America’s energy grid, this would doubtless be labeled an act of war by the political/media class of the US and its allies with demands for immediate retaliation.

To put this in perspective, The New York Times reported last year that the Pentagon was pushing for the US Nuclear Posture Review to include the strategy of retaliating against serious Russian cyberattacks on American power grids with nuclear weapons. 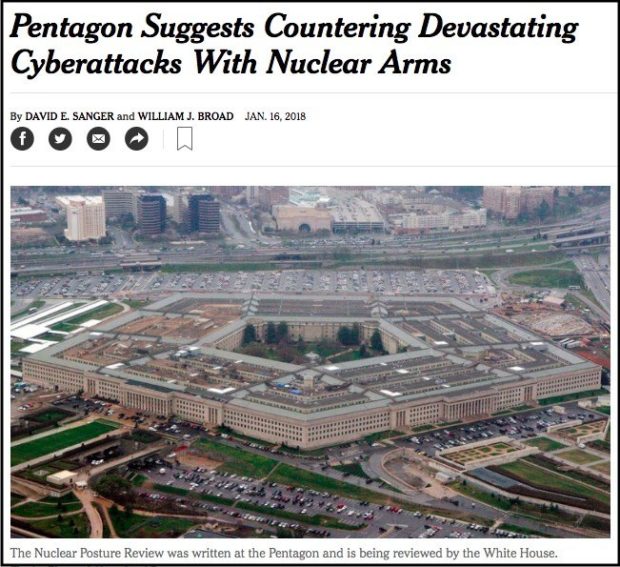 So that’s scary enough. What’s even scarier is the information that the Times buried way down in the 21st to 23rd paragraphs of its report:

“Two administration officials said they believed Mr. Trump had not been briefed in any detail about the steps to place ‘implants’ — software code that can be used for surveillance or attack — inside the Russian grid.

“Pentagon and intelligence officials described broad hesitation to go into detail with Mr. Trump about operations against Russia for concern over his reaction — and the possibility that he might countermand it or discuss it with foreign officials, as he did in 2017 when he mentioned a sensitive operation in Syria to the Russian foreign minister.

“Because the new law defines the actions in cyberspace as akin to traditional military activity on the ground, in the air or at sea, no such briefing would be necessary, they added.”

In an article titled “Pentagon Keeps Trump in the Dark About its Cyber Attacks on Russia“, Rolling Stone‘s Peter Wade described this jarring revelation as follows:

“New laws, enacted by Congress last year, allow such ‘clandestine military activity’ in cyberspace to go ahead without the president’s approval. So, in this case, those new laws are protecting American interests… by keeping the sitting president out of the loop. What a (scary) time to be alive.”

Pentagon Keeps Trump in the Dark About its Cyber Attacks on Russia https://t.co/CJLFjbkR6x pic.twitter.com/TFYkTAcD0g

So Trump is in a bit of a bind now. The escalation has already been put in place, which will likely see an equal response from Moscow if it isn’t scaled back. But scaling it back would mean a whole new wave of shrieking alarmism from the political/media class about the conspiracy theory that just won’t die no matter how much evidence is mounted against it: that Trump is a controlled puppet of the Kremlin. All as he’s working to build the case for re-election in 2020.

Stephen F Cohen, professor emeritus of Russian studies at New York University and Princeton University and one of America’s leading experts on US-Russia relations, has been warning for years that exactly this would happen. In an April 2017 interview on Democracy Now, Cohen warned that placing political pressure on a US president to never step back from escalations during a showdown between nuclear superpowers could have potentially world-ending consequences should mounting tensions see a situation similar to the Cuban missile crisis again.

“I think this is the most dangerous moment in American-Russian relations, at least since the Cuban missile crisis,” Cohen said. “And arguably, it’s more dangerous, because it’s more complex. Therefore, we—and then, meanwhile, we have in Washington these—and, in my judgment, factless accusations that Trump has somehow been compromised by the Kremlin. So, at this worst moment in American-Russian relations, we have an American president who’s being politically crippled by the worst imaginable—it’s unprecedented. Let’s stop and think. No American president has ever been accused, essentially, of treason. This is what we’re talking about here, or that his associates have committed treason.”

“Imagine, for example, John Kennedy during the Cuban missile crisis,” Cohen said. “Imagine if Kennedy had been accused of being a secret Soviet Kremlin agent. He would have been crippled. And the only way he could have proved he wasn’t was to have launched a war against the Soviet Union. And at that time, the option was nuclear war.”

People rarely take time to deeply reflect on the uniquely important fact that our species came within a hair’s breadth of total annihilation during the Cuban missile crisis. We learned long after it was all over that the only reason a nuclear-armed Soviet submarine didn’t discharge its payload on the US Navy and set off a full-scale nuclear exchange between the US and the USSR was because one of the three men in the sub needed to authorize the weapon’s use stood against the other two and refused. That man’s name was Vasili Arkhipov, and he’s responsible for the fact that you and everyone you love exists today. There’s a good PBS documentary about the event on YouTube if you’re curious. 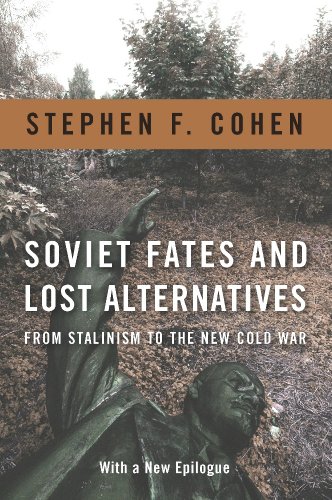 President Kennedy was constantly going back and forth in communication with the Soviets during the Cuban missile crisis, and any number of things could have gone cataclysmically wrong during that exchange had Kennedy not made certain concessions at certain times and known when to hold back instead of pressing forward. He made a series of diplomatic moves that would not be possible in this current paranoid, leak-prone climate, including secretly recalling the USA’s Jupiter missiles from their position in Turkey at Khrushchev’s request.

For all the outrage that liberals display whenever a high-profile Republican utters the phrase “deep state”, it sure is interesting that the Commander-in-Chief has found himself in a situation where he is at the whim of a collective of warmongers who are advancing pre-existing agendas against a nation they perceive as a geostrategic threat to US hegemony. It begs the question, who is really in charge?

The US war machine is the most powerful military force in the history of civilization, and the alliance of nations that it upholds is functionally the most powerful empire that the world has ever seen. Because so much power depends on the behavior of this gargantuan war engine, it is seen by those with real power as too important to be left to the will of the electorate, and too important to be left to the will of the elected Commander-in-Chief. This is why Americans are the most propagandized people in the world, this is why Russia hysteria has been blasted into their psyches for three years, and this is why we are all at an ever-increasing risk of dying in a nuclear holocaust.

UPDATE: Trump now seems like he might be denying that what The New York Times’ sources said is happening is happening. It’s unlikely that the Times would fabricate a story whole cloth, so if Trump is in fact denying the story then either the sources are lying about what they’re doing in their own purported jobs, or Trump is still being kept in the dark, or Trump is just lying.

“Do you believe that the Failing New York Times just did a story stating that the United States is substantially increasing Cyber Attacks on Russia,” Trump tweeted. “This is a virtual act of Treason by a once great paper so desperate for a story, any story, even if bad for our Country. ALSO, NOT TRUE! Anything goes with our Corrupt News Media today. They will do, or say, whatever it takes, with not even the slightest thought of consequence! These are true cowards and without doubt, THE ENEMY OF THE PEOPLE!”

Do you believe that the Failing New York Times just did a story stating that the United States is substantially increasing Cyber Attacks on Russia. This is a virtual act of Treason by a once great paper so desperate for a story, any story, even if bad for our Country…..

Classic Cars and Classic DriversThe Stories Are Beginning To Exceed