Is this another story that will be heavily censored, and possibly even branded as fake news? It’s not unlikely, and it’s quite reminiscent of George Orwell’s 1984, a classic book depicting a populace ruled by a political regime that persecutes individualism and independent critical thinking as “thoughtcrimes” that must be enforced by the “thought police.” Today, the thought police are the global elite, who are using social media platforms like Facebook to censor information, no matter how well presented, sourced and truthful the information is. This is because information, in several different areas, is threatening multiple corporate, political and elitist interests.

So, who are these fact checkers? Well, NewsGuard is one of them, which is funded by Clinton donors as well as big pharma and the Council on Foreign Relations. These organizations are also heavily tied to mainstream media outlets like The New York Times. Mainstream media outlets are owned by a small group of powerful people. These groups also have very close ties to multiple corporations and intelligence agencies like the CIA. Although these days it doesn’t seem very hard to recognize this, mainstream media is still used to sway the minds of the masses on certain topics by ridiculing them and failing to address and counter the points made by others. The latest example of this is with regards to 5G.

The 5G wireless technology rollout has been happening for a long time. We’ve seen a lot of marketing and information detailing how this type of technology will make our lives better and speed up the process of anything wireless. President Donald Trump recently described the 5G rollout as a “race” that “America must win.” The Canadian Prime Minister has also been quite outspoken about 5G, but has completely ignored anything regarding the health consequences, like most politicians have done so far. 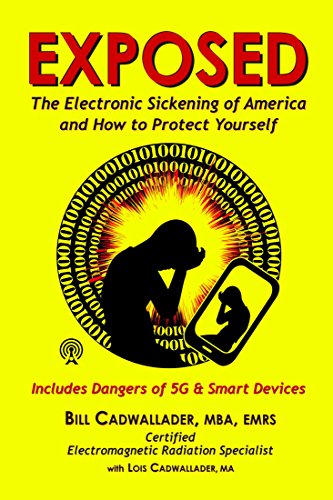 A recent article in The New York Times, a major mouthpiece for the establishment, is a fiction piece on the topic of 5G masquerading as news. The piece was written by William Broad titled, “Your 5G Phone Won’t Hurt You But Russia Wants You To Think Otherwise.” The paper claims that the health risks associated with 5G technology are a crazy “conspiracy theory” without even acknowledging all of the concerns being brought up by hundreds of scientists and doctors, not to mention all the peer-reviewed research and the considerable number of papers that have been published on the subject over the years. If 5G technology is so safe, why don’t we simply put it through appropriate safety testing to ease everyone’s minds? The answer is simple: It’s an obvious threat to human health, and if the corporations who control this technology, which unfortunately seem to control our government health regulatory agencies, actually did put it through transparent safety testing, there is no way these technologies would be allowed to come out. It’s truly a crime against humanity.

Furthermore, it’s quite comical how the essay blames Russia. Too long has Russia been used as a tool to simply cast blame on, the latest example would be hacking the 2016 US presidential election. There was no evidence for that, and it seems to be a narrative that was made up out of thin air by the elite, using mainstream media as their tool.

“As a patriotic loyalist of Russo-paranoia, Broad has dreamed up a hallucination that Russia is preparing to outpace the US’s strategy to dominate the global “internet of everything” in the race to launch 5G technology globally. Aside from Broad’s otherwise corporate friendly stances supporting hydrofracking, genetically modified foods, and the myth that vaccines do not contribute to neurological disorders, he has produced some excellent work about Yoga culture and North Korea. Yet these are hardly topics that would enable a person to speak intelligently about electromagnetic frequency’s (EMFs) biomolecular effects on living organisms.”  – Richard Gate, Executive Producer of the Progressive Radio Network and a former Senior Research Analyst in the biotechnology and genomic industries, & Dr. Gary Null, the host of the nation’s longest running public radio program on alternative and nutritional health and a multi-award-winning documentary film director including Poverty Inc and Deadly Deception (source)

A Belgian government minister recently announced that Brussels is halting its 5G plans due to health concerns.

The statement was made by Céline Fremault, the Minister of the Government of the Brussels-Capital Region, responsible for Housing, Quality of Life, Environment and Energy. From an interview last Friday, with L’Echo:

“I cannot welcome such technology if the radiation standards, which must protect the citizen, are not respected, 5G or not. The people of Brussels are not guinea pigs whose health I can sell at a profit. We cannot leave anything to doubt.”

There are more than 10,000 peer-reviewed studies that confirm 5G’s measurable adverse effects on human biology. Again, the Times completely ignored this and simply implied that these health concerns are a conspiracy theory. Meanwhile, as far back as 2011, the International Agency for Research on Cancer (IARC)  classified EMFs as possibly carcinogenic to humans. This was based on research showing a direct correlation between glioma tumors — a malignant brain cancer — and wireless mobile phone use. The Agency falls under the umbrella of the WHO, a cesspool compromised of corporate conflicts of interests and biased influence. It’s important to mention that the former chair of the IARC group, Anders Ahlbom, who’s also the co-founder of Gunnar Ahlbom AB, a Belgian lobbying firm providing public relations services to the telecom industry, was responsible for evaluating the epidemiology and carcinogenicity of mobile phone radiation. The IARC is completely biased, yet it still admits that 5G is “possibly” carcinogenic, even though the science shows that it clearly is carcinogenic.

Between August 2016 and September 2018, over 400 new studies on electromagnetic radiation risks were compiled by public health professor Joel Moskowitz at the University of California at Berkeley. These studies cover earlier generation technologies, whereas 5G will be everywhere and far less safe. Compared to 4G technology, which is commonly used today, every 5G base station will contain hundreds of thousands of antennas, each aiming lasers like microwave beams to all devices. In an urban area, base stations could be installed as little as 100 meters (328 feet) apart.

Those studies show a myriad of risks, including damage to DNA, damage to sperm, neuropsychiatric damage, and much more. For example, a study titled “Microwave frequency electromagnetic fields (EMFs) produce widespread neuropsychiatric effects including depression” published in the Journal of Chemical Neuroanatomy outlines this quite clearly, and it’s only one of thousands of peer-reviewed studies raising multiple concerns in regards to this type of technology.

Dr. Martin L. Pall, PhD and Professor Emeritus of Biochemistry and Basic Medical Sciences at Washington State University, is another academic who has gathered a number of studies and compiled them together. Taken from his report titled “5G: Great risk for EU, U.S. and International Health! Compelling Evidence for Eight Distinct Types of Great Harm Caused by Electromagnetic Field(EMF) Exposures and the Mechanism that Causes Them,” he states that:

“Putting in tens of millions of 5G antennae without a single biological test of safety has got to be about the stupidest idea anyone has had in the history of the world.”

According to Dr. Marin Blank from Columbia University’s Department of Physiology and Cellular Biophysics,  with regards to wireless radiation in general:

“We have created something that is harming us, and it is getting out of control. Before Edison’s light bulb there was very little electromagnetic radiation in our environment. The levels today are very many times higher than natural background levels, and are growing rapidly because of all the new devices that emit this radiation. Putting it bluntly they are damaging the living cells in our bodies and killing many of us prematurely.”

If you want to dive deeper into the science of this stuff and see just how obvious it is, you can find a lot of research that’s been published over the years linked at the Environmental Health Trust. It’s a great resource.

Furthermore, we’ve covered this topic in depth, and you can read some of our other related articles if you’re interested. They’re listed below:

Superbugs and the Ultimate Economic Weapon: FoodTake the Quiz That Reveals Your Best Learning Style