The tweet below isn’t comprised of intelligent thought, and it’s not bargaining bluster, either. It’s the ravings of a megalomaniac who has gone off his rocker:

I think that China felt they were being beaten so badly in the recent negotiation that they may as well wait around for the next election, 2020, to see if they could get lucky & have a Democrat win – in which case they would continue to rip-off the USA for $500 Billion a year….

….The only problem is that they know I am going to win (best economy & employment numbers in U.S. history, & much more), and the deal will become far worse for them if it has to be negotiated in my second term. Would be wise for them to act now, but love collecting BIG TARIFFS!

There is scarcely a word in that blizzard of glandularization that points to anything that can be described as rational or “constructive” or that comports with any other part of the hopium vocabulary that has euthanized Wall Street.

But it does give you all the warning you could possibly require. That’s because whether he appreciates it or not, Trump’s increasingly unhinged tweet storms on the trade file and most else are rapidly earning him the moniker of DEFCON Donald.

What we mean is that the Donald is home alone in the Oval Office with no one to restrain his abysmally bad instincts on trade and economic policy – nor to filter the incoming data and real world conditions through a lens other than that of his overweening ego and self-absorbed delusion that it’s all about him.

That is, Mnuchin is an 80-pound weakling who gives “yes men” a bad name; Kudlow has been snorting bullish ethers down on Wall Street for so long he ceased being an “economist” decades ago; Peter Navarro is a deranged Sinophobe who is actually rooting for war with China; Wilbur Ross may or may not still have a pulse and has trade views only slightly less primitive than the Donald’s rank mercantilism; and the whole show is in the hands of a hard-core beltway protectionist, Robert Lighthizer, who has spent 40-years in the Imperial City helping to put girth on Leviathan as, how and whenever possible.

If you like understatement, therefore, you could call that a perfect storm. Over the course of decades during which it has been utterly derelict in its constitutional duties, Congress had delegated open-ended powers to the President to attack American capitalism in the name of fair trade and national security under the 1974 and 1962 trade acts, respectively.

The only fig leaf of defense for this abdication was that no one on Capitol Hill – not even the hard-core union Dems or the textile and steel Republicans – ever imagined that an outright mercantilist moron would end up in the Oval Office. And then reside there home alone with his twitter account unchained, at that.

It’s hard to think of a more fraught scenario. Yet it was always implicit from the beginning of the Great Disrupter’s tenure in the White House.

That is, the Donald freakish ascent to the presidency was fueled by raw voter protest against 30 years of failed monetary and fiscal policy in which debt and speculation have supplanted free market efficiency, growth and real wealth gains; and in which earned differences in wealth among households have been supplanted by the capricious windfalls of speculation and rent-seeking.

To be sure, disaffected voters in rust belt precincts who made the difference in the electoral college had not been reading their Hayek or Mises. But they knew their jobs, real wages and living standards were under relentless assault because whatever Washington was doing in behalf of the bicoastal elites and Billionaires Club was not trickling down to Racine or Youngtown.

By the same token, this human vessel for protest energies and grievances was an utterly empty vessel when it came to policy. The Donald never had a plan that was remotely capable of MAGA; he was actually a walking cache of economic crack-pottery with respect to trade, fiscal policy and central banking.

All of that was plain as day on November 8, 2016 but by then the Fed had unleashed a momentum driven wave of financial speculation and leverage-based asset inflation that was virtually irrepressible. So the casino had no capacity to even remotely recognize the threat posed by the most bombastic, information free, bile-ridden windbag ever to rise to the top of the American political system.

Not surprisingly and unfortunately, with the mechanisms of honest price discovery all destroyed or badly impaired, we got the biggest sucker’s rally in recorded history or even prehistory. Pricing-in a “trade deal” with the Red Ponzi was but the final stroke: The stock market has actually been charging toward the cliff ever since the wee hours of election night when the proverbial smart money called in the sheep for the final slaughter.

As of the Donald’s Sunday tweets, however, which dramatically blew-up a trade deal with the Red Ponzi that was never in the cards anyway, the slaughterhouse has been reopened for the third time this century.

So blood is flowing just like at the onset of the two crashes that have gone before. Not only do we have a triple top, but it has occurred in an environment in which the Wall Street chart monkeys have been hung out to dry, meaning that the casino is now flying blind.

After all, the Donald has launched a $140 billion unguided missile (25% tariff on $563 billion of Chinese imports) at the domestic economy. But it will slam the entire the China based global supply chain and world trading system which delivers $2.7 trillion of goods to US ports annually.

Yet even that humungous figure is only the visible part of the story. It reflects mainly finished merchandise which flows from a much larger pipeline of processing, production and distribution wherein goods gets handled and processed in multiple stages before they finally arrives on these shores.

What that means is that we are in utterly uncharted waters. Forget Smoot-Hawley redux. That happened in ancient times (1930) when the US was still a large international creditor and exporter.

By contrast, there have never been technologically enabled, just-in-time global supply chains like the infinitely complex production and trading arrangements of today. That means there are no models to track the cascading effects because no one has ever bothered to even contemplate something as whacky as what the Donald has now unleashed upon the world.

Indeed, he seems to think he is negotiating with the pipefitters union and the New York City Department of City Planning, and has the upper hand because he’s backstopped by a booming stock market and “the best economy & employment numbers in US history” .

Nothing could be more delusional. The stock market is an epic bubble now visibly cracking and the US economy is limping into cyclical old age just as the Donald’s Trade Wars and massive Fiscal Debauch are about to hit it with malice aforethought.

Moreover, the central banks do not have the slightest idea of how to counter the effects of the economic mayhem coming down the pike.

That’s because as we will treat with in Part 2, the consequences of the Donald’s $140 billion tariff (and multi-trillion Federal borrowing binge on top) all depends on price elasticities and second and third order effects that are impossible to anticipate. In turn, that means the Eccles Building has no clue at this moment whether it is facing a wave of inflation that implies a policy of tightening or hits to production and deflationary dynamics which militate toward stimulus.

In the real world, it is likely to be a complex mix of both – a condition that will finally expose our Keynesian central bankers for the mountebanks they actually are. The fact is, the Donald is single-handedly pushing the global economy into a stagflationary trap – one which debt-ridden economies have no capacity to absorb and central banks have no tools to ameliorate.

To be sure, reality and Wall Street’s bullish narrative have been completely decoupled for years. But that has been especially so since a flukish turn of 90k votes in three states – Michigan, Pennsylvania and Wisconsin – out of 136.5 million caste threw 46 electoral votes and the election to Donald Trump .

And that’s what Wall Street still doesn’t get. The Donald is destined to paralyze the state for the first time since monetary central planning was launched in October 1987, but there is not the slightest recognition that both the fiscal authorities and the central bank are out of dry powder.

Moreover, the comforting view being bandied about Wall Street that when push-comes-to-shove the Donald will back off and either compromise or capitulate couldn’t be more misleading.

What is now in play is not a matter of what Trump calculates he needs to win the election – as if he is some kind of savvy latter day Lyndon Johnson. What’s in play is the fact the he does not know the point of no return in the Trade War with the Red Ponzi – nor does he have a clue about how rapidly the unraveling could accelerate.

But this tweet from Beijing’s favorite mouthpiece, Hu Xijin, gives a foretaste of how quickly this could unravel:

China may stop purchasing US agricultural products and energy, reduce Boeing orders and restrict US service trade with China. Many Chinese scholars are discussing the possibility of dumping US Treasuries and how to do it specifically.

Indeed, the fact that the talking heads are giving him credit for having a strategy and even a semi-coherent game plan is merely testimony to the fact that the casino is still besotted with insouciance on steroids. In truth, however, the Donald has no clue about what comes next – he’s literally making it up by the hour and the tweet.

In a post this morning, Bloomberg’s Richard Breslow got it right. Wall Street still thinks there is a fire brigade around to perform a bailout of last resort if the Donald’s Trade War actually goes awry.

Not so. Not even close.

Today is worse. We should know better, but there has been a full capitulation to the belief that governments will be able to indefinitely clean up their messes with a quickie liquidity injection. It isn’t even controversial anymore. Apply this lotion as needed.

And we continue to not wonder why there is so much talk about even more extreme ways to implement monetary policy… as needed!

So, here were are on the south side of a triple top. And the only way back depends upon an outbreak of calm, rationality and constancy on the part of the Donald.

For anyone left in the casino counting on that, good luck to you!

But wait until the Donald gets the bad numbers that are implicit in his talking points boom. Then he will really go over the bend.

The fact is, real final sales to domestic purchasers tell the real story of the Fake Trumpian Boom by removing the inventory and trade perturbations in the short-term GDP numbers. During the first nine quarters on the Donald’s watch, the average growth rate has been 2.55%.

So what is happening is that the cycle is running out of steam – just as the Donald’s insane Trade War is fixing to body-slam what remains. Peak Trump has surely arrived. 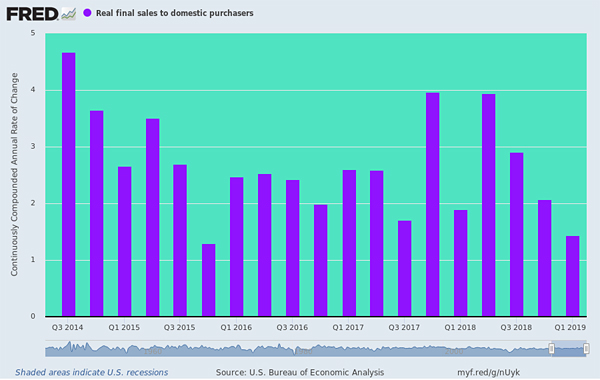