Theresa May Doesn't Have the Votes: Who will Bend? EU, Tories, Labour or May?

Extend and PretendEurointelligence says You Really Should Not Take EU’s Willingness to Extend for Granted.

One of the dangers of the Brexit debate is that everybody is making hidden assumptions about what others will do. One of these assumptions is that the EU would only be too happy to extend the Brexit deadline. The EU would, of course, extend to give time for ratification of a deal or even to make way for a cross-party deal. But Theresa May would have to make clear pretty quickly that this is what she wants to do after the meaningful vote goes against her for a second time – which may well happen. However, the idea that the EU is willing to accept a long extension, or a semi-permanent one, is fanciful for a number of reasons. The most important relates to power politics within the EU. The EPP has to be mindful of the impact a long delay would have on the balance of power, especially if it were to expel Viktor Orban. If the UK were forced to hold European elections in May it would not send a single delegate to the EPP, which means that the EPP’s relative position in the parliament would weaken further. A long delay would almost certain lead to an outcry among Brexit supporters, and could trigger a groundswell of support for Nigel Farage’s new Brexit party.

It appears to us that opposition to May’s deal among pro-Brexit MPs is hardening again – partly based on those delusions.

If the meaningful vote is negative – as it may well be – we assume that May would at this point try to reach a cross-party agreement to open up the discussion on the future relationship, by giving the House of Commons the right to pass instructions to the government for the post-Brexit negotiations. At that point, a soft-Brexit majority would almost certainly assert itself.

In Brussels, meanwhile, the UK-EU talks are becoming more concrete. Tony Connelly writes in RTE that the two sides were working on three separate strands: one on the guarantee of the backstop’s temporary nature; a second on the technological solutions that might replace the backstop; and a third on how to change the political declaration. Negotiations are now in the hot phase – with an agreement due probably on Monday. We doubt that the two sides would want to give the British press much time to take this deal apart.

Eurointelligence assumes a soft-Brexit majority would almost certainly assert itself. But I am not certain what they means by a soft Brexit.

Regardless, unless there is some sort of binding guarantee by the EU as a backstop replacement, one can hardly be certain of anything.

Deal or No Deal?​ 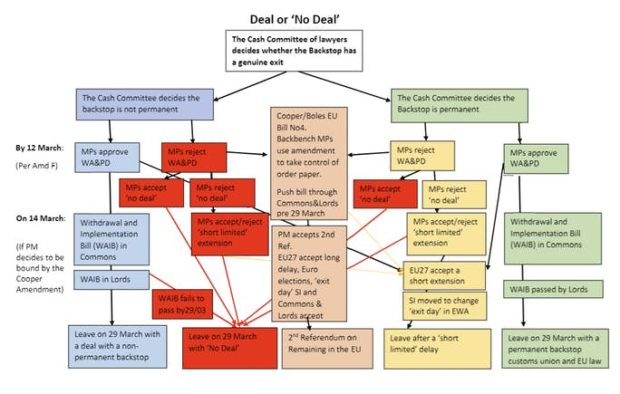 Christopher Howarth, a senior research analyst for the House of Commons, says Deal or No deal, Brexit Cannot be Stopped.

Howarth concludes “If the Government brings back the same deal without an exit to the backstop, it will be defeated. If it is defeated, there will be no second referendum or prolonged stay in the EU. The UK will leave. In short, don’t panic: if MPs hold their nerve, we are leaving the EU on 29th March without a permanent backstop.”

In short, Howarth either believes the EU will budge or there will be a no-deal Brexit.

I am not as confident as Howarth but I believe his take is more likely than that of Eurointelligence.

The Guardian did the math as it stands today [March 5 as reported by Eurointelligence] : May needs an additional 110 votes to get the deal through – from a pool of 115 Tory MPs and 40 Labour MPs in leave-voting seats. There are 7 pro-Remain Tory MPs who said they will vote against the deal without a referendum. This leaves a total of 148 MPs. If 10-20 Tory Brexiteers reject the deal, she will need to pick up some 20-30 or so Labour MPs to get it through. And it seems that the best way to get those Labour MPs lined up would be an open vote on the future relationship, including the option a customs union. There is no chance of the UK parliament aligning behind any option for so long as Brexit itself has not happened. But, once it has, the probability of agreement is large simply because the more extreme Brexit options – leave without a deal or re-run the referendum – will have been eliminated. This is why a two-stage ratification is much more likely to succeed than a once-and-for-all vote.

The Eurointelligence position seems more than a bit convoluted.

Supposedly, once Brexit happens, leave without a deal will be off the table.

Prime Minister Theresa May’s chief whip told the Cabinet on Tuesday he’s not confident he has the numbers to get her exit accord approved next week, and predicted that a defeat would be followed by Parliament forcing the U.K. to maintain closer ties with the European Union.

Julian Smith, the man with the impossible job of manufacturing majorities for May’s Brexit policy, told ministers that the vote will be tight and he doesn’t know which way it’s going to go, Bloomberg reported on Tuesday.

Meanwhile, the signals from the Labour camp don’t look good for May. Labour officials are sounding increasingly upbeat that they will be able to contain the potential voting rebellion in their ranks. Speaking privately, three officials said they’re confident fewer than 10 Labour lawmakers would vote with May, even though whips have as many as 30 members of Parliament on their list of potential rebels. The less likely the deal is to pass, the less inclined wavering lawmakers might be to risk their careers to back it.

May’s latest efforts to get Labour MPs on board are falling flat. Cash handouts for pro-Brexit regions were widely criticized earlier this week and the government’s long-awaited announcement on protecting workers’ rights after Brexit — also aimed at giving Labour MPs an excuse to back the agreement — have been slammed as insufficient.

The first two Bloomberg paragraphs above sound like hogwash and fearmongering by Theresa May.

The second two paragraphs are more realistic. Unless the EU agrees to modify the backstop in a meaningful way the vote will go down.

If it’s close, then expect May to keep submitting it to vote. That’s way I don’t have overriding confidence in the opinion of Howarth.

If a vote fails a second time May will put forth an amendment to take no-deal off the Table.

That’s why I have no confidence in the opinion of Eurointelligence.

Curiously, Eurointelligence says don’t take for granted the EU will extend, yet it fully expects an extension.

I expect one too, but lasting no longer than June. Otherwise, the UK will be represented in the EU parliament and will make a mess of things.

I keep returning to the Malthouse Compromise. It is the one solution that seems to be a reasonable alternative for everyone but the hard remainers.

Under the Malthouse Compromise, Brexit happens and the backstop stays in place for a maximum of two years. Then and only then is there a hard Brexit, assuming the UK and EU cannot come up with a backstop replacement.

The EU labels this a unicorn. If the Brexiteers repeatedly hold their ground, I expect something like the Malthouse compromise to win.

Theresa May may resign first, or not. But if so, Tories are back in the lead in polls, and there is the possibility they can pick a suitable candidate that could get a majority right now.