Apple has always been equally an enterprise and a secular religion. The Apple Faithful do not tolerate heretics or critics, and non-believers “just don’t get it.”

So the first thing any critic must do is establish their credentials as a Believer:My first Mac model 0001 was the 21,447th made in week 32 of 1984 in Fremont, California. Now that we’ve established that, we can move on to my profound sense of anguished abandonment that Apple ceased producing the iPhone SE, the only form factor that works for me.

But Apple Faithful are accustomed to repeated bouts of anguished abandonment; it’s just one of the burdens the faithful must bear.

Focusing on the enterprise rather than the religion, Apple’s core–its revenue and profit potential–is rotten. As the charts below illustrate, despite all the happy talk about growing “services,” the hardware-software iPhone generates nearly 60% of Apple’s revenues. The iPhone ecosystem is also the foundation of the “services” currently being hyped as replacement sources of revenue.

The problem is that the proprietary features of the iPhone that have generated strong demand as prices kept rising are reaching diminishing returns. People want the status of owning an iPhone, but there are limits on what the bottom 90% can pay for that status.

The new features of the $1,000 iPhones have also reached diminishing returns. This is analogous with adding memory to a computer or increasing the pixel count in a digital camera: at some point, the added feature no longer has any impact on the user experience.

As the second chart illustrates, the market for costly mobile phones is saturated: everyone on the planet who could afford one and wants one has already bought one. As we all know, the “fix” for saturation is to speed up the product cycle so the existing owners are forced to buy a newer and much more costly model every year or two.

But this strategy also has diminishing returns: people get tired of getting ripped off by accelerating replacement cycles and eventually some percentage step off the merry-go-round and switch to a much cheaper and less demanding (product-cycle-wise) alternative. 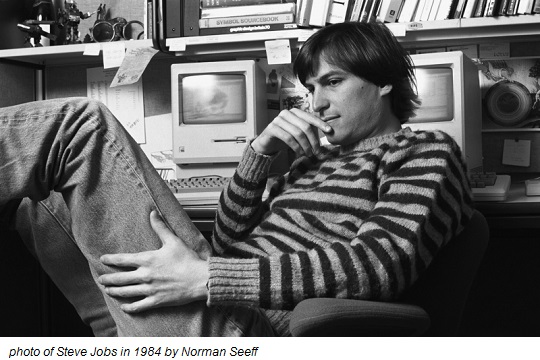 Then there’s the other problem: without Steve Jobs, there is no “next big thing” at Apple. As I’ve explained many times here and in my books, value flows to scarcity, and Apple’s enormous profits are based on the artificial scarcity Apple has been able to impose on the market by closely guarding its proprietary mix of hardware and software.

But as this chart attempts to explain, the price innovators can charge as competition increases diminishes as the innovations lose their scarcity value. The faster the advances and product cycles, the faster the erosion of pricing power.

Why the Innovation Premium Is Diminishing (January 16,2013) 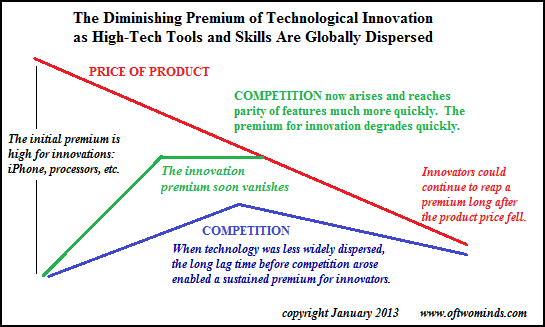 The innovations of late-cycle iPhones are out of synch with the price increases.Apple is moving from selling innovations worth an extra couple hundred dollars to resting on its status-symbol laurels as a “luxury brand.”

That may work well in a global expansion, i.e. the past 10 years, but as the world economy contracts (don’t dare call it recession), that strategy will not yield the same results it did in the expansionary cycle.

Previous article by Charles Hugh Smith: When Are We Going to Tackle the For-Profit Monopolies