Here's Another Wakefield Myth You Can Stop Repeating

As the US Senate holds entirely one-sided hearings on the topic of vaccines, with the likely goal of imposing vaccine mandates nationwide, we’re hearing it again: The claim that we are now experiencing dangerous outbreaks of a disease that had already been eradicated (they aren’t, and it hadn’t), and that it’s all the fault of Dr. Andrew Wakefield and his “discredited” Lancet paper.

According to this narrative, after the publication of the Lancet paper, (which identified a possible association between the MMR vaccine and autism, and called for further investigation), parents panicked, stopped giving their children the MMR vaccine, and measles cases skyrocketed.

“But following the popularization of Andrew Wakefield’s 1998 fraudulent study, linking the MMR (measles, mumps, rubella) vaccine to autism in children, followed by celebrity endorsement of vaccines linked to autism, vaccination rates declined over the past decade, leading to larger and larger outbreaks of vaccine-preventable diseases, many of which carry life-threatening and/or organ-threatening complications.”

And here is Time Magazine:

“In the U.S., measles was declared eliminated in 2000. Since 2000, however, there has been a resurgence of measles, with more than 2,216 reported cases. Wakefield’s anti-vaccine fanaticism contributed to the 2015 outbreak in Disneyland in California, which eventually infected more than 130 people, and to the 2017 measles outbreaks in Minnesota, where his message persuaded many parents not to vaccinate their children.”

It’s a thrilling narrative for those who seek to force vaccines on the people around them. The only problem is that it’s not true.

MMR vaccination rates in the US did drop slightly in 1997 – the year before the Wakefield study was published – and again in 1998. However they rose again the following year, and have remained at or above pre-1997 rates since then. In fact, the four years immediately following the Lancet study saw higher MMR vaccination rates than in the four years preceding the study. 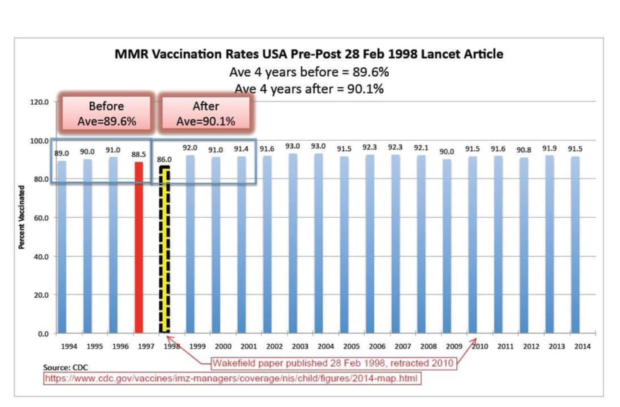 It is true that cases of measles in the US have risen in recent years: 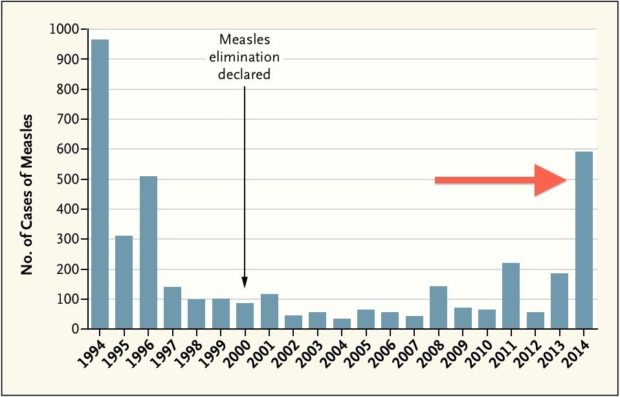 Following the spike in 2014, the numbers fell to 188 the next year, and 86 (the same number of cases in the year measles was declared to be “eliminated”) in 2016. In 2018, the number of cases nationwide was 372. But whatever increases there have been since 2000 cannot be attributed to a drop in MMR vaccination rates following publication of the Lancet paper, because there was none.

So why the confusion? Why does the media continually report that vaccination rates are declining, leading to serious outbreaks of diseases like measles? 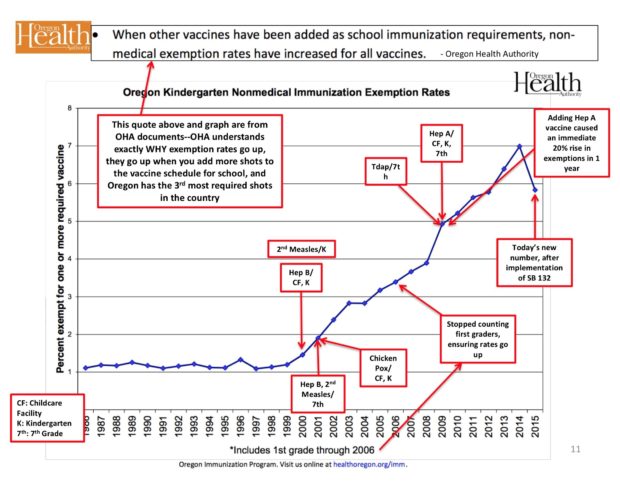 I’m going to repeat what I’ve said above, because some people don’t hear this well:

The narrative that is fueling the current hysteria around measles, and that is driving calls for mandatory vaccination across the country, is founded on a collection of falsehoods. A reasonable person might ask: How is it that nearly every single reporter and commentator in the mainstream media has gotten this so badly wrong? How is it that no-one at any of the biggest and most widely respected publications ever bothered to check their facts on this, or on numerous other issues related to the vaccine controversy? How is it that what is essentially a slanderous lie gets repeated over and over again in prominent media outlets as if it is the truth?

How To Earn an IncomeIs Socialism the Future of America?