The first thing we do, let’s kill all the lawyers
–        Dick the Butcher; Henry VI, William Shakespeare

On Law and Power, Johannes Althusius

This short book covers aspects of Althusius’ work specific to the title.  There is nothing of substance in the book about the inherent subsidiarity and voluntary governance relationships that is found in Althusius’ political construction, but this is not the purpose of the book.  I will dive into this book in a subsequent post; I couldn’t get past one point in a footnote in the introduction, written by Stephen J. Grabill.

The footnote is a quote from legal historian Harold Berman regarding the dramatic change in the role of the jurist during the sixteenth century; forgive the length: 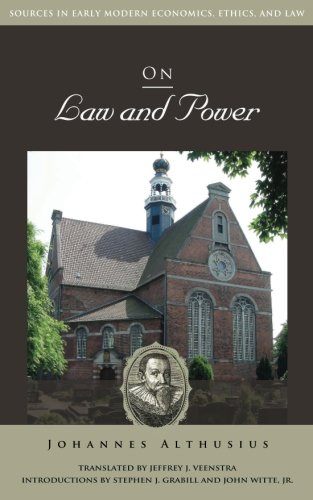 “Together with these rather obvious links between the new legal science and the new political order in Protestant principalities, there existed a more subtle link: the exaltation of the political role of the legal scholar.  In pre-Reformation Europe as well, legal scholars had played an important role as advisors to popes, emperors, and kings.  They also had sometimes been asked by the judges to decide cases.  Never before, however, had legal scholars been recruited as councilors and judges so systematically and on such a large scale as in the sixteenth-century German Protestant principalities.  This was due in part, of course, to purely political factors; but it was also due in part to the character of the new legal science, which was so intellectually complex and intricate as to require professional expertise to articulate and elucidate it.”

The loss of a common moral arbiter required the drive for legal complexities and intricacies. Without a common cultural tradition, something else must provide governance.  Governance was to be found in the work of legal scholars.

The Legacy Of The Protestant Reformation In Modern Law, John Witte, Jr.  Witte writes of the legal ramifications of the Reformation.  As usual, my intent is not to get into the theology of the topic, but the effect on the decentralized governance of pre-Reformation Europe:

This revolutionary call toppled many traditional church structures and practices in Germany after 1517. The Mediaeval canon law books were burned. Church courts were closed.

What does Witte see as a result of this toppling?

New Lutheran churches, clerics and congregants were treating their new freedom as licence for all manner of spiritual experimentation and laxness. Widespread confusion reigned over preaching, prayers, sacraments, funerals, holidays and pastoral duties.

There was no common moral authority, and there was nothing yet in place to replace this authority.

Something had to replace these.  Without a commonly accepted moral arbiter, each principality had to make it up as they went along.  This necessitated legal scholars – many legal scholars.

Lutheran jurists, in turn, joined the theologians in crafting hundreds of ambitious new reformation ordinances for the German cities and territories. By 1570, every major Lutheran land had comprehensive new state laws in place, governing public and private matters spiritual and temporal life alike.

In this order, there was no room for traditional, decentralized governance institutions:

For Luther, families, churches and states were the three natural orders or estates of the earthly kingdom, but only the state has formal legal authority, the power to pass laws.

The magistrate must not only pass laws on the basis of God’s natural law, he continued, but also exercise God’s judgment and wrath against human sin and crime.

Luther based this on the common – albeit faulty – interpretation of Romans 13.  Human (non-violent) sin was now in the jurisdiction of the magistrate, not the Church.

The state depended on the church for prophetic direction but it took over all legal jurisdiction from the church.

These laws governed not only the secular, but also the religious; the church was not even allowed to govern itself:

…the legal legacy of the Reformation can still be seen in modern laws on the family, education, social welfare, crime, and church-state relations.

Decentralization in governance; separation of moral governance from the authority of civil governance.  There are other important factors, but these were certainly keys to a reasonably libertarian law.