The Integrity Initiative and the British Roots of the Deep State: How the Round Table Infiltrated America

Kissinger’s takeover of the State Department ushered in a new era of British occupation of American foreign policy.

By Matthew Ehret
The Duran

With the nearly weekly revelations that the British Foreign Office, MI6, and GCHQ have been behind the long standing agenda to undermine the Presidency of Donald Trump and undo the peaceful alliance between nationalist leaders in America, Russia, China and elsewhere, a new focus on the British hand in undermining the United States has become a serious thought for many citizens. In the first week of the new year, fuel was added to this fire when internal memos were leaked from the British-run Integrity Initiative featuring a startling account of the techniques deployed by the anti-Russian British operation to infiltrate American intelligence institutions, think tanks and media.

For those who may not know, The Integrity Initiative is an anti-Russian propaganda outfit funded to the tune of $140 million by the British Foreign office. The January 2019 leak, featuring documents dated to the early period of Trump’s election, demonstrate that this organization, already active across Europe promoting anti-Russian PR and smearing nationalist leaders such as Jeremy Corbyn, was intent on spreading deeply into the State Department and setting up “clusters” of anti-Trump operatives. The documents reveal high level meetings that Integrity Initiative Director Chris Donnelly had with former Trump Advisor Sebastien Gorka, McCain Foundation director Kurt Volker, Pentagon PR guru John Rendon among many others.

The exposure of the British hand behind the scenes affords us a unique glimpse into the real historical forces undermining America’s true constitutional tradition throughout the 20thcentury, as Mueller/the Five Eyes/Integrity Initiative are not new phenomena but actually follow a modus operandi set down for already more than a century. One of the biggest obstacles to seeing this modus operandi run by the British Empire is located in the belief in a mythology which has become embedded in the global psyche for over half a century and which we should do our best to free ourselves of.

Debunking the Myth of the “American Empire”

While there has been a long-standing narrative promoted for over 70 years that the British Empire disappeared after World War II having been replaced by the “American Empire”, it is the furthest thing from the truth. America, as constitutionally represented by its greatest presidents (who can unfortunately be identified by their early deaths while serving in office), were never colonialist and were always in favor of reining in British Institutions at home while fighting British colonial thinking abroad.

Franklin Roosevelt’s thirteen year-long battle with the Deep State, which he referred to as the “economic royalists who should have left America in 1776″, was defined in clear terms by his patriotic Vice-President Henry Wallace who warned of the emergence of a new Anglo-American fascism in 1944 when he said:

“Fascism in the postwar inevitably will push steadily for Anglo-Saxon imperialism and eventually for war with Russia. Already American fascists are talking and writing about this conflict and using it as an excuse for their internal hatreds and intolerances toward certain races, creeds and classes.”

The fact is that already in 1944, a policy of Anglo-Saxon imperialism had been promoted subversively by British-run think tanks known as the Round Table Movement and Fabian Society, and the seeds had already been laid for the anti-Russian cold war by those British-run American fascists. It is not a coincidence that this fascist Cold War policy was announced in a March 5, 1946 speech in Fulton, Missouri by none other than Round Table-follower Winston Churchill.

When the Round Table Movement was created with funds from the Rhodes Trust in 1902, a new plan was laid out to create a new technocratic elite to manage the re-emergence of the new British Empire and crush the emergence of American-inspired nationalism globally. This organization would be staffed by generations of Rhodes Scholars who would receive their indoctrination in Oxford before being sent back to advance a “post-nation state” agenda in their respective countries.

As this agenda largely followed the mandate set out by Cecil Rhodes in his Seventh Will who said “Why should we not form a secret society with but one object: the furtherance of the British Empire and the bringing of the whole uncivilized world under British rule, for the recovery of the United States, and for the making of the Anglo-Saxon race but one Empire?”

With the help of an anglophile, racist president in America, leading figures organizing these think tanks first advanced a program to create a “League of Nations” as the solution to the “nationalist problem” which humanity was told “caused” World War One. Nationalist forces in America rejected the idea that the constitution should be rendered obsolete and the plan for global governance failed. However that did not stop the Round Table Movement from trying again. Leading Round Table controller Lord Lothian (British Ambassador to the USA) complained of the “American problem” in 1918.

”There is a fundamentally different concept in regard to this question between Great Britain and the United States  as to the necessity of civilized control over politically backward peoples…. The inhabitants of Africa and parts of Asia have proved unable to govern themselves…. Yet America not only has no conception of this aspect of the problem but has been led to believe that the assumption of this kind of responsibility is iniquitous imperialism.

They take an attitude towards the problem of world government exactly analogous to the one they [earlier] took toward the problem of the world war. If they are slow in learning we shall be condemned to a period of strained relations between the various parts of the English-speaking world. [We must] get into the heads of Canadians and Americans that a share in the burden of world government is just as great and glorious a responsibility as participation in the war”.

A Chinese leader of the American-inspired republican revolution of 1911 named Sun Yat-sen warned of the likes of Lord Lothian and the League of Nations in 1924 when he said “The nations which are employing imperialism to conquer others and which are trying to maintain their own favored positions as sovereign lords of the whole world are advocating cosmopolitanism [aka: global governance/globalization -ed] and want the world to join them… Nationalism is that precious possession by which humanity maintains its existence. If nationalism decays, then when cosmopolitanism flourishes we will be unable to survive and will be eliminated”. 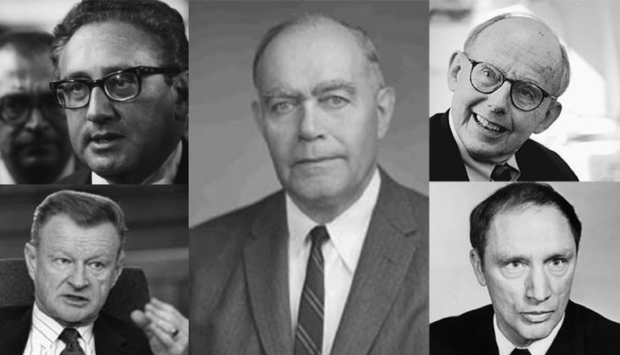 Staffed with Rhodes Scholars and Fabians, the CFR (and its International Chatham House counterparts) dubbed themselves “independent think tanks” which interfaced with Rhodes Scholars and Fabians in academia, government and the private sector alike with the mission of advancing a foreign policy agenda that was in alignment with the British Empire’s dream of an Anglo-American “special relationship”. One such Rhodes Scholar was William Yandall Elliot, who played a major role mentoring Henry Kissinger and a generation of geo-politicians from Harvard, not the least of whom include Zbigniew Brzezinski, Pierre Elliot Trudeau and Samuel (Clash of Civilizations) Huntington.

The Round Table in Canada and the Coup Against FDR

In Canada, five leading Rhodes Scholars were busy creating the League of Social Reconstruction as a self-described “Fabian Society of Canada” in 1931 which was meant to be a fascist/technocratic answer to the chaos of “greedy nationalism” that supposedly caused the economic collapse of Black Friday in 1929. During the same time in America, a different path to fascism was taken by these networks during the early 1930s. This plan involved installing a General named Smedley Butler into power as a puppet dictator steered by the Anglo-American establishment. Luckily for America and the world, General Butler blew the whistle on the coup against Franklin Roosevelt at the last minute.

Though it took a few assassinations throughout the post war years, Kissinger’s takeover of the State Department ushered in a new era of British occupation of American foreign policy, whereby the republic increasingly became the “Dumb Giant” acting as “American Brawn for the British brains” using Churchill’s words. While a nihilistic generation of youth were tuning in on LSD, and an old guard of patriots surrounding Wallace and Kennedy had fallen to the “red scare” witch hunt, geopolitical theory was fed like a sweet poison down the throat of a sleeping nation, replacing a policy of peace and “win-win cooperation” advanced by true nationalist patriots as FDR, Wallace and the Kennedys, with an imperial clone masquerading as a republic.

Sir Kissinger did nothing less than reveal his total allegiance to the British Empire on May 10, 1981 during a Chatham House conference in Britain when he described his relationship with the British Foreign office in the following terms: “The British were so matter-of-factly helpful that they became a participant in internal American deliberations, to a degree probably never practiced between sovereign nations… In my White House incarnation then, I kept the British Foreign Office better informed and more closely engaged than I did the American State Department… It was symptomatic”.

During this period, Kissinger worked closely with CIA director George Bush Senior, who was later rewarded for his role in advancing the British-planned first war on Kuwait with a knighthood. This war set the stage for the second wave of Middle East wars beginning with the Anglo-Saudi orchestrated operation known as 9/11 and the ushering in of the new “post-nation state order” by Kissinger and Blair.

This was the era which was celebrated by both Kissinger and Bush in sundry places as “the New World Order”.

It is this dystopic geopolitical order which has been challenged by the Russia-China alliance which arose in earnest with Xi Jinping’s 2013 announcement of the Belt and Road Initiative as the Grand design for large scale infrastructure projects internationally and in September 2015 with Vladimir Putin’s intervention into Syria which defeated the Hobbesian regime change paradigm which poisoned the west. In 2016, the election of nationalist American President Donald Trump opened the door for the first time in over 50 years to a true national coalition of sovereign nations to eliminate the cancer of colonial thinking forever from the earth.

It is this same British-run deep state which owns Robert Mueller, who along with the Integrity Initiative, Five Eyes and other Deep State operatives are dedicated to overthrowing President Trump from office and undoing the great potential now facing the world as outlined by the Schiller Institute and American statesman Lyndon LaRouche: 1) an FDR-style re-organization of the bankrupt banking system and 2) the unleashing of a global New Silk Road as the New Deal of the 21st Century.

Matthew J.L. Ehret is a journalist, lecturer and founder of the Canadian Patriot Review. His works have been published in Executive Intelligence Review, Global Research, Global Times, The Duran, Nexus Magazine, Los Angeles Review of Books, Veterans Today and Sott.net. Matthew has also published the book “The Time has Come for Canada to Join the New Silk Road” and three volumes of the Untold History of Canada (available on untoldhistory.canadianpatriot.org). He can be reached atmatt.ehret@tutamail.com