As Germany Goes, so Goes the Eurozone

Until recently, Germany has been the seemingly unbreakable workhorse that has pulled the European economy back from the brink and kept it ticking along through a myriad of internal and external pressures, as well as political crises, over the last decade. As the undeniable leader of the bloc, the country has spearheaded and supported rescue plans for the Eurozone’s weaker links, as well as a number of controversial policies that work towards further centralization within the EU. However, with clouds now gathering over Germany’s economic outlook, concerns over potential knock-on effects on the entire monetary union are on the rise.

Trade tensions, the threat of a hard Brexit and weaker emerging markets growth have all played a part in dampening Germany’s nine-year-long economic upswing. 2018 was a trying year for the world’s third-largest exporter, as Germany saw its much-celebrated trade surplus shrink. With imports growing faster than exports, the impact of the trade disputes between the US and both China and the European Union has been widely felt by industry leaders.

Recently released figures also cast large shadows over Germany’s formidable manufacturing sector, with industrial output much lower than expected. In November, industrial output fell by 1.9%, while the year-on-year decline was 4.7%. These figures, the worst since the end of the 2008 crisis, are understandably giving rise to fears among investors and analysts of a nearing recession.

Furthermore, the new year is unlikely to bring a reversal of fortunes for the German economy, as it is now forecast to expand at a rate below 1.5%, an estimate downwardly revised since March. At the same time, the sentiment on the ground by industry leaders and investors is shifting from caution and hesitation to outright pessimism for what lies ahead. According to a recent survey by the BVMW industry association, 53% of small and medium-sized companies in Germany believe that the country will slip into a recession in the next year.

The projected economic slowdown can have severe consequences in and of itself, however, the situation is bound to become even more dire thanks to a number of external and internal developments compounding the pressures. For one thing, as the European Central Bank (ECB) endeavors to normalize and tighten its monetary direction, the extremely accommodative environment that markets and companies have been operating under in recent years will become a distant memory.

Internal forces also help stack the odds against the German economy, with the country’s labor market being one of the key problems. The increasingly grave shortage of skilled workers that employers have been facing is presenting massive obstacles to their growth and has been detrimental to their operations. On average, it takes 100 days for a company to fill a vacancy, with the hardest hit sectors being the tech industry, construction and healthcare. As a new report by the economic research institute Prognos shows, the problem is only set to get worse. The report predicts a shortage of about 3 million skilled workers by 2030, projected to rise to 3.3 million by 2040. Germany’s demographics, specifically its low birth rates, are chiefly to be blamed for this mismatch, as the next generation of workers does not suffice to replace the working population that is now shifting to retirement. The migration wave that began in 2015, despite predictions to the contrary, has also failed to fill that gap, as integration into the labor force has largely failed and most candidates lack the language and technical skills required to fill the vacancies.

To a large extent, the labor shortages are a-self-inflicted wound for Germany, much like the problems in the long-suffering service sector. Over-regulation, extensive interventions and the inevitable inefficiencies of a centrally planned economy are creating significant hurdles that hold back growth and overall competitiveness. Overly restrictive, state-imposed requirements for access to various professions dramatically shrink the pool of eligible candidates, making it even harder for employers to fill their vacancies. On top of that, exorbitantly high employer costs for social security and other taxes, as well as harsh restrictions on employee termination conditions, place a heavy burden on companies, especially those trying to compete internationally. In other words, demographics might contribute to the present challenges, but their detrimental role is largely amplified by existing systemic inefficiencies and market restrictions.

Last but not least, it is the profile of the German economy itself that is problematic and makes it likely that the county will struggle to continue to compete in the future as is has done thus far. Despite the blue-sky rhetoric and forward-leaning proposals we regularly hear from the German government and its representatives, most ideas have not crossed over from theory into practice. The country has failed to take advantage of its booming years to improve the competitiveness of its service sector, to modernize and digitalize key aspects of its industrial sector, to press forward on tax reform or to enforce any meaningful measures to prop up its pensions that are close to breaking point. In other words, having missed the opportunity to prepare and to plan ahead while it still could, it might prove very difficult for Germany to respond to the next economic downturn lurking around the corner.

Germany’s role as the locomotive and economic leader of the entire bloc has been crucial for the last decade and the timing couldn’t have been worse for the cracks to start showing in Europe’s largest economy. The Eurozone as a whole is already facing strong headwinds, with growth estimates dropping to new lows. According to a recent survey of economists by Consensus Economics, GDP growth for 2019 is projected just below 1.6%, or 0.4% lower than the previous, more optimistic forecast in March. That would be the second consecutive annual decline, with the growth figures for 2018 expected to come in at 1.9%, far below the robust 2.4% recorded in 2017.

Peripheral pressures, both economic and political, also abound. France, once a reliable political ally to Germany and a strong economic presence in the Union, is severely weakened by domestic unrest and public loss of faith in the government, while its private sector has slipped into a contraction for the first time since 2016. Austria, also a former supporter of German initiatives in the EU has long shifted to a more critical stance, fiercely opposing migration proposals led by Germany and instead siding with Hungary, Poland, and other like-minded member-states. In the meantime, the prospect of a “no-deal” Brexit, once unthinkable for Brussels, is slowly coming into focus, as are its economic implications for the bloc. 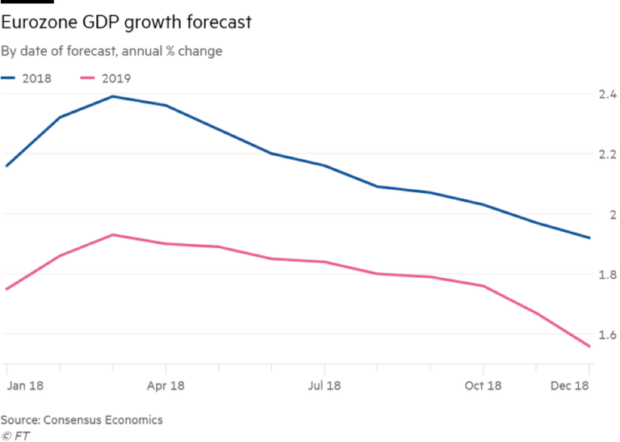 In the backdrop of the social and political tensions that have been brewing across the continent for over two years, the European Parliament elections set to take place in May this year are also giving rise to fears of a Eurosceptic “comeback”. Deep divisions and a chronic lack of open dialogue have significantly weakened social cohesion in Europe, muffling the voice of the individual and shifting power over to group structures and cultivating collective identities. Debates over vital political and economic issues have largely been reduced to simplistic, populist and crowd-pleasing grandstanding, as the public’s interest in politics and trust in politicians has plummeted. The recently erupted, “Yellow Vest” (link to previous article)inspired protests that started in France but spread throughout the continent, provide strong signs of this public discontent with the status quo.

Overall, it would appear that Germany acts as the string that keeps the bloc together and should it break, multiple challenges could surface, threatening the future of the Eurozone and the cohesion of the EU. As a result of the growing political frictions and the projected economic slowdown, the outlook for European markets and for the Euro is far from encouraging. From the point of view of an investor, the warning signs should be taken into serious consideration, as now is the time to prepare and to plan ahead. Amid uncertainty, turbulent markets and a vulnerable banking sector, physical precious metals remain the best option for those who seek to protect and preserve their wealth.

This article has been published in the Newsroom of pro aurum, the leading precious metals company in Europe with an independent subsidiary in Switzerland. All rights remain with the author and pro aurum.

Previous article by Claudio Grass: Shockwaves Felt Across the Continent

The British Roots of the Deep StateUncle Sam Wants Your DNA