Fred Dworkin vs. the Sisterhood: Defending Women Against Bat-Brained Viragos

In my capacity of shade-tree anthropologist at large, I am trying to make sense of the far Left. It is tough sledding. Most of it makes as much sense as lug nuts on a birthday cake. Help me. I am really confused.

I can’t see that the Left actually is Left, I mean. The Left in its more practical embodiments used to be the champion of the working man. It fought for unions, good pay, benefits and job security. Conditions were horrible in America’s mines and factories. Things were ugly, and Leftists often got hurt or, occasionally, killed trying to remedy them.

Today’s “Left” is the party of Bill and Hill, of George Soros and the half-educated narcissists of Hollywood rolling in dough, of excessively comfortable academics and the media, all of whom use ethnic minorities as voting fodder but want nothing to do with them. When do you think was the last time Hillary or Megyn Kelly was in a truck stop or Legion hall, or had dinner in a restaurant where most of the diners were black?

The Left is now hostile to working men, called “deplorables” in an unwise moment of honesty by Hillary. Can you imagine Saul Alinsky or Leon Trotsky worrying about transgender bathrooms or cultural appropriation? And it is a weirdly teenage Left in which most seem ten or fifteen years younger than their chronologic age. Oh good.

But now, feminists. They sound as crazy as Aunt Prudence, who thought she was a geranium, and we used to keep in the attic.

Feminists say they represent women. Oh? What possible reason do they have for thinking this delusion? They have almost nothing in common with (most) women. Almost all feminists are of the extreme Left. Few women are. Feminists seem to be predominantly lesbians. Few women are. Most women want to marry (men) and have children. Few feminists do or will. Feminists are heavily invested in identity–i.e., bloc–politics, and think women should vote the straight femme ticket. When this doesn’t happen, they babble about “traitors to their gender.” In fact, most women are independent agents who make up their own minds. Note the fifty-three percent of white women voted for Trump.

Do feminists represent anyone but themselves? What are they smoking? I want some of the seeds.

I assert that I am more of a feminist than today’s variety. Yes. You can think of me as Fred Dworkin Lite (by about three hundred pounds). Let me explain why.

A question that needs to be asked  is Do femiloons care about women at all? On the evidence, no. Consider female genital mutilation. You probably don’t want to, but just for a few seconds. In this charming ethnic custom, several women grab a terrified pubescent girl, pry her legs apart, and cut her private parts with a razor blade and no anesthetic, thus screwing up her sex life forever. The girls only occasionally die from an ensuing infection, so it doesn’t really matter. Unless, of course, you are the girl. .

Now, I grant that I am of little understanding, but the procedure looks to me like misogyny, extreme child-abuse, actionable assault and battery, and sadism.

But it doesn’t bother feminists  I, Fred Dworkin, would take a ball bat to the women, and a ball bat and tin snips to the father who allowed it. This would create jobs in the wheelchair industry, grow the economy, and make America great again. But the harridans of the Left say not a word against this grotesque and kinky horror. 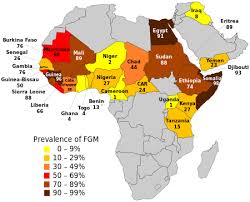 Why not? Here we come to the class system of the sinister set. Most of the people who slice their girl children are Muslim and, often, black. See map. In the weird hierarchy of today’s Leftists, blacks reign as the most sacred, trumping (forgive the expression) Muslims, who are more sacred than women, who are at the bottom in the rankings, after transgenders. No femiloon in good standing would dare criticize dark Mohammedans for torturing girl children. What kind of solidarity would that be?

Well, I, Fred Dworkin, will damned well criticize them, with a bat as noted above. So will easily ninety-five percent of white men. But not feminists, who don’t care. Neither would Ted Bundy, who liked to do that sort of thing.

Does none see an inconsistency here? Actually mutilating kids is OK.  But when Trump was accused of possibly groping women who flock around an available billionaire for the purpose of being groped, the batty spinsters of the Left went berserk. Admittedly this was a minor adjustment to their usual demeanor, but it increased their volume. Why was this?

Now, if a white man refers to a hussy as a hussy, or says that a well-endowed woman is really stacked, he will be taken under siege by battalions of squalling potty-mouthed termagants as a misogynist, and likely remanded for psychiatric counselling and probableysubjected to reeducation.

But let’s look at some rap lyrics by blacks. I’m not sure “artists” is exactly the word, but we will overlook this for now:

“BITCHES AIN’T SH*T BUT HOES AND TRICKS / LICK ON THESE NUTS AND SUCK THE D*CK.” – SNOOP DOGG

“ONCE AGAIN I GOTTA PUNCH A BITCH IN HER SH*T / I’M ICY BITCH, DON’T LOOK AT MY WRIST / BECAUSE IF YOU DO, I MIGHT BLIND YOU BITCH.” – JASPER DOLPHIN OF ODD FUTURE

How lyrical. I, Fred Dworkin, feminist of the old school, would tolerate this sort of thing for about a Silicon Valley nanosecond. After which I would apply my utility bat, both to the lower primates who grunt this soaring sludge and to the music executives who disseminate it. No  civilized society or, in our case, approximation thereof, should allow its women to be subjected to such gunch.

But feminist don’t say a word. Why?

Because out on the stranger reaches of the Left wing, where the feathers run out and giddy space begins, women rank below blacks. To  criticize a black for treating women as vilely as the human mind can conceive, as sluts, hos, and worse–why, that would be eeeeeeeeeeeeeek!–racism.  In the fever swamps of the Silly Left, women suck hind tit, as we used to say in the country.

Eons ago, when I was in high school and fragments of the first amniote egg wete still scattered about, we had a concept called “gentility.” Not everybody could spell it, but it was expressed in  two forms, called “ladies” and “gentlemen.” As country kids,, we didn’t know were doing these things, or being them. And we weren’t elaborate about it, no bowing and hand-kissing. But boys didn’t use foul language around girls, or they around us. We all knew about sex, or strongly suspected, but we just knew that girls were, well, sort of special, and there were things you didn’t do around them. It civilized us, something boys of that age greatly need.

Well, feminists weren’t having any of that. I saw a while back that some high school had a sign that said, “The more you act like a lady, the more he will behave as a gentleman.” Just so. If girls expect respect, they will get it.

But feminists honked and yowled and the sign came down. See, it was sexist. Yes. It implied that girls and boys were different. What a concept.