Lincoln As He Really Was

A review of Lincoln: As He Really Was by Charles T. Pace (Shotwell Publishing, 2018).

Abraham Lincoln was American’s Robespierre, but his crimes only reflected the character flaws he had while in office. Dr. Charles T. Pace, a medical doctor from Greenville, North Carolina, has written a masterful political biography of Lincoln. He portrays Lincoln as a “politician’s politician, a political animal, ambitious, domineering, and ruthless, with a Machiavellian love of power without principle. His biography does not, however, demonize Mr. Lincoln but affirms that he was a deeply flawed man of great rhetorical talent, a man whose character flaws led him to wage war against the Confederacy and destroy the old republic of loosely organized states, replacing it with a centralized state.

Thomas J. DiLorenzo writes a masterful Foreword, connecting the cult of Lincoln with the sense of “false virtue” in the United States that was used to justify needless, brutal wars such as the Indian Wars, the Spanish-American War, the Philippine War, and the many U.S. interventions and invasions of sovereign states. He mentions the extent of the hatred of Lincoln during his lifetime, and the role of New Englanders in deifying him after his assassination and notes the results of Lincoln’s tenure as President: a “Soviet-style state” in which the union of states is forced at the threat of the sword. His excellent summary is a fine segue into Dr. Pace’s biography. 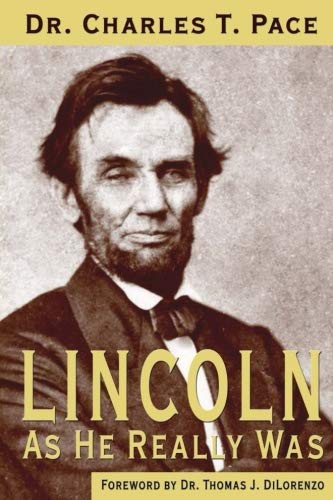 The introduction focuses on the lies of Lincoln’s legend—he was not a pioneer, did not like farming, and disliked physical labor, preferring the life of towns to life on the farm. He disliked reading, focusing on books on politics, never read a novel, and he lacked humility. His ambition was such that he tended to never be satisfied with his level of power, a trait those who knew him recognized. He enjoyed making as much money as possible. Dr. Pace notes that “His character was described by various associates as self-confident, aggressive, selfish, self-absorbed, and consumed with ambition for power” (7). Lincoln was obsessed with making his mark in the world, doing some great thing that would be remembered in the future. Dr. Pace is describing a narcissist, someone only out for himself, a utilitarian who used people for his personal ends. That may be the reason his contemporaries said he “never had a real friend.”

The account of Lincoln’s childhood notes that Thomas Lincoln, his father, was no country bumpkin, but was a well-respected member of the community. Abraham did not grow up poor, but as part of the middle class. He was physically strong, but one of his bosses said, “He didn’t love work half as much as his pay” (13). He was aggressive and prone to getting into fist fights. His darker side revealed itself when Lincoln was upset about his father’s dog barking, especially with Lincoln was trying to avoid work. “[Y]oung Lincoln sewed a coon skin to his hede, and the bigger dogs tore him to pieces” (14). While Dr. Pace does not belabor this incident, I believe it is important in helping to dissect Lincoln’s character. Lincoln would destroy anything, any animal, any human who interfered with what he wanted. His ruthlessness toward the dog reflected his ruthlessness in politics.

Lincoln was well-trained in rhetoric by his reading and was able to get continuous practice by speaking everywhere he could and through his practice as a lawyer. The source that helped lead him to use the Declaration of Independence, rather than the Constitution, in his talk about slavery was “Grimshaw’s History of the United States, written from “the New England viewpoint regarding slavery” (15). Lincoln was an abolitionist, but hid his views for political reasons. A well-known fact Pace mentions is Lincoln’s plan to send former slaves to South America and Africa. Realizing that the people of his home state of Illinois did not want Blacks in the state, Lincoln did not oppose their views—his goal was gaining power, getting elected.

Pace notes that Lincoln was not religious, but knew the Bible well, using quotations from it in his speeches in order to gain political points. In this area he tended to be more a man of the century prior to him, a man of the eighteenth century Enlightenment. However, his ideals tended toward the French Enlightenment; he was at most a deist, and perhaps an agnostic. Pace tends to think he leaned toward deism but was not a Christian in any sense, having rejected any special claims made for Jesus Christ other than Jesus being a great teacher. His use of the Bible for political gain reveals a cynicism and a drive to power that would use any means to reach its goals.

The Playbook of Big ConservatismThe Curious Death of Adlai Stevenson