Is Education a Constitutional Right?

An article in the September issue of The New Yorker makes the case that education is a fundamental right guaranteed by the Constitution.

Public schools in Detroit are failing to educate students. Just like they are failing to do so in many large cities throughout the country. A case in the federal court system, Gary B. v. Snyder, filed by Public Counsel and Sidley Austin LLP on behalf of a class of Detroit students, argues that students in Detroit public schools who failed to learn how to read were denied their due process and equal protection rights under the Constitution’s Fourteenth Amendment. The case was dismissed by a federal district court in Michigan in June, but has been appealed to the Sixth Circuit Court of Appeals in Cincinnati.

The plaintiffs, as well as the writer of the piece in The New Yorker (Jill Lepore) cite the Supreme Court case of Plyler v. Doe (1982). In his book The Schoolhouse Gate: Public Education, the Supreme Court, and the Battle for the American Mind (Pantheon, 2018), Justin Driver, a law professor at the University of Chicago, maintains that this case “rests among the most egalitarian, momentous, and efficacious constitutional opinions that the Supreme Court has issued throughout its entire history.”

The case came about after Texas education laws were changed in 1975 to allow the state to withhold funding from local school districts to educate the children of illegal aliens. The Court, by a 5-4 vote, ruled that the revised law violated the equal protection clause of the Fourteenth Amendment. The law “severely disadvantaged the children of illegal aliens” by “denying them the right to an education.” 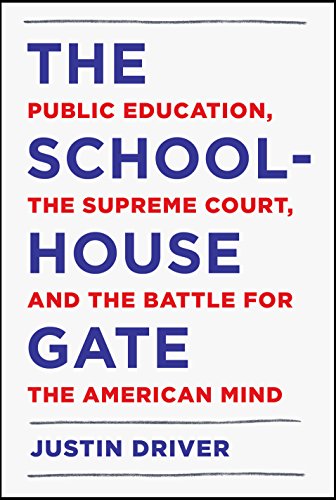 But of course, the law didn’t deny the children of illegals the right to an education; it denied them the right to an education at taxpayers’ expense. Their parents could have educated them at home, hired a tutor, or sent them to a private school. The fact that the parents didn’t have the ability to educate their children at home and couldn’t afford to hire a tutor or send their children to a private school is immaterial.

But regardless of what the Supreme Court said, education is not a constitutional right.

The United States was set up as a federal system of government where the states, through the Constitution, granted a limited number of powers to a central government. As James Madison succinctly explained in Federalist No. 45:

The powers delegated by the proposed Constitution to the Federal Government, are few and defined. Those which are to remain in the State Governments are numerous and indefinite. The former will be exercised principally on external objects, as war, peace, negotiation, and foreign commerce; with which last the power of taxation will for the most part be connected. The powers reserved to the several States will extend to all the objects, which, in the ordinary course of affairs, concern the lives, liberties and properties of the people; and the internal order, improvement, and prosperity of the State.

There are about thirty enumerated congressional powers listed throughout the Constitution. Most of those powers are found in the eighteen paragraphs of Article I, Section 8. One concerns commerce. One concerns naturalization and bankruptcies. One concerns post offices and post roads. One concerns copyrights and patents. One concerns federal courts. One concerns maritime crimes. One concerns the governance of the District of Columbia. Four of them concern taxes and money. Six concern the militia and the military. The last one—the “elastic” clause—gives Congress the power “to make all Laws which shall be necessary and proper for carrying into Execution the foregoing Powers.”

Elsewhere in the Constitution we read that Congress may also admit new states into the Union, propose amendments to the Constitution, regulate national elections, establish courts inferior to the Supreme Court, direct the location of the place for the trial of a crime not committed within a state, declare the punishment for treason, provide the manner in which the public acts and records in each state are accepted by the others, dispose of and regulate the territory or other property of the United States, give the states consent to lay imposts or duties on imports or exports, and provide for the case of the removal, death, resignation, or inability of the president or vice president.

Everything else is reserved to the states—even without the addition of the Bill of Rights and its Tenth Amendment.

But what about the Fourteenth Amendment?

The Fourteenth Amendment, ratified in 1868, says that “no State shall make or enforce any law which shall abridge the privileges or immunities of citizens of the United States; nor shall any State deprive any person of life, liberty, or property, without due process of law; nor deny to any person within its jurisdiction the equal protection of the laws.”

And neither does the Constitution authorize the federal government to spend one penny on education.

Lost in Translation By Going Nuclear