Apple quietly updated their privacy policy with a new controversial ploy stating they will now collect user and behavioural data from iPhone users and claims it will be used to prevent fraud.  But is this really what’s going on? Let’s have a look.

We live on a great planet, and there are a lot of incredible people here. Let’s not forget that. At the same time, there are some serious concerns that are rising and need to be brought to light regarding the people that basically control our planet, this powerful conglomerate that sit atop the financial pyramid control everything, including politics. This group is often called the Deep State or cabal.

This is something that can be seen given many examples, one basic example is the power that corporate America has on government and how decisions are really made. It’s not the people deciding what happens, and what happens is hardly even ever disclosed to the public, and if it is, it’s hardly done so in a truthful manner.

We’re living in an age of mass surveillance and data connection, one which the global elite claims is for our own protection in the “fight against terrorism,” a fight and a war that’s been based on lies and completely fabricated, as emphasized, shown and explained by many politicians, academicians and researchers around the world. It’s an important narrative to share, given the fact that it’s one mainstream media refuses to touch.

If the reasons for mass surveillance are not actually for our own safety, and truly for ‘national security’ reasons, then what is it for? Why are they doing it, and why are they doing it in such a secretive, sneaky, and powerful manner?

“At least 80% of fibre optic cables globally go via the US, this is no accident and allows the US to view all communication coming in. At least 80% of all audio calls, not just metadata, are recorded and stored in the US. The NSA lies about what it stores. The ultimate goal of the NSA is total population control.” – William Binney, a former high ranking intelligence official with the National Security Agency (NSA). He is one of the highest placed intelligence officials to ever blow the whistle

Bribery is also used, multiple politicians have explained how ‘men in dark suits,’ perhaps representatives of the Deep State that runs corporate America, and imposes its will on a global scale. When a president is elected into office, if they are elected, and not “selected” as Rosevelt once said, then they are most likely confronted with every piece of dirt that the Deep State has on them.

There are many things to consider, but ultimately, the agenda of those who control global politics remains intact no matter who is president, and those that become president are usually just puppets and ‘partners’ with this powerful group of international people.

All of this is important to mention whenever it comes to any type of surveillance or data collection activity. At lower levels of the spectrum, it’s also being used for profit, and our data, online habits, phone conversations and more are collected and sold to various corporations. There are even corporations teaming up with pharmaceutical companies to sell data related to your DNA. You can read more about that here.

We all know about data collection and Facebook, and other social media platforms…

The latest news comes from Apple, who just added a new addition to their privacy policy, stating that users of their devices will now receive individual scores based on the number of phone calls they make and emails they send. As they state:

To help identify and prevent fraud, information about how you use your device, including the approximate number of phone calls or emails you send and receive, will be used to compute a device trust score when you attempt a purchase. The submissions are designed so Apple cannot learn the real values on your device. The scores are stored for a fixed time on our servers.

All we get from these corporations are justifications for taking such action, and we buy into it. At the end of the day, we have a choice, and we can choose to support these products, or opt out for some better options. 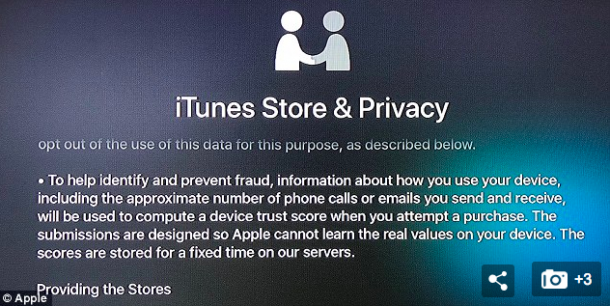 The explanation seems too vague, how does knowing how many phone calls or emails one sends combat fraud? Is this just a complete lie for something else that’s really going on? The truth is, transparency in our world, especially our corporate world, has gone completely fell down the drain. Big corporations have become a political tool. Take a look at Facebook, which basically became a tool of the intelligence agencies, and agencies like DARPA used to collect massive amounts of data and spy on people.

Now, it’s being used as a tool to censor information and shut down a narrative that doesn’t agree with ‘them.

Facebook also convinced users and businesses to bring all of their people and practices over to Facebook to create a community, only to see that community ripped out from under them as Facebook essentially said “You can’t reach your community anymore, pay us to reach them.” Yet Facebook profited billions off the data of your people. Good old bait and switch.

Are these corporations acting in a way that protects us? Or are we simply customers that represent billions in profit? Why do we continue to support corporations that these companies and what they do if we have other options? While we don’t yet know what this new data collection will be used for, can we not learn from the recent Facebook data scandals?

US Nuclear SafetyWhat Comes Next