The Birth of the West: Rome, Germany, France, and the Creation of Europe in the Tenth Century, by Paul Collins

Tenth century Europe rode in on the collapse of Charlemagne’s empire and rode out as foundational to what would be remembered by many as the high point of the Middle Ages.  Per Paul Collins, it was this century that gave birth to what we know (or once knew) as Europe.  Western civilization – the combination of the Frankish-Germanic people of northwestern Europe and Rome (or, perhaps, an idealized version of Roman civilization) – was formed during this period.

Certainly Collins notes that power was diffused; the idea of an absolute monarch didn’t enter Europe until the sixteenth century:

Instead, power in medieval society was noncentralized, consensual, and consultative, even if the consent was limited to the more powerful.

From my earlier reading, while the more powerful had more liberty in their consent, the less powerful were not left naked. 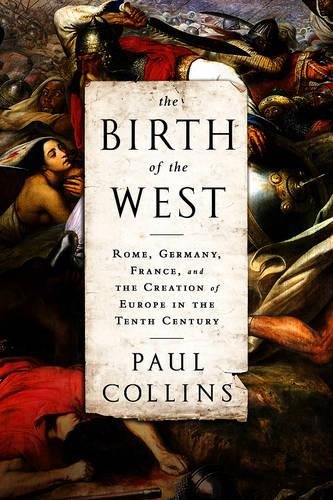 We are introduced to the raids and invasions of Vikings, Magyars, Saracens – all made the easier due to almost continuous fighting among and between brothers regarding inheritance and kingship.

While governance was decentralized, there was one thing binding all of the people:

Latin, or Western, Christianity, was the heart and soul of this new culture. Catholicism totally permeated this society, and there was no distinction whatsoever between church and state in our sense.  They were simply two sides of the same coin.

While Catholicism permeated the society, this did not mean that conflict was unknown between king and Pope.  The Pope used the kings, the kings used the Pope – partners when necessary, conniving when sensing weakness.  In the earlier period, the kings were generally ascendant; in the latter period, the papacy came to challenge this dominance.

It was the Saxons – brought to Christendom in the most violent manner by Charlemagne – that, perhaps, saved Christendom.  Further, Poland and Hungary were eventually converted; even the Vikings came to Christianity.

A few themes from the introduction…

The fallacy of medieval: the Church was intolerant, stoning heretics and burning witches, etc.  Not so.  We read of Archbishop Agobard of Lyon, in the early ninth century, who came across a scene of villagers about to stone two “sky sailors.”

The villagers faced a bad crop, and potentially starvation; it was believed that such conditions were brought on by evil men who served the devil.  These “sky sailors” were, instead, just unfortunate travelers, who happened by at just the wrong time.  It was Agobard – the Catholic Archbishop – that saved these two unfortunates from the anger of the villagers.

The land: everything was tied to the land – it wasn’t just the serfs.  Massive dense forests: the nobles hunting for sport, the peasants hunting for survival.  Peasants holding traditional rights to hunt (although the right to hunt “big game” was reserved to the nobles), gather firewood and other products.  Cleared forest – some of known origin, others from pre-history.  The idea of anyone having full and absolute property rights was unknown.

And now, a story: the Cadaver Synod.

The Cadaver Synod is the name commonly given to the posthumous ecclesiastical trial of Pope Formosus, held in the Basilica of St. John Lateran in Rome during January 897. The trial was conducted by Pope Stephen VI (sometimes called Stephen VII), who was the successor to Formosus’ successor, Pope Boniface VI. Stephen accused Formosus of perjury and of having acceded to the papacy illegally. At the end of the trial, Formosus was pronounced guilty and his papacy retroactively declared null.

A picture is worth a few thousand words: 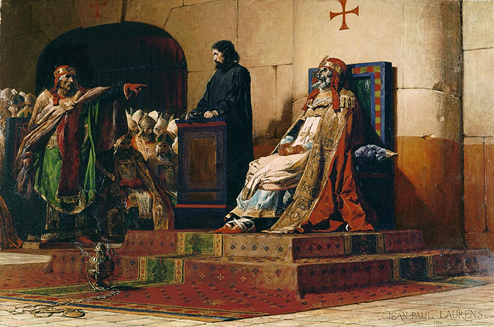 The poor deacon, standing next to the decaying body (dead nine months earlier), was responsible to answer for Formosus.  Talk about a lose-lose proposition!  If he speaks too well, it would mean his disfigurement, blinding, or even death.  Speak too poorly, and his own ordination at the hand of Formosus would be void.

What was Stephen’s beef?  It seems Stephen was ordained by Formosus to a position that would then preclude him from ever rightly and subsequently becoming Pope.  Having, despite this, ascended to the position of Pope with the help of some local, powerful families, he now had to declare Formosus’ ascendency to Pope as void and illegal – thereby voiding the earlier ordination of Stephen to the lower position.

The Cadaver Synod marked the beginning of some of the worst civil strife in Papal Rome, a condition that would continue for much of the subsequent century.

The Cadaver Synod also marked the nadir of Europe after Charlemagne.  Collins offers the lack of effective government after the fall of the Carolingian Empire as the cause of the violence and turmoil.  Of course, the creation of Charlemagne’s empire was not conflict free.  In order to make an omelet and all that.

It is notable that a prize named after the warrior Charlemagne has been awarded annually since 1950 to an individual who best exemplifies the European dream.