The Beginning of the End of the Bilderberg Era

The beginning of the end of the Bilderberg/Soros vision is in sight. The Old Order will cling on, even to the last of its fingernails. The Bilderberg vision is the notion of multi-cultural, international cosmopolitanism that surpasses old-time nationalism; heralding the end of frontiers; and leading toward a US-led, ‘technocratic’, global economic and political governance. Its roots lie with figures such as James Burnham, an anti-Stalin, former Trotskyite, who, writing as early as 1941, advocated for the levers of financial and economic power being placedin the hands of a management class: an élite – which alone would be capable of running the contemporary state – thanks to this élite’s market and financial technical nous. It was, bluntly, a call for an expert, technocratic oligarchy.

Burnham renounced his allegiance to Trotsky and Marxism, in all its forms in 1940, but he would take the tactics and strategies for infiltration and subversion, (learned as a member of Leon Trotsky’s inner circle) with him, and would elevate the Trotskyist management of ‘identity politics’ to become the fragmentation ‘device’ primed to explode national culture onto a new stage, in the Western sphere. His 1941 book, “The Managerial Revolution,” caught the attention of Frank Wisner, subsequently, a legendary CIA figure, who saw in the works of Burnham and his colleague a fellow Trotskyite, Sidney Hook, the prospect of mounting an effective alliance of former Trotskyites against Stalinism. 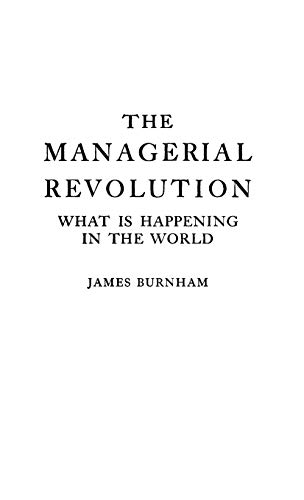 But, additionally, Wisner perceived its merits as the blueprint for a CIA-led, pseudo-liberal, US-led global order. (‘Pseudo’, because, as Burnham articulated clearly, in The Machiavellians, Defenders of Freedom, his version of freedom meant anything but intellectual freedom or those freedoms defined by America’s Constitution. “What it really meant was conformity and submission”).

In short, (as Paul Fitzgerald and Elizabeth Gould have noted), “by 1947, James Burnham’s transformation from Communist radical, to New World Order American conservative was complete. His Struggle for the World, [converted into a memo for the US Office of Strategic Services (OSS, the forerunner of CIA)], had done a ‘French Turn’ on Trotsky’s permanent Communist revolution, and turned it into a permanent battle plan for a global American empire. All that was needed to complete Burnham’s dialectic was a permanent enemy, and that would require a sophisticated psychological campaign to keep the hatred of Russia alive, “for generations”.

What has this to do with us today? A ‘Burnham Landscape’ of apparently, ‘centrist’ European political parties, apparently independent think-tanks, institutions, and NATO structures, was seeded by CIA – in the post war era of anti-Sovietism – across Europe, and the Middle East – as part of Burnham’s ‘battle plan’ for a US-led, global ‘order’. It is precisely this élite: i.e. Burnham’s oligarchic technocracy, that is facing political push-back today to the point at which the Liberal Order feels that it is struggling for its very survival against “the enemy in the White House”, as the editor of Spiegel Online has termed President Trump.

What has caused this? Well, like him or hate him, President Trump has played a major part, if only by saying the unsayable. The rationality or not inherent in these Eckhart-style ‘unsayings’, or apophasis, is beside the point: Trump’s intuitive ‘discourse of saying the unsayable’ has taken most of the bolts out of the former Burnham-type, ideological structure.

But in Europe, two main flaws to the Burnham blueprint have contributed, possibly fatally, to the blueprint crisis: Firstly, the policy of populating Europe with immigrants, as a remedy for Europe’s adverse demographics (and to dilute to the point of erasure, its national cultures): “Far from leading to fusion”, writes British historian, Niall Ferguson, “Europe’s migration crisis is leading to fission. The play might be called The Meltdown Pot … Increasingly … the issue of migration will be seen by future historians as the fatal solvent of the EU. In their accounts Brexit will appear as merely an early symptom of the crisis”. And secondly, the bi-furcation of the economy into two unrelated, and dis-equal economies, as a result of the élite’s mismanagement of the global economy, (i.e. the obvious the absence of ‘prosperity for all’).

Trump evidently has heard the two key messages from his constituency: that they neither accept to have (white) American culture, and its way-of-life, diluted through immigration; and, neither do they wish – stoically – to accommodate to America’s eclipse by China.

The issue of how to arrest China’s rise is primordial (for Team Trump), and in a certain sense, has led to an American ‘retrospective’: America now may only account for 14% of global output (PPP – Purchasing Power Parity basis), or 22%, on a nominal basis (as opposed to near half of global output, for which the US was responsible, at the close of WW2), but American corporations, thanks to the dollar global hegemony, enjoy a type of monopoly status (i.e. Microsoft, Google and Facebook, amongst others), either through regulatory privilege, or by marketplace dominance. Trump wants to halt this asset from decaying further and to leverage it again as a potent bargaining chip in the present tariff wars. This is clearly a political ‘winner’ in terms of US domestic grass-roots, politics, and the upcoming November mid-term elections.

The second strand seems to be something of a Middle East ‘retrospective’: to restore the Middle East to the era of The Shah, when ‘Persia’ policed the Middle East; when Israel was a regional ‘power’ implementing the American interest; and when the major sources of energy were under US control. And, further, when Russian influence was being attenuated, by leveraging radical Sunni Islam against Arab socialism, and nationalism.

Of course, Trump is savvy enough to know that it is not possible to revert wholly to that Kissinger-esque world. The region has changed too much for that. But Kissinger remains an influential adviser to the President (together with PM Netanyahu). And it is easy to forget that US dominance of the Middle East brought America not just control of energy, but the re-cycling of petrodollars into Wall Street, and the necklace of US military bases in the Gulf that both surround Iran, and give to the US its military muscle, reaching into Asia.

We have therefore Trump’s hugging of MBS, MBZ and Netanyahu, and a supporting narrative of Iran as a ‘malign actor’ in the region, and a facilitator of terrorism.

But, it is just a ‘narrative’, and it is nonsense, when put into a broader understanding of the regional context. The history of Islam has never been free from violent conflict (going back to earliest days: i.e. the Wars of the Ridda, or apostasy 632-3 etc.). But – lest we forget – this present era of Sunni radicalization (such as has given birth to ISIS) reaches back, at least, to the 17th and 18th Centuries, with the Ottoman disaster at the Gates of Vienna (1683); the consequent onset of the Caliphate dissolution; growing Ottoman permissiveness and sensuality, provoking Abd-el Wahhab’s radical zealotism (on which basis Saudi Arabia was founded); and finally the aggressive westernizing secularism in Turkey and Persia, which triggered what is called ‘political Islam’ (both Sunni and Shi’a that initially, were united, in a single movement).

The MBS narrative that Saudi Arabia’s ‘fundamentalism’ was a reaction to the Iranian Revolution is yet another ‘meme’ that may serve Trump and Netanyahu’s interests, but is just as false. The reality is that the modern Arab (Sunni) system, a holdover from the Ottoman era, has been in a long term channel of decline since WW1 – whereas Shi’i Islam is enjoying a strong revival across the northern tier of the Middle East, and beyond. Put rather bluntly: the Iranians are on the upside of history – it’s as simple as that.

And what Trump is trying to do is Iranian capitulation, in the face of the American-Israeli-Saudi siege, the key to undoing Obama (again), by trying to reassert US Middle East dominance, energy dominance and an Israeli resurgence of regional power. Subjugating Iran thus has emerged as the supreme litmus for re-establishing the unipolar global order.

It is so iconic precisely because, just as much as Trump would like to see Iran, Iraq and Iranian allies everywhere, fall to the unipolar hegemony, Iran is as central to the multipolar vision of Xi and Putin as it is iconic to Trump’s putative Middle East ‘makeover’. And it is not just symbolic: Iran is as pivotal to both Russian and Chinese geo-political strategies. In a word, Iran has more leverage to ensure survival than Trump may have anticipated.

America will leverage its dominance of the financial system to the limit to strangle Iran, and China and Russia will do what is necessary financially, and in terms of trade, to see that Iran does not implode economically – and remains a pillar of the multipolar alternative world order.

And it is here that the paradigm shifts in Europe come into play. It is not, I repeat not because Europe can be expected to show leadership or to ‘do’ much, but rather because the apophatic discourse of ‘saying the unsayable’ is spreading to Europe. It has not, so far, changed the paradigm of power, but may soon (i.e. with Merkel’s possible political demise). Germany may be more staid in its politics than Italy, but the voice of Italy’s new Interior Minister, Matteo Salvini, saying ‘no’ to the ‘Burnham’ proxies in Berlin is echoing across Europe, and beyond. It acts like a slap in the face.

Let us be absolutely clear: We are not suggesting that Europe will expend political capital in defending the JCPOA. That is not likely. We are saying that America’s dollar hegemony has proved toxic to the rest of the world in very many ways, and Trump – in leveraging that hegemony so gangsterishly: “We’re America, Bitch”, as one official described America’s approach – is fueling antagonism towards dollar hegemony (if not yet towards America per se). It is pushing all of non-America into a common stance of rebellion against America’s unipolar financial dominance.

This ‘revolt’ is already giving leverage to Kim Jong Un, as the Washington Post reports:

“With U.S.-China trade ties on the rocks, Kim is well-positioned to play both powers, talking sweet to Trump while pursuing a closer relationship with Xi…Kim understands the hierarchy. He knows that Xi is the Asian Godfather,” said Yanmei Xie, a China policy analyst at Gavekal Dragonomics, an economic research firm in Beijing. “He is making a pragmatic calculation that China can provide economic assistance to integrate North Korea diplomatically and economically into Northeast Asia …

“There is a regional effort, a sort of Northeast Asia coalition of make-believe, to maintain the fiction that the North Korea will de-nuke as long as Americans keep talking to it,” Xie said.

China is less focused on getting Kim to give away his weapons than on getting him to fall into line. It may eventually use trade and investment to keep him onside, experts said.

“China can also help Kim normalize North Korea’s diplomatic status. That starts with treating him less like a rogue dictator and more like a visiting statesman.”

The same goes for Iran — in spades. China and Russia know how to play this game of ‘chicken’.