It’s truly amazing how much the consciousness of the planet has changed within the past 5 years alone, and it’s not just happening within one topic, but in several different areas ranging from health to geopolitics and everything in-between.

People are really starting to wake up and see through the mass amounts of propaganda and lies we are continuously fed via the mainstream media, with regards to global events and other major areas that surround all aspects of humanity.

Known as “the father of public relations”, Edward Bernays sums it up quite well,

“The conscious and intelligent manipulation of the organized habits and opinions of the masses is an important element in democratic society. Those who manipulate this unseen mechanism of society constitute an invisible government which is the true ruling power of our country. We are governed, our minds are moulded, our tastes formed, our ideas suggested, largely by men we have never heard of .” – Propaganda, 1928

This massive ‘awakening’ I am referring to has become evident, as words such as “deep state” and “false flag terrorism” have now become commonplace within mainstream media rhetoric, with multiple global politicians referencing it frequently. Take Russian president Vladimir Putin for example, on more than one occasion he has called out the western military alliance, and the “magical” and “mythical” threats they create to justify economic and geopolitical action & intervention into other countries for ulterior motives.

Or how even Syrian president, Bashar Al-Assad, explained how Donald Trump is just another tool for the Deep State. The acknowledgment of the Deep State is huge as multiple presidents and politicians have been trying to tell the American public about it for years.

Former president of the United Staes,Theodor Roosevelt, was among many who tried to warn us that both parties have strayed from their original purpose and that instead of politics being a tool to promote the general welfare of the masses, “they have the tools of corrupt interests which use them impartially to serve their selfish purposes. Behind the ostensible government sits enthroned an invisible government, owing no allegiance and acknowledging no responsibility to the people.” (source)

For us at Collective Evolution, it’s fascinating because we’ve been writing about topics like the Deep State for years, and to have major political players acknowledge these things definitely raises an eyebrow.

The best example of false flag terrorism could very well be 9/11 with the most recent being the supposed chemical gas attack that took place in Syria. Are the global elite manufacturing these events, and blaming it on one another in order to justify their desired actions?  Is everything we are told about terrorism and a heightened natural security state all based on false premises?

Syria and the history of Syria is a great example, the document titled “Syria: Scenarios of Dramatic Political Change,” was written in July of 1986 by the Foreign Subversion and Instability Center, part of the CIA’s Mission Center for Global Issues. It states its mission to analyze “a number of possible scenarios that could lead to the ouster of President Assad or other dramatic change in Syria.” Though the document is 25 years old, it shows that the U.S. plans to influence and infiltrate Syria to create change that would suit their own interests date back well over 30 years.

The document also comes with similar testimony from insiders. One example would be former Four Star General Wesley Clark, who was the Supreme Allied Commander of Europe of NATO from 1997-2000. Clark said, in an interview with Democracy Now, that the U.S. had plans to invade countries in the Middle East, including Syria, for no justified reason at all.  He offered the sentiments of some within the American military, that they have a “good military” and that they can “take down governments.” He spoke of a memo that described how the U.S. had “plans to take out seven countries in five years, starting with Iraq, and then Syria, Lebanon, Libya, Somalia, Sudan, and finishing off, Iran” (source).

So, Who Created Al-Qaeda & ISIS?

“We are dealing with a criminal undertaking at a global level … and there is an ongoing war, it is led by the United States, it may be carried out by a number of proxy countries, which are obeying orders from Washington … The global war on terrorism is a US undertaking, which is fake, it’s based on fake premises. It tells us that somehow America and the Western world are going after a fictitious enemy, the Islamic state, when in fact the Islamic state is fully supported and financed by the Western military alliance and America’s allies in the Persian Gulf.”

The quote above comes from prominent author and Canadian economist, Dr. Michel Chossudovsky, who is the University of Ottawa’s Emeritus Professor of Economics, speaking at the International Conference on the New World Order, which was organized and sponsored by the Perdana Global Peace Foundation a couple of years ago.

As you can see, this sentiment is shared by many and one of the latest to voice their opinion comes from a person by the name of Garikai Chengu, who is currently pursuing graduate studies at Harvard University.

“Much like Al Qaeda, the Islamic State (ISIS) is made-in-the-USA, an instrument of terror designed to divide and conquer the oil-rich Middle East and to counter Iran’s growing influence in the region. The fact that the United States has a long and torrid history of backing terrorist groups will surprise only those who watch the news and ignore history.”

Here’s another great point that he makes,

“America’s relationship with Al Qaeda has always been a love-hate affair. Depending on whether a particular Al Qaeda terrorist group in a given region furthers American interests or not, the U.S. State Department either funds or aggressively targets that terrorist group. Even as American foreign policymakers claim to oppose Muslim extremism, they knowingly foment it as a weapon of foreign policy.”

He provides many examples in his paper, asking readers to remember when the “CIA gave birth to Osama Bin Laden and breastfed his organization during the 1980’s.” Briefly, he recalls Former British Foreign Secretary, Robin Cook, telling the House of Commons that Al Qaeda “was unquestionably a product of western intelligence agencies.”

“The truth is, there is no Islamic army or terrorist group called Al-Qaeda, and any informed intelligence officer knows this. But, there is a propaganda campaign to make the public believe in the presence of an intensified entity representing the ‘devil’ only in order to drive TV watchers to accept a unified international leadership for a war against terrorism. The country behind this propaganda is the United States.” – Robin Cook

Today, we have multiple whistleblowers hammering this point home. Here’s a video of FBI whistleblower, Sibel Edmonds, appearing on RT news. She is a former FBI translator and founder of the National Security Whistleblowers Coalition (NSWBC). She gained a lot of attention in 2002 after she accused a colleague of covering up illicit activity involving Turkish nationals, which included serious security breaches and cover-ups, alluding to intelligence that was deliberately suppressed. She basically points to the belief that ISIS is the creation of those who are calling them terrorists.

Another recent example comes from Edward Snowden. Below is a  retweet from Snowden, where Dr. Max Abrahms, an assistant professor of political science and public policy at Northeastern University who specializes in international security, especially terrorism, posits the connection between the CIA and Al-Qaeda. The tweet concerns Even McMullin, a former operations officer for the CIA who also ran during the 2016 U.S. presidential election. He’s served as a senior adviser on national security issues for the House Committee on Foreign Affairs as well as a Chief Policy Director for the House Republican Conference in the U.S. House of Representatives. He has also worked as an investment banker.

McMullin responds by ridiculing the assertion, which should raise immediate red flags. You would think he would offer a respectful, intelligent response, but many within the intelligence community and the “1 percent” desire to make people feel stupid for even raising an issue like this in the first place. It’s reminiscent of other controversial issues today, like vaccines. When proper dialogue ceases, and one side uses ridicule to share their beliefs, it’s most likely that they have something to hide, and the tweet below this one perfectly illustrates that.

Snowden retweeted this on September 12th, a day after the 9/11 anniversary. 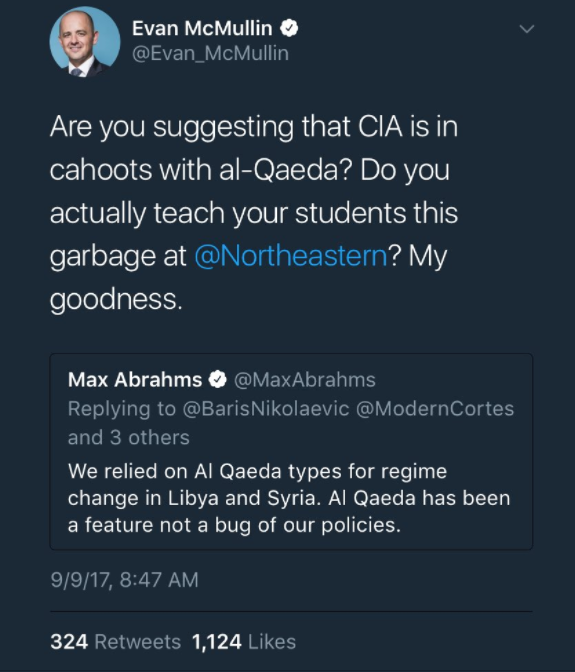 “The so-called “War on Terror” should be seen for what it really is: a pretext for maintaining a dangerously oversized U.S. military. The two most powerful groups in the U.S. foreign policy establishment are the Israel lobby, which directs U.S. Middle East policy, and the Military-Industrial-Complex, which profits from the former group’s actions. Since George W. Bush declared the “War on Terror” in October 2001, it has cost the American taxpayer approximately 6.6 trillion dollars and thousands of fallen sons and daughters; but, the wars have also raked in billions of dollars for Washington’s military elite.” – Garikai Chengu

You can read Chengu’s entire article which was posted on Global Research, HERE.

So What Can You Do? How Does This Change Your Life?

Perhaps the most interesting fact about this type of information surfacing is that it completely goes against mainstream media rhetoric. In a world where our media outlets are presenting information that completely contradicts evidence to the contrary, what is one who is interested in the pursuit of truth supposed to do?

Most are aware of who is dishing out the real “fake news,” and it’s especially questionable when we have so many sources that go against the mainstream narrative. What’s even more concerning is the idea that the government wants to be the determiner of what is real and what is fake. Should we not be able to do this for ourselves? Should we not be able to put on our critical thinking caps? Are we ourselves not capable of looking at a variety of sources of information and examples instead of simply relying on our television screens, and people with influence to sway the perceptions and minds of the masses?

At the end of the day, that’s all this is, a war on our consciousness, and it’s quite clear that they don’t really want us thinking for ourselves.

This type of information is an “ah ha” type of catalyst. The more we begin to see, and at least become aware, is a start and helps leads to action. Just take a look at Genetically Modified Foods (GMO), activism and awareness have been responsible, and as a result, most of the food that’s legal in North America is now completely banned in multiple countries across the world.

It’s the same thing with terrorism and a war in general. At the end of the day, we’ve been brainwashed and continue to be brainwashed to accept the reasons for war. The moment we wake up, the moment we have that “ah ha” moment, is the moment we start changing. That’s the moment the soldier themselves stops pulling the trigger.

Change starts with us, and the moment we no longer allow ourselves to be used as tools for the motives and ends of powerful men, is when we start changing the world, and we’re currently in that process! One of the most powerful things you can do is when provided the opportunity, don’t be afraid to speak up and share an opinion that goes against the grain.

The Politics of Obedience: A Discourse of Voluntary ServitudeOnly Stupid Countries