Death by Regulation: How We Were Robbed of a Golden Age of Health and How We Can Reclaim It

Most people believe government agencies like the Food and Drug Administration keep them safe. But a book by Dr. Mary J. Ruwart explodes this myth.

People often argue that without the protection of government agencies, we would face constant peril. Allegedly, without the FDA, our pharmacy shelves would be lined with unregulated products containing deadly substances, marketed by the unscrupulous.

Of course, this argument rests upon the unspoken assumption that the laws and regulations enforced by the FDA are benign, causing little or no harm, and few, if any, deaths. It also rests upon the assumption that, without government regulation, there are no market-based mechanisms for certifying the safety of drugs and products.

In her important new book, Death by Regulation: How We Were Robbed of a Golden Age of Health and How We Can Reclaim It, Dr. Ruwart provides information which thoroughly refutes these assumptions.

Dr. Ruwart holds a B.S. in biochemistry, a Ph.D. in biophysics and spent 19 years as a pharmaceutical research scientist for the Upjohn Company. She has also chaired an IRB (Institutional Review Board), consulted with nutraceutical companies and been an expert witness against the FDA. Therefore, she is intimately familiar with the impact of the FDA and the laws and regulations it enforces. Her easily digestible book focuses specifically upon the detrimental impact of the 1962 Amendments to the 1938 Food and Drug Act (“the Amendments”). 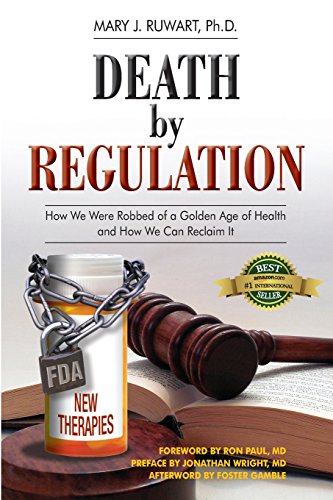 Dr. Ruwart reviews the burdensome effects of the Amendments, including a lengthening of the average period for new drug development from approximately four years to 14 years. She explains the numerous additional requirements set forth in the Amendments, and the additional development time caused by them and provides heartbreaking examples of the effect of this wait time on those with life-threatening illnesses.

For example, she discusses how, in the early years of the AIDS epidemic, United States AIDS patients often had to travel to other countries with fewer regulatory requirements to obtain new therapies still unapproved by the FDA, sometimes having the drugs confiscated upon reentry to the United States. She further discusses black market AIDS Buyers’ Clubs which quickly formed in response to the need for therapies and hired chemists to make drugs undergoing development, in violation of pharmaceutical companies’ patents. She also points out that, although making, selling and distributing these drugs without FDC approval violated the law, the FDA often took no action against most violators, “especially those in California who were well organized and vocal,” and that instead “the FDA selectively prosecuted those who were least likely to fight back.” This illustrates that organizing and fighting back against unfair laws can be effective in preventing or reducing their enforcement.

Dr. Ruwart also reminds us of the wholly unseen effect of the Amendments: the drugs that will never be developed, which otherwise likely would have been, due to the burdensome costs added by the Amendments. She shows how significantly these costs have increased in the decades since the passage of the Amendments and the unsustainable trajectory of the costs. She further points out the logical conclusion, that, if unabated, these rising costs will result in no new drugs at all. Clearly, pharmaceutical companies will decline to develop drugs with anticipated developmental costs that exceed anticipated profits. Because these undeveloped drugs, which are never pursued by the pharmaceutical companies, are “unseen” by the American public, it fails to grasp the full extent of the harm caused by the FDA and the Amendments.

Dr. Ruwart also describes a paradigm shift, away from prevention and toward treatment, caused by the Amendments.

She reviews the importance of nutrition to health, with illustrations from her own experience in altering laboratory animals’ nutrition in order to create diseases for laboratory study. She explains that natural products can be patented under certain circumstances, but that the Amendments’ costly requirements have caused pharmaceutical companies to largely abandon manufacturing vitamins and natural substances.

Ruwart also discusses the seizure of products, and even criminal prosecution, that companies selling nutritional products risk if they claim that their products can treat a disease.

She provides yet another heartbreaking example of harm caused by the Amendments in describing what she refers to as the “American Thalidomide” tragedy, which prevented folic acid manufacturers from advertising the benefits of folic acid, taken early in pregnancy, in preventing neural tube defects such as spina bifida. As Ruwart points out, this tragedy is especially ironic, because the Amendments were purportedly intended to prevent tragedies such as the birth defects caused by the drug thalidomide.

Perhaps the most important chapter in the book is Chapter 50, “Certification is the Alternative to Regulation. This section may enlighten those who can imagine only state oriented solutions to problems. The chapter discusses the existence of an effective, private solution for protecting consumers. Dr. Ruwart explains that certification occurs when professional or consumer groups give their “seal of approval” to a product or service and cites as an example the Underwriters Laboratories, Inc. (UL), a private certifying agency which tests appliances and electrical hardware and grants, to those that meet its standards, its UL Seal of Approval. Most retailers will not sell appliances without the UL Seal of Approval and Ruwart points out that this voluntary, private certifying agency has been successful in keeping consumers safe for decades. She explains that, if FDA approval became optional, third-party drug testing and certification could become part of the “consumer landscape” to protect consumers.

Dr. Ruwart’s book strikes a solid blow to the myth of government as our protector and illustrates the harmful impact often caused by even well-intentioned laws and regulations. Her book is well written, well researched and should be added to the library of those interested in medical freedom.

They’re Drinking the Cities DryWant Your Heart to Repair Its Damage and Grow Stronger?