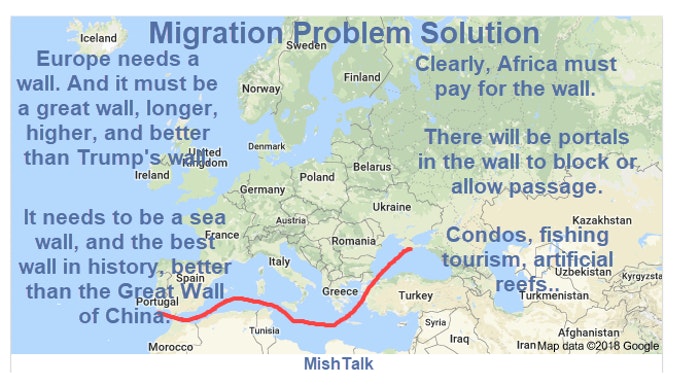 Given the incessant bickering between EU countries over migration issues, it’s time to think outside the box. Here is the 5-Point Dilemma.

I cannot take credit for this brilliant idea, but Europe needs a wall, and Africa needs to pay for it.

Angela Merkel knows she is not going to get a refugee deal. The question is, can she sell what she will get to her sceptical sister party? Will she get a bit of extra time, enough to tide her over until after the Bavarian election? Will it enable the CSU to claim victory, or at least avoid humiliation?

We cannot rule out that the CSU falters at the last minute. But they have leaned themselves so far out of the window that a last-minute retreat would be considered a hard sell, politically. If the purpose of this exercise was to score points ahead of the Bavarian election, a retreat would be the equivalent of losing at football against South Korea.

Giuseppe Conte secured his senior team’s backing for a hard line in the Council negotiations. The Huffington Post Italia report this morning that he is going to Brussels with the determination to veto any agreement on refugees unless there is a commitment to reform the Dublin regulation.

One issue the CSU will have to explain – and hasn’t done so – is how the CSU’s plan would work in practice. [See Point Number 2 above] Austrian interior minister Herbert Kickl, a member of the FPÖ and a close ally of Salvini’s said if Germany decides to send back refugees, Austria would not take them. And we cannot see Italy taking them either. So, where would they go?

And we noted before that Italy could easily respond to Seehofer’s unilateralism by failing to register refugees. That would be a blatant violation of the Dublin regulation, but Seehofer’s position is also in breach of European rules. [See point number 3]

In terms of the feasibility of Tusk’s strategy to solve the problem at the external border, we share the scepticism of the CSU. It is illusionary to think that the EU will be able to protect its borders to stem the flow of immigrants completely. The option of building a wall, and letting Africa pay for it, is simply not available because of geography. [Right on the crux of victory, Eurointelligence threw away the logical solution.]

This brilliant idea seems to handle all positions except point number one. But Merkel will soon be gone so who cares?

To address point number 5, the EU can build floating safe areas in the Mediterranean Sea.

Government Spending Pays For Itself!

Many naysayers will pooh-pooh this project, but please remember the primary thrust of Keynesian and MMT theory: Government spending pays for itself!

A massive number of jobs will stem from this project! Inflation? You bet. It’s nearly every economist’s wet dream at the moment.

Rather than paying people to do nothing, we can pay them to build the world’s most beautiful wall, complete with hanging gardens.

The wall will be so beautiful, Tourists will pay to go see it.

Given that Paul Krugman once proposed (seriously) the world could use a fake space alien threat to spur growth, how could he possibly object to this marvelous project.

Krugman later claimed he was being facetious, but play the video. He was dead serious.

He even admitted to Bill Maher on Real Time that he was serious.

Instead of wasting money fighting a fictional space alien threat, why not build a great wall?

Previous article by Michael Shedlock: Get Ready To Pack Your Bags