My website was down early this morning, and I’m just a little suspicious that it had something to do with me expressing an opinion outside the “Overton Window” of what is considered acceptable discourse on illegal immigration. Namely, that it’s illegal, with all that implies. At least I wasn’t thrown out of a restaurant over the weekend, though the fact is I didn’t even try to eat out.

Now my particular problem may turn out to be no more than a cockroach chewing through some wires in the Jersey server farm where this blog dwells — we’ll find out soon enough — but there are obviously other signs that “the Resistance” is tuning up the antagonism against its perceived enemies.

I’m in the peculiar position of not being a partisan of President Trump, and yet being a publicly avowed enemy — if there’s any doubt — of the Resistance, especially these days its institutional branch known as the Democratic Party. What a ragtag and bobtail of mendacious cowards it has become.

The truth, I believe, is that the party wants to bring as many Mexicans and Central Americans as possible across the border, by any means necessary, to fortify its future voter base. And so they are acting to insure that it happens. Of course, this might also be viewed as a suicidal course of action for the party, since it puts them in opposition to the rule-of-law as a general principle, which is a pretty sketchy basis for any claim to govern. That being the case, the outcome for the Democratic Party may be its own demise as a legitimate political bloc. It’s one thing to ignore the economically foundering, traditional working-class constituency of actual US citizens who are having a tougher time every year making a living; it’s another thing to bring in a several-millionfold population of non-citizens to replace them.

Anyway, it’s a pretty poor strategy for success in the coming mid-term election. The effort got a boost over the weekend from Congresswoman Maxine Waters (D-Cal) who called for Trump administration employees to be thrown out of department stores and other retail establishments as well as restaurants. Why stop there? Why not enslave Trump employees and supporters? Force them to work without pay in the Chick-Fil-A regional distribution warehouses? One wonders what House Minority Leader Nancy Pelosi thinks of Ms. Waters’ proposal. Other Democratic party leaders zipped their pie-holes about it.

It may also be the case that the majority Republicans in congress are cowed and anxious about doing anything legislatively to clarify the disheveled US immigration laws. If that’s true, they might pause to consider that their own party is not so far from whirling around the drain, too, from a consistent demonstrated lack of principle — as well as its uncomfortable association with the maverick president who only nominally leads the party.

The trouble is that the entities waiting to replace both the useless, careless, feckless Democrats and Republicans are chaos and violence, not reconstituted parties with coherent political programs. The US, and really all the so-called advanced nations on earth, are heading into an era of scarcity and austerity that is likely to present as mortal conflict. 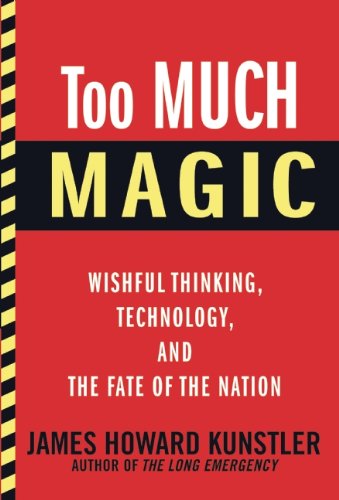 Bill Maher could easily get his wish of an economic crisis before many more months go by. The financial markets have never been under so much lethal stress. Everybody and every institution is drowning in debt that can’t possibly be repaid. The supposed remedies for that — like, inflating the debt away with official monetary policy — would be ruinous for the 99 percenters already struggling to lead normal lives. And the looming novelty of a cashless society would be even worse in terms of personal liberty.

Ah! We somehow miraculously got the website back up-and-running to post at the usual time today. Last week, I was awash in censure and obloquy for dissing the Resistance stand on illegal immigration, the alleged “torture” of children separated from their parents (or plain parentless) at the US / Mexican border. Much of the published opprobrium against Trump and the federal authorities under him proved to be quite false — such as the weeping child on the cover of Time Magazine, who was, in fact, not separated from her mother (a previous deportee who abandoned her husband and several other children in Honduras). As far as I know, Time Magazine has not offered an explanation or an apology for this attempt to misrepresent reality to an already confused American public.

Space Command Is About To Launch!The Great Ron Paul