Storm Clouds Brewing: It’s Like Deja Vu All Over Again

Everything is great. We’re riding high. The stock market is up. Employment is up. Analysts and pundits see nothing but smooth sailing ahead.

As an article published at The Conversation pointed out, there were two key problems lurking below the surface in the mid-2000s that few people paid any attention two. Those same two factors exist today. And once again, few people are paying much attention.

Looking back at the mid ‘oos, the economy seemed to be chugging along. But inflation-adjusted household incomes were lower than they were in the late 1990s. To maintain their standard of living, people took on more debt. At the time, it wasn’t a problem. Interest rates were still low thanks to the Federal Reserve’s monetary policy in the wake of the dot-com bust. Underwriting standards were also low. Banks and credit card companies were happy to loan money, even to people with marginal creditworthiness.

Fast forward to today. Household debt has now risen above pre-crisis level. Last month, the New York Fed released the latest data on US household debt, revealing it has grown to a record $13 trillion. 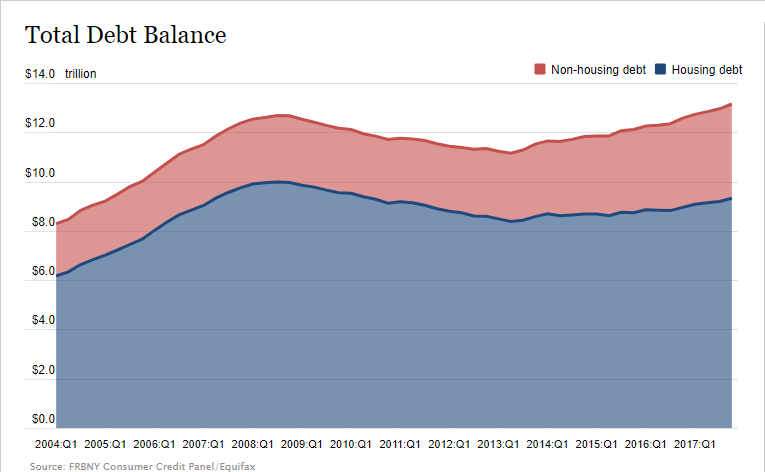 And of course, when you have debt, you have to service that debt. Analysts at The Conversation estimate the resulting interest payments on nonmortgage household debt have reduced living standards of the typical household by 3.1 percent since 2008. As the article pointed out, this either lowers consumption or prolongs the vicious cycle of more and more household debt.

So, what about the housing bubble?

Skyrocketing housing prices in the mid-2000s outstripped stagnant incomes. That drove banks to come up with more and more creative financing options so people could continue to buy homes. People were taking out risky mortgages that they would never be able to pay back. 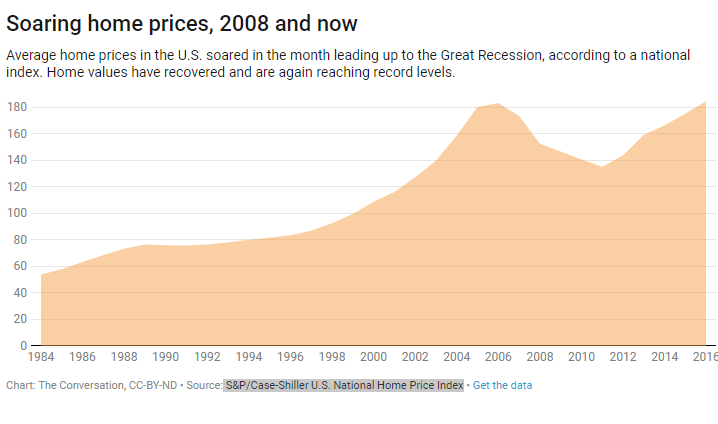 When we look at what the Federal Reserve was doing then and now, things get even more eerily familiar.

In 2004, the Fed began nudging up interest rates.

In 2015, the Fed began nudging up interest rates.

As The Conversation put it, storm clouds are brewing.

Home prices and consumer debt are again at record highs, and the Fed has been steadily raising benchmark borrowing costs for over a year now. The central bank is expected to accelerate the process because the recent tax cut is likely to cause inflation to rise, requiring the Fed to lift interest rates to cool things down. This will hurt the housing market, pushing more homeowners underwater and making it harder for them to pay their mortgages and repay other debt.

“At the same time, incomes have only grown modestly and, as our research shows, average American households have 6% to 7% less spending power than they did a decade ago, before the global financial system collapsed. Something will have to give. Households can take on more debt to maintain their living standards for a short while, or they can significantly reduce their spending.

It really is like deja vu all over again.