Required Reading On How The War For Southern Secession Really Started

After reading this book (as a military veteran and northerner) it would seem that no one can conclude other than that Lincoln intentionally started the War. How many realize that armistices existed with South Carolina (December 6th, 1860 involving Ft Sumter) and Florida (January 29th, 1861 involving Ft Pickens)? To violate any part of the terms of an armistice means that a state of war exists. Lincoln apparently violated both before Ft Sumter was fired upon by the South but this has been covered up by court and gatekeeper historians. It was asserted unequivocally, that the election of 1860 empowered Lincoln’s ‘party’ to enforce their political theories on the country, regardless of the Constitution, the laws, the rights of the States, or the decisions of the Supreme Court; and that Lincoln would do so. 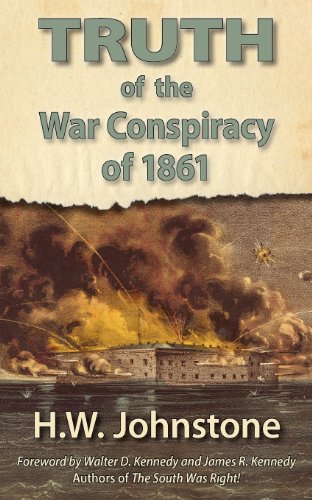 However, five days before Lincoln was inaugurated Congress passed a Resolution pronouncing the practice of pushing political theories using “legalized” force exercised by the Federal Government (as promulgated by Sam Chase and several Northern States), to be violations of the Constitution. The new Congress (elected Nov 1860) was more favorable to the Constitution being upheld than the outgoing Congress. Knowing this Lincoln ordered an army of 75,000 men to be organized and equipped without Congress’s approval and prevented Congress from convening until July 1861 when War was assured. Read Lincoln’s First Inaugural Address. He cared much more about His tariff that supported the Federal Government (paid about 80% by the South) than anything WRT slavery (see Robert DiLorenzo’s books among others on this).

This book is an important addition to inclusive history providing information most people have not been exposed to as the historical myths pressed upon the American people by big government elités and a biased academia continue to be exposed.

Blown AwayCan We Finally Have an Honest Discussion