Take Ownership of Your Bolshevism, Bernie!

Once upon a time, the Great and Learned People of our society believed that we could have our own form of communism without all of the starvation, mass executions, and imprisonment that marked the establishment of communism abroad. When Leonard Silk, economics editor of the New York Times, wrote The Economists in 1978, he named his chapter on John Kenneth Galbraith, “Socialism Without Tears.” Yes, “American Exceptionalism” also extended to the imposition of socialism that would bypass the death and chaos that marked the communist “experiments” in the USSR, China, and Southeast Asia.

Galbraith believed that the Soviet economy would be superior to the distasteful market economy that plagued the USA, and so did Paul Samuelson, whose famed text showed how in due time, the Soviet economy would grow faster than that of the United States, and someday be more productive. All that was needed was the political will for Americans to reach for the Horn of Plenty, something that evil capitalists did not want to see happen.

Enter Sen. Bernie Sanders of Vermont, the erstwhile Democratic presidential candidate who could argue forthrightly that Hillary Clinton and the party leadership stole the election from him. Bernie promoted socialism, although socialism of the “right” kind, something practiced in Denmark and Scandinavia. (That those countries have lower taxes and fewer regulations on business enterprises is not something Sanders would admit aloud, as such information would have been anathema to him and his followers.) 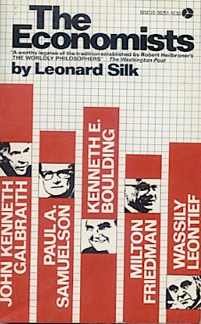 That Bernie wanted a “nice” socialism, a “socialism without tears” is supposedly his political salvation. There is no need for the murder and violence that accompanied the Russian and Chinese communist revolutions, although even there one had to remember that many prominent Americans, including Galbraith, were effusive in their praise of the results of those revolutions. Galbraith even had been to China, was wined and dined, and wrote “A China Passage” as a tribute to the utopia that Mao and his underlings had created, and it is clear that Galbraith saw China as a shining example of what an “egalitarian” economy could be, plain shops and all.

One doubts that Bernie Sanders would have found anything with which to disagree in Galbraith’s words. After all, as a younger man, he self-identified himself as a Trotskyite, and even took his honeymoon in the USSR in 1988, and already had engaged in the globetrotting to communist nations to praise their healthcare systems.

On the campaign trail last year, Sanders emphasized that he did not believe in the bloody methods used to establish the utopian economies he so praised in his travels. What reasonable person would declare in an American presidential campaign that what we needed were mass executions, a vast gulag system, and outright starvation of people to show them who is boss. That was Stalin, not Trotsky!

Here is the problem: there was no “kinder, gentler” Trotsky. From the beginning, Trotsky understood that terror was necessary to establish the utopian system the Bolsheviks were planning to implement. Whatever claims might have been made by the People’s Party, the Trotskyite organization to which Sanders belonged in 1972, Trotsky did not seek non-violent ways to force the Bolshevik system onto hapless Russians.

What were some of the things that Sanders’ political idol did in his relentless drive to establish a communism? In Trotsky’s own words: “…the historical tenacity of the bourgeoisie is colossal… We are forced to tear off this class and chop it away. The Red Terror is a weapon used against a class that, despite being doomed to destruction, does not want to perish.” Among the deeds committed by Trotky’s minions to carry out the Red Terror included:

At these times, there were numerous reports that Cheka interrogators utilized torture methods which were, according to Orlando Figes, “matched only by the Spanish Inquisition.” At Odessathe Cheka tied White officers to planks and slowly fed them into furnaces or tanks of boiling water; in Kharkiv, scalpings and hand-flayings were commonplace: the skin was peeled off victims’ hands to produce “gloves”; the Voronezh Cheka rolled naked people around in barrels studded internally with nails; victims were crucified or stoned to death at Dnipropetrovsk; the Cheka at Kremenchukimpaled members of the clergy and buried alive rebelling peasants; in Orel, water was poured on naked prisoners bound in the winter streets until they became living ice statues; in Kiev, Chinese Cheka detachments placed rats in iron tubes sealed at one end with wire netting and the other placed against the body of a prisoner, with the tubes being heated until the rats gnawed through the victim’s body in an effort to escape.

Executions took place in prison cellars or courtyards, or occasionally on the outskirts of town, during the Red Terror and Russian Civil War. After the condemned were stripped of their clothing and other belongings, which were shared among the Cheka executioners, they were either machine-gunned in batches or dispatched individually with a revolver. Those killed in prison were usually shot in the back of the neck as they entered the execution cellar, which became littered with corpses and soaked with blood. Victims killed outside the town were moved by truck, bound and gagged, to their place of execution, where they sometimes were made to dig their own graves.

According to Edvard Radzinsky, “it became a common practice to take a husband hostage and wait for his wife to come and purchase his life with her body”. During Decossackization, there were massacres, according to historian Robert Gellately, “on an unheard of scale”. The Pyatigorsk Cheka organized a “day of Red Terror” to execute 300 people in one day, and took quotas from each part of town. According to the Chekist Karl Lander, the Cheka in Kislovodsk, “for lack of a better idea,” killed all the patients in the hospital. In October 1920 alone more than 6,000 people were executed. Gellately adds that Communist leaders “sought to justify their ethnic-based massacres by incorporating them into the rubric of the ‘class struggle'”.

Members of the clergy were subjected to particularly brutal abuse. According to documents cited by the late Alexander Yakovlev, then head of the Presidential Committee for the Rehabilitation of Victims of Political Repression, priests, monks and nuns were crucified, thrown into cauldrons of boiling tar, scalped, strangled, given Communion with melted lead and drowned in holes in the ice. An estimated 3,000 were put to death in 1918 alone.

The murder of Russian clergy and nuns is especially relevant given the recent attack that Sanders made upon Christianity in general and the Christian beliefs of a political nominee during a recent Senate confirmation hearing. Despite Sanders’ stated commitment to separation of church and state, the Vermont senator took it upon himself to condemn specific Christian beliefs and declare that they were (in his words) “unacceptable” with secular American views. To put it bluntly, Sanders was saying that the nominee, Russell Vought, had Christian beliefs that contradicted secular viewpoints, and even though the U.S. Constitution forbids a religious test for government nominees, Sanders imposed one, anyway.

Does that mean Sanders would approve of torturing nuns to death? No, but Sanders self-identified with a political figure who did just that, and he also placed himself in solidarity with others, including Mao, Ho Chi Minh, Fidel Castro, and Che Guaevara who did order mass executions of people simply because they confessed the Christian faith.

One cannot separate the methods from the man. Trotsky understood that, and so did Stalin, Lenin, and Mao. No doubt, Sanders would say that torturing people to death is bad, but then he approved of the result: the establishment of a communist utopia where healthcare is free. But the result came about precisely because of the terror and murder that communist leaders imposed.

In my view, Sanders is a gutless liar. Watching his supporters destroy property, beat up political opponents, and resort to gun violence itself, one realizes that those who truly believe in Bernie Sanders better understand the implications of his political philosophy than he does. One wishes that Sanders would “come out of the closet” and admit that in order to impose his utopia, a lot of people must die violent deaths. I would admire that man much more than I admire the deceitful senator from Vermont.