The Most Libertarian President of My Lifetime

Let’s dispatch with the last question.  Average male life expectancy is something around 80 years; feel free to assume I am average.  So, let’s consider all presidents since Franklin Roosevelt as eligible candidates.

Ivan Eland has written a book, Recarving Rushmore.  He examines all presidents up to and including George W. Bush and ranks them according to peace, prosperity and liberty – good things to consider.  Eland places John Tyler and Grover Cleveland at the top of his list; mainstream sources cited by Eland offer George Washington, Abraham Lincoln, and Franklin Roosevelt.  Where Woodrow Wilson is last on Eland’s list, the mainstream sources have him in the top eleven.

“Wait a Minute!  What are you doing, bionic?  No president can be labeled ‘libertarian’!  Stay out of politics; you only encourage the crooks.”  I am most sympathetic to this view; sadly, politics doesn’t return the courtesy.  In any case, the title of this post precludes me from stopping here.  And “most” implies relative to others.

Of those in office during my “average” lifetime, Eland offers Jimmy Carter and Dwight Eisenhower at the top of the list; at the bottom: Harry Truman and George W. Bush.  As a reminder: Eland did not consider Obama (too recent at the time the book was written) or (obviously) Trump. 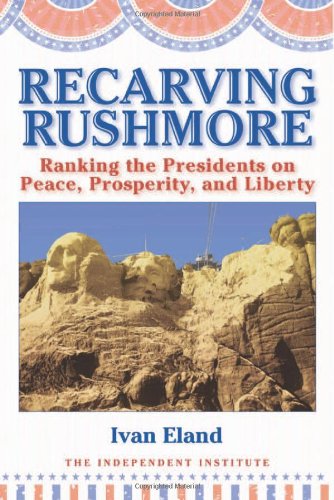 If you are looking for an analysis based on a president’s actions that pro-actively improved liberty, you won’t find it here; this isn’t my objective.  Eland did a thorough job of such an analysis and came up with Jimmy Carter; I find no reason to repeat his work.

My libertarian objective: to see fundamental change in the relationship between the government and the individual; this means meaningful change toward liberty and freedom, changes that are sustainable.

In the real world, this will be manifest in political decentralization: political power returned to lower, local levels; the disbanding of supra-national government functions; a multi-polar world.

Before getting to the most libertarian president in my lifetime – the one best able to deliver progress toward my objective – let’s explore some of the paths chosen by others:

Change Through Engagement in Politics

There are many libertarians who believe this is the proper method.  Hundreds of millions of dollars have been spent in this.  The beltway offers an environment for think tanks to offer libertarian (or, more specifically, make-government-more-efficient) policy prescriptions.

There is even a political party named “Libertarian.”  Whereas at one time the party was focused on education, it has long ago transformed to standard party politics: an objective of raising money and winning votes – focused on change through engagement in politics.

Elect the right president!  That’s the plan.  Consider: had Ron Paul won in 2008 or 2012, what successes toward liberty would he have had given congress and the media?  Little to none, as Paul himself offered.  You see what they are doing to Trump; magnify that ten-fold for Ron Paul.

Beyond educating the public, nothing about this approach is of value to me.  Has the government been reduced as a result of these efforts?  Fewer regulations?  Fewer wars and military interventions?  Less active central banking?  The answers to these questions are sufficient, I believe, to explain why this method holds no value to me.

A libertarian could offer that the president who does the least bad is the most libertarian.  With this in mind, I suspect William Henry Harrison, who survived all of 31 days in office, would easily be the winner.  For a similar reason, Jimmy Carter could make the cut (as he did on Eland’s list) – no major military actions, plenty of deregulation.

It is a good consideration, but it isn’t mine.  After all, “inaction” is only, at best, a temporary respite.  There is nothing long-lasting about inaction in office.  No fundamental change occurs.  Although I guess I shouldn’t completely discount Carter.  Where he deregulated, my liberty has increased.

Nothing that any president can do will be more beneficial toward achieving liberty than this – keep in mind, even a Ron Paul cannot accomplish much given the weight of the system against him.  The more division, divisiveness, anger, frustration, etc., the better; the bigger the laughingstock, the better.  I could write a few thousand more words about why, but I think it is better said by Etienne de la Boétie: people (foreign and domestic) will withdraw their consent.

Why will they withdraw consent?

And with this said, I suspect you know which president I would rank at the top of my list as the most libertarian president in my lifetime.  Yes, that’s right: Donald Trump.  His first 100-plus days have been exemplary in this regard.

We see, daily, events that demonstrate this withdrawal of consent: California is negotiating its own climate deals with foreign governments; European leaders are having dry heaves during Trump’s visit; a republican congressional candidate wins his election even after being charged with assault; sanctuary cities; the courts repeatedly win on immigration bans.

This is not only great entertainment – it is great for the long-term hopes for liberty.

Imagine if they figure out a way to kick Trump out of office before his four years are up.  Do you think the deplorables are angry now?  Talk about discrediting the government.

But What About the Bad Stuff?

Trump is not inactive.  He has said and done many things that a libertarian will hate.  In fact, I can only think of one significant thing he stated during the campaign that could be considered “libertarian”: why fight with Russia, we should talk to them.  I can think of one fewer such thing that he has put into meaningful action.

So why pick Trump?

In other words, all the bad stuff pretty much cancels out – this isn’t even worth a debate.  As long as every choice for this prize is chock-full of bad stuff, I would choose as winner the candidate who will most discredit the office and the government.

Life’s going to stink – as it relates to government stomping on my liberty.  Trump will do that.  Don’t expect me to say – “wow, how libertarian of him!”  I don’t praise his actions.  I praise what he represents; I praise the inevitable results.

If any libertarian out there has a better plan, I am all ears (or eyes, I guess).  But after spending hundreds of millions of dollars inside the beltway, after running watered down, even non-libertarian, candidates in the LP – what have you got?

Taking as a given the non-libertarian actions every president would take, as a libertarian I really couldn’t ask for more from a president than Trump is delivering.  And for this, I say Donald Trump is the most libertarian president in my lifetime.