Sebastian Mallaby is the Paul A. Volcker Senior Fellow for International Economic Relations at the Council on Foreign Relations. One can be sure, then, that his new comprehensive book, The Man Who Knew: The Life and Times of Alan Greenspan, reflects an Establishment point of view. As if this were not enough to tell us where the book is coming from, Mallaby informs us that he had Greenspan’s full cooperation in writing it. “This book is based on almost unlimited access to Alan Greenspan, his papers, and his colleagues and friends, all of whom were generous in their collaboration.

Though the book is hardly a panegyric to Greenspan, Mallaby views his subject with considerable favor. Nevertheless, the book contains ample material for a more severe verdict: Greenspan abandoned the free market convictions he effectively defended early in his career as an economist. To uphold economic truth was not the path to the power and influence Greenspan sought; and he readily adjusted his beliefs to fit with his ambitions.

Greenspan attached himself to Ayn Rand’s inner band of disciples; but his adherence to free-market economics did not stem from his alliance with Objectivism. Greenspan learned economic theory from Arthur Burns at Columbia University. For Greenspan, like his mentor Burns, statistics had primary importance: economic theory emerged from discerning patterns in the data and was strictly subordinate to its empirical sources. “Burns was the chief heir to Wesley Mitchell’s empiricist tradition, and his influence restrained any enthusiasm that Greenspan might have felt for the new trends that had begun to stir in economics. … Even the cleverest econometric calculation was limited because yesterday’s statistical relationships might break down tomorrow; by contrast, finer measures of what the economy is doing are more than just estimates — they are facts.” 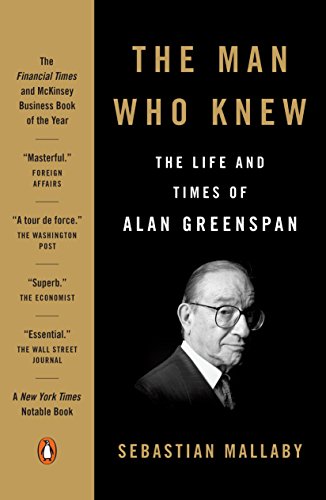 The Man Who Knew: The ... Sebastian Mallaby Check Amazon for Pricing.

From his studies of the data, Greenspan arrived at an important conclusion. Financial markets played a crucial role in the genesis of the business cycle: “Squarely confronting the notion that financial markets are merely a casino of meaningless side bets, he laid out an insight for which Nobel laureate James Tobin would later capture the credit. Stock prices drive corporate investments in fixed assets. … In turn, these investments drive many of the booms and busts in a capitalist economy.”

Greenspan applied his insight to Fed policy in a way that resembles the Austrian theory of the business cycle. During the 1920s, “the Fed’s key error was to underestimate its own contribution to the stock bubble. The rise in the market had set off a rise in investment and consumer spending, which in turn had boosted profits and stoked animal spirits, triggering a further rise in the stock market. The 1920s Fed had been the enabler of this feedback loop — in order for investment and consumer spending to take off, companies and consumers needed access to credit. Faced with a jump in the appetite to borrow, the Fed had [wrongly] decided ‘to meet the legitimate demands of business,’ as Greenspan put it.”

Greenspan drew from his analysis “a radical position: the United States should return to the gold standard of the nineteenth century. By tying money and credit to a fixed supply of gold, the nation could prevent toxic surges in purchasing power.” … “‘The pre-World War I gold standard prevented speculative “flights from reality” — with their disastrous consequences,’ “Greenspan insisted.”

Nor was this the only area where Greenspan adopted a radically free-market stance. Defying the mainstream, “Greenspan followed up with an attack on government efforts to rein in monopolies with antitrust laws. … He pointed out that it was not just corporate managers who would want to challenge monopolists; the financial system would demand that they do so. If a monopoly extracted fat rents from its customers, its share prices would soar; that would give entrepreneurs an incentive to create rivals to the monopoly, and it would give financiers an incentive to ply those rivals with abundant capital.” Mallaby views this “crude” view with evident distaste, noting that both Friedrich Hayek and Milton Friedman adopted a more “nuanced” position.

What then became of this free-market radical? Unfortunately, his desire for “power and pelf,” in Murray Rothbard’s phrase, led him to alter his views. A firm commitment to freedom would never gain him entry to the inner sanctum of government, and Greenspan soon learned to temper his views.

In his radical days, Greenspan had opposed government bailouts to failing firms: the discipline of failure was essential to the operation of the free market. In 1971, he defied his teacher Arthur Burns, who favored bailing out Lockheed. “Testifying before the Senate, Greenspan refused to back his mentor. ‘I am in fundamental disagreement with this type of loan guarantee,’ he began. Government-directed lending ‘must inevitably lead to subsidization of the least efficient firms,’ damaging productivity and therefore living standards. … What the economy really needed was for weak companies to go bust, so that capital and workers would move to better-run establishments.”

Once close to the levers of power, matters were different. He wished to become Paul Volcker’s successor as Fed chairman, and he knew that firm opposition to Fed policy would hurt his chances for the job. Going against his earlier analysis, he supported the “largest bank bailout in U.S. history,” the rescue in 1984 of the Continental Illinois National Bank. He admitted the dangers of the bailout, but it was, as Mallaby summarizes his position, “necessary and appalling.” Appalling, one suspects, because of its effects on the free market; but necessary to advance Greenspan’s career. By the time he became Fed Chairman, the transformation was complete. By 1989, his “libertarian rejection of bailouts was long gone; what he wanted above all was the space to fight inflation.”

Greenspan wanted to fight inflation; but the best way to do it was no longer acceptable. A gold standard, he had long ago recognized, would bring with it monetary stability; but to replace the Fed with a commodity standard not subject to control by the government would erode his power. Accordingly the gold standard had to go.

Greenspan in his long career as Fed chairman gained the power and acclaim he coveted; but the crash of 2008, two years after the end of his tenure in office, led to a sharp decline in his reputation.

In their attitude toward compromise, Greenspan is the polar opposite to Murray Rothbard. Rothbard could have tailored his views to win the favor of Arthur Burns, who was a family friend, but he refused to do so. He never abandoned his principles, and he took the measure of Greenspan. Writing about him in 1987, Rothbard observed: “Greenspan’s real qualification is that he can be trusted never to rock the establishment’s boat. He has long positioned himself in the very middle of the economic spectrum. He is, like most other long-time Republican economists, a conservative Keynesian, which in these days is almost indistinguishable from the liberal Keynesians in the Democratic camp.”

In looking over Greenspan’s fall from free-market grace, the melancholy first lines of Browning’s The Lost Leader, addressed to Wordsworth, come to mind: “Just for a handful of silver he left us,/Just for a ribbon to stick in his coat. …”

Is the FBI Spying on Ron Paul?Perversion of Prayer