The Stench Inside The Fed

Review of Fed Up

The Trump rally has stocks at all-time highs. The VIX (which reflects the volatility of the S&P 500) is at 10-year lows. The headline unemployment rate is 4.8%. Everything must be A-OK in the U.S of A.

Head Keynesian Janet Yellen, the Fed’s Chair, may be sleeping soundly, as she and her Ph.D. monetary mandarins continue to gin up a robust wealth effect.  At 70 years old, described by Danielle DiMartino Booth as “Bernanke in lipstick and a skirt,” Yellen is far from retired, pulling down $201,700 per year to push the buttons and pull the chains of monetary policy.

The typical retiree, however, not so ably employed as Ms. Yellen and not wanting to play in Wall Street’s big casino to provide sustenance in their golden years, are suffering under the Federal Reserve’s financial repression.

Ms. DiMartino Booth provides us the book we’ve been waiting for: a view from inside America’s central bank which doesn’t paint the Ph.D. army as heroic for the simple skill of money creation. “An insider’s unflinching exposé of the toxic culture within the Federal Reserve,” says Amazon where all 17 reviews so far are 5 stars. 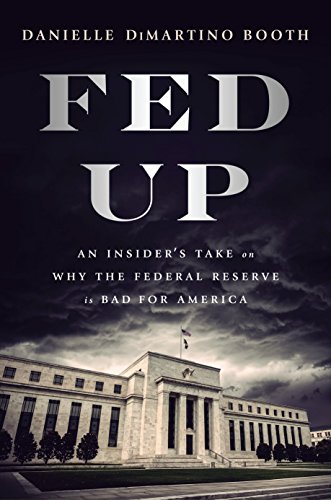 Yes, the author has written a dandy book chronicling her jump from Wall Street to financial columnist and then her career serving at the Dallas Federal Reserve under governor Richard Fischer. DiMartino Booth is not a Ph.D. and neither is Fischer, so those two relied on actual market data to determine what the economy was doing as the housing market boomed then busted. What a concept. However, in a Ph.D. la-la land she was either criticized or ignored for using actual data that wasn’t seasonally adjusted or manipulated in some other way to make the real economist’s benzentine formulas work out.

The Ph.D.’s looked down their pointy noses at Fischer and DiMartino Booth, at the same time both were well respected on the Street for their good sense. Meanwhile, as the market melted down Greenspan, Bernanke and Yellen did their best Sergeant Schultz impression, “I see nothing!”

Yellen would eventually admit, “I did not see and did not appreciate what the risks were with securitization, the credit rating agencies, the shadow banking system, the SIVs–I didn’t see any of that coming until it happened.”

Yellen was so blind to what was happening that, as DiMartino Booth relates, the San Francisco Fed, led by Ms. Yellen, was offering loans to Indymac in 2008 as the huge thrift was circling the drain. Even the Office of Thrift Supervision (OTS), not known as the toughest of regulators, had downgraded the California institution.

Besides Fed head and Ph.D. bashing, which the author excels at, the most important chapter in Fed Up is Chapter 11 entitled “Slapped in the Face by the Invisible Hand.” This is when Zoltan Pozsar appears. Pozsar is an another non-PhD who authored a paper “The Rise and Fall of the Shadow Banking System.”

As DiMartino Booth explains, it was the shadow banking system that caused the ‘08 meltdown. PIMCO’s Paul McCulley actually coined the phrase describing, “the whole alphabet soup of levered up non-bank investment conduits, vehicles, and structures.”

All this off-balance sheet (OBS) maneuvering was driven by the 1988 Basel I Accord.  Basel, I required banks to de-lever, so, assets and liabilities needed to be hidden. “Financial firms began to employ entities called structured investment vehicles (SIV) and conduits to hold

these assets OBS,” writes DiMartino Booth. As the housing market boomed, mortgages of increasingly dubious quality were the assets these instruments contained.

Nobody at the Fed, and very few anywhere else understood shadow banking. Simple fractionalized banking, as explained by Murray Rothbard in The Mystery of Banking is hard enough.  Shadow banking adds to the complexity exponentially.

All of these OBS were levered from 15 to 1, or in some cases to infinity.  The need for more products was met with enterprising investment bankers creating a massive supply of synthetic CDOs.  This alphabet soap was connected to the repo system (overnight loans to and from banks and large corporations), the grease that allows the cogs in the banking system machine to operate.

Of course, for those who have read or watched “The Big Short” the way to bet “don’t pass” at this huge craps game was with credit default swaps.

In the dark room that was (and is) the shadow banking system there is no information. Assets are pledged multiple times (or to use fancy words: hypothecated and re-hypothecated). The author’s example of Barney making a loan and Aunt Mabel’s car is elegant and brilliant.

So how big and complex is the shadow banking system? “Zoltan sent me a huge four-by-three-foot laminated color copy of his [shadow banking] diagram in a tube,” DiMartino Booth writes. “Even at that size, which took up half my office wall at the Fed, it was hard to read the tiny fonts on various pieces of the puzzle.”

Chapter 11, by itself, is worth the price of the book and should be read multiple times to understand what happened in 2008.  So Dodd-Frank probably cleaned up all this mess, right?  Not hardly.  The Economist reports, “The Financial Stability Board, an international watchdog estimates that globally, the informal lending sector serviced assets worth $80 trillion in 2014 up from $26 trillion more than a decade earlier.”  So the next crash will be that much larger.

With a title like Fed Up the reader might think DiMartino Booth wants to throw in with Ron Paul and his book End the Fed.  Sadly, no. Our heroine was bothered by protesting retirees outside her window and thought “Damn Ron Paul” and his book, she writes. “America is not a banana republic. It needs a strong and independent central bank.”

Well, with all due respect Ms. DiMartino Booth, the evidence is in your book. A government with a central bank expanding its balance sheet by five and a half times and refusing to shrink it, perverting capital markets with zero to near zero interest rates for nearly a decade, and enabling the national debt to soar to $20 trillion, is, in fact, a banana republic.