John Adams championed the new Constitution precisely because it would not create a democracy, as he knew a democracy “soon wastes, exhausts, and murders itself.” Their herculean efforts, sacrifices, and bloodshed have been for naught as we allowed our republic to devolve into a democracy and ultimately into our current corporate fascist warfare/welfare surveillance state. Sadly, we were unable to keep the republic Franklin and his fellow revolutionaries gave us.

“From the errors of other nations, let us learn wisdom.” – Thomas Paine, Common Sense

Some might contend Paine’s Common Sense arguments against a despotic monarchy two and a half centuries ago, with an audience of two and a half million colonists, couldn’t be pertinent today in a divided nation of 325 million people. But when you examine the events, actions, and catalysts inspiring Paine to pen Common Sense, you see the parallels with the events, decisions, and facilitators of our current Crisis.

For more than a decade before the eruption of open hostilities, tensions had been building between colonists and the British authorities. An overbearing far-flung British Empire began to pillage the colonies to pay for their corrupt kingdom by shaking them down through the Stamp Act of 1765, the Quartering Act of 1765, the Townshend Tariffs of 1767 and the Tea Act of 1773. 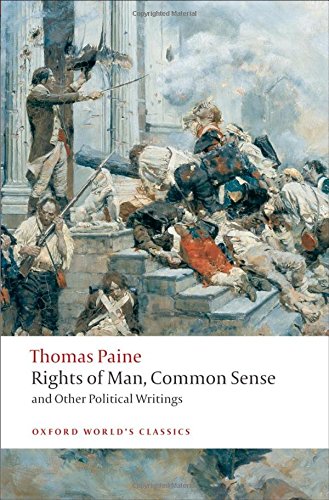 This taxation without representation was met with passionate protest among many colonists, who resented their lack of representation in Parliament and demanded the same rights as other British subjects. These demands were met with arrogant indifference by the monarchy and a haughty parliament. Forcing colonists to feed and house the very soldiers who were being paid with their taxes to repress them was the ultimate insult.

Initially, the colonists just fumed at the domineering disrespect shown them by the British ruling establishment. The pillaging of their hard earned wealth by distant oppressors prompted the colonists to initially organize nonviolent resistance and embargoing British luxury goods. As anger against their authoritarian overseers boiled over, the British cracked down harder in their version of a colonial surveillance state. Colonial resistance eventually led to bloodshed in 1770, when British soldiers opened fire on a mob of colonists, killing five men in what became known as the Boston Massacre.

Parliament eventually backed down and repealed all of the duties except for one symbolic duty on tea. In December 1773 the Samuel Adams inspired Sons of Liberty, dressed as Mohawk Indians, boarded British ships and dumped 342 chests of tea into Boston Harbor. An outraged Parliament passed a series of measures known as the Intolerable or Coercive Acts, designed to reassert imperial authority in Massachusetts. In response, a group of colonial delegates (including George Washington of Virginia, John and Samuel Adams of Massachusetts, Patrick Henry of Virginia and John Jay of New York) met in Philadelphia in September 1774 to give voice to their grievances against the British crown.

This First Continental Congress did not mandate liberation from Britain, but it denounced taxation without representation, maintenance of the British army in the colonies without their consent, and issued a declaration of the rights due to every citizen, including life, liberty, property, assembly and trial by jury. The Continental Congress voted to meet again in May 1775 to consider further action, but before it convened again Paul Revere made his fateful ride and local militiamen fired the first shots of the Revolutionary War at Lexington & Concord. These events set in motion Paine’s call to arms and the Declaration of Independence shortly thereafter.

The First American Revolution was the result of at least a decade of government overreach, excessive taxation, disregard for the rights of citizens, elitist arrogance of empire builders, and thuggish intimidation of colonists by the British military. The Americans, most of whom had been born on American soil, felt only vague allegiance to a monarchy across the seas imposing their iron fist of taxation and intimidation upon citizens and their means of livelihood.

There had been growing discontent for decades and the Boston Tea Party catalyst triggered a dramatic change in the colonial mood. The chain reactions happened rapidly thereafter and there was no turning back. Paine realized independence was the only true option and proceeded to inspire that result with his Common Sense pamphlets.

“Until an independence is declared the continent will feel itself like a man who continues putting off some unpleasant business from day to day, yet knows it must be done, hates to set about it, wishes it over, and is continually haunted with the thoughts of its necessity.” – Thomas Paine, Common Sense

With this potent image, Paine concluded Common Sense. This illustration captured Paine’s central point throughout the pamphlets that America must break away from Britain. The only question that remained was when the colonies were to become free. Paine believed the time for action was now rather than later and exhorted his fellow Americans to rise to arms and vanquish their British oppressors.

The moment for transformation had come. It was time for the American people to take back their country from an overbearing, corrupt, evil establishment. The Crisis had reached its regeneracy with Paine’s Common Sense and Jefferson’s Declaration of Independence, two of the most important documents in America history.

Society is a Blessing/Government a Necessary Evil

“Society in every state is a blessing, but government even in its best state is but a necessary evil; in its worst state an intolerable one; for when we suffer or are exposed to the same miseries by a government, which we might expect in a country without government, our calamity is heightened by reflecting that we furnish the means by which we suffer…” – Thomas Paine, Common Sense

If you are blind to the parallels with our current position in this Fourth Turning, you are either wallowing in willful ignorance or you are a functionary within the debased establishment. One of Paine’s main themes was society was a blessing while the government was, at best, a necessary evil.

Paine believed in the power of the people. Society constitutes everything constructive people create through working together. The creation of businesses, inventions, scientific discoveries, art, and literature has never required government. Collaboration among individuals brings about positive outcomes and the advancement of society. People transact business, cooperate, follow societal norms, and live their lives on a daily basis with absolutely no intervention or oversight from an oppressive threatening government entity.

Human beings are fallible creatures with a weakness for the vices of greed, envy, lust, pride and a few others. The only true purpose of government is the protection of life, liberty, and property. Paine presented government as an organization whose lone function was to inhibit the wickedness in man.

Government’s fundamental purpose is to provide security from foreign invaders and ensure property rights are protected. The success of a government should be judged by the extent to which it fulfills these roles. Society is a force which promotes our happiness positively, while the government is a coercive force, which at best has a neutral impact on our lives and at its worse, hampers our lives through coercion.

Paine believed the British monarchy had too much power over the lives of the colonists. The hereditary succession of the monarchy led to the elevation of asset to the throne while pretending he was a lion. King George III was just such an ass.

The purposeful complexity of the British system of government was designed to centralize power in the hands of the few, unlawfully and unjustifiably seizing control from the people. A government should be judged on whether it improves society or makes it worse. If the government does not represent the will of the people then it needs to be discarded or overthrown. The larger the government bureaucracy, the more disordered its decision making, and more likely corruption, tyranny, and taxation will burden the citizens.

Paine scoffed at the absurdity of branches of government checking each other. Once entrenched in power the aristocratic civil servants only served themselves and their financial benefactors. The happiness and well-being of the people was not their concern. Every government, even if its initial design had a noble purpose, devolves into a fetid swamp of control freaks, the tyrannical power hungry, egomaniacal sociopaths, and feckless apparatchiks. It becomes a bane and punisher of the people. “Society is produced by our wants, and government by wickedness; the former promotes our happiness positively by uniting our affections, the latter negatively by restraining our vices. The one encourages intercourse, the other creates distinctions. The first is a patron, the last a punisher.” – Thomas Paine, Common Sense