A Masterpiece of Biography and a Mesmerizing Detective Story

Program Note: Lew has interviewed author Peter Janney for the podcast which will be on LRC this weekend, 11/19-20.

“Mary’s Mosaic” is several things at once: an insightful and sensitive biography of both Mary Meyer and her one-time husband, CIA propaganda specialist Cord Meyer; a murder mystery; a trial drama; an expose of secret knowledge and cover-ups inside the Washington D.C. Beltway during the 1950s and 1960s; and of course, a love story about the late-developing relationship between President John F. Kennedy and Mary Pinchot Meyer, whom he had first met at an Ivy League prep school dance when she was only 15 years old. Their paths had crossed briefly once again in the Spring of 1945, at the founding conference of the United Nations in San Francisco. (Mary, her new husband Cord Meyer, and John F. Kennedy all attended the conference as journalists reporting on the events there, at the birth of the United Nations.)

One of the fascinating aspects of this well-researched book is how it traces the evolution and personal development of Mary Pinchot Meyer, Cord Meyer, and John F. Kennedy. As Cord Meyer—a scarred war hero who was once an idealist and a pacifist, and who aggressively lobbied for a united world government following World War II—became a disillusioned cynic and was subverted to the “dark side” by Allen Dulles of the CIA, his all-consuming commitment to the Cold War (and his abandonment of his former idealism) slowly killed his marriage to Mary Pinchot. Mary remained an idealist and an independent thinker, and it was this very independent and unconventional woman whose orbit finally intersected with that of President John F. Kennedy again late in 1961, about two years before his assassination. 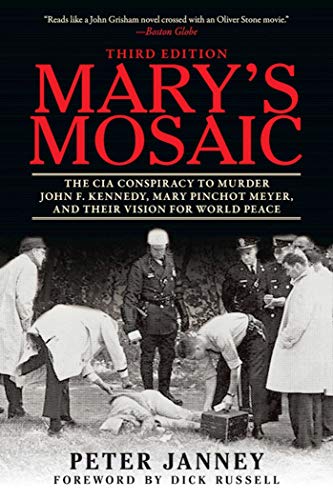 Janney convincingly documents how their relationship became much more than a series of mere sexual trysts—it became a personal and political alliance of two people who had become thoroughly convinced of the insanity of war between nation states in the Nuclear Age, and who were both determined to do something about it. Jack Kennedy, already sickened by war and skeptical about the wisdom of senior military officers because of his World War II experiences, had become even more skeptical about the desire of many to seek simplistic, military solutions to complex international problems following the bad advice he received from the Joint Chiefs of Staff about the Bay of Pigs and Laos in 1961. After the searing crucible of the Cuban Missile Crisis in the fall of 1962, JFK embarked upon a program of moral action not only in civil rights but undertook bold efforts to begin to end the Cold War; to commence a withdrawal from Vietnam which would have been completed by the end of 1965; and behind the backs of the Pentagon and the CIA, embarked upon what he thought was a clandestine rapprochement with Fidel Castro’s Cuba. Mary Pinchot Meyer, who had ever been critical and distrustful of the CIA, became a natural ally of President Kennedy’s throughout 1963 as he moved to curb the unbridled power of the Agency and defuse the Cold War. (She was present at the “Peace Speech” at American University on June 10, 1963, and Jackie Kennedy was not.) One of Janney’s most convincing sources about the nature of the relationship between Mary Meyer and Jack Kennedy was an extremely well-placed official with intimate knowledge of JFK’s daily activities and thinking: Kennedy’s Presidential Appointments Secretary, Kenneth O’Donnell. Janney used O’Donnell’s oral history interview with the late author Leo Damore, recorded years ago shortly before O’Donnell’s death, as one of the foundations for his book.

For those who revel in study of the Cold War culture in Washington in this era, the book is full of well-documented revelations about Phil and Katherine Graham of the Washington Post; James Jesus Angleton (the Head of CIA Counterintelligence), who was godfather to the children of Cord and Mary Meyer; and Ben Bradlee, editor of the Washington Post during the Watergate era (who is exposed in the book as one of the CIA’s major media assets). In my view, knowing that Bradlee was in the CIA’s pocket helps explain why the Washington Post was so successful in taking down Richard Nixon following the Watergate break-in. Nixon had used his Chief of Staff, Haldemann, to attempt to get the CIA to “warn off” the FBI in its investigation of the Watergate break-in and the “plumbers.” Nixon instructed Haldeman to threaten the CIA (Richard Helms) with exposure of its involvement in the JFK

assassination, as an incentive for the Agency to cooperate with him. This “hardball” leverage failed, and Bradlee was allowed (and perhaps encouraged) to take down Nixon. He acted as the CIA wished in the Watergate matter. Unaccountably, Bradlee never employed the considerable investigative resources of the Post to look into the Kennedy assassination…well, perhaps that is not so “unaccountable” after all, now that we know he had been a CIA asset since the early 1950s, a part of the Agency’s remarkably successful penetration and control of foreign and domestic media. As Janney reveals, Cord Meyer (Mary’s husband from 1945 until the late 1950s) was in charge of that CIA program of media penetration and propaganda, and Ben Bradlee was married to Mary Pinchot’s sister, Toni. The proximity of these relationships—between Cord Meyer, James Angleton, and Bradlee—make it easy to believe that Bradlee’s links with the CIA, that began in the early 1950s, continued into the 1960s and early 1970s when he was in powerful positions at Newsweek and the Washington Post.

Peter Janney’s own father, a World War II Naval aviator and a recipient of the Navy Cross, was also a CIA man, and Peter grew up amidst the CIA culture in Washington. Mary Meyer’s son Michael was his best childhood friend. He knew Mary Meyer as his best friend’s mother. He was therefore perfectly placed to write this book, for his own family had frequent social contacts with Cord and Mary Meyer, James Angleton, Richard Helms, Tracy Barnes, Desmond FitzGerald, and William Colby. Janney’s knowledge of the CIA Cold War culture in our nation’s capital in the 1950s and 1960s is very well-informed, on a personal level.

Janney compellingly relates how the D.C. metropolitan police and the U.S. Justice Department attempted to railroad an innocent black man, Ray Crump, for the mysterious murder of Mary Meyer in October of 1964, just three weeks after the Warren Report was issued. Due to the heroic efforts of African American female attorney Dovey Roundtree, Janney explains how against all odds, Crump was acquitted. Peter Janney reveals the likely motive for her murder—she was about to publicly oppose the sham conclusions of the Warren Report as a fraud. Furthermore, she had kept a private diary which presumably recorded details of her relationship with President Kennedy (and perhaps even of affairs of state). In October of 1964, she was literally “the woman who knew too much.” This book reveals the numerous lies and falsehoods told about her diary (and its disposition) by Ben Bradlee, James Jesus

Angleton, and others, in a way not adequately covered by previous articles and books. The media in this country, misled by the CIA and by former acquaintances of Meyer’s who had much to hide, has consistently distorted the true story of what likely happened to her diary, and Peter Janney lays all of this out in a way that anyone can understand.

Peter Janney also solves the mystery of her murder 48 years ago, in as convincing a fashion as one can, so many years later. Many have asked, “If Ray Crump did not kill Mary Meyer, then who did?” This book answers that question. (I will not provide any spoilers here.)

So purchase a copy of this book today. Extensively footnoted and persuasively written, it is the best account in print about the life and death of Mary Meyer, easily eclipsing the sole biography previously written about her by Nina Burleigh. Peter Janney has courageously finished the investigative journey into her life and death begun by the late Leo Damore, and briefly resumed (and then abandoned) by John H. Davis. “Mary’s Mosaic” is part film noir thriller, part biography, and also provides a remarkably frank view of the Cold War culture in Washington, and the dark side of the national security state. It belongs on the bookshelf of every Cold War historian, and everyone who is interested in President Kennedy’s assassination.