The Fallacies of Bernie Sanders

Where Bernie Went Wrong: And Why His Remedies Will Just Make Crony Capitalism Worse. By Hunter Lewis.  Axios Press, 2016. 284 pages.

Hunter Lewis has rendered a great service with his new book. Writing from an Austrian perspective, he has given us the definitive analysis of the Bernie Sanders phenomenon. Though Sanders did not win the Democratic nomination, he accomplished something remarkable. “If Bernie’s campaign was primarily an exercise in moving public opinion, it was wildly successful. He carried young people by wide margins. He shifted the Democratic Party and eventually its platform in his direction.” (p.1)

How did he do this? “Bernie often says out loud what others are privately thinking.” (p.13) The middle class and the poor are not doing well, he says; and the fault lies in a “rigged’ system.  “The economy becomes rigged because of the rich, primarily represented by ‘greedy’ billionaires and corporations, use their wealth to subvert the political process and take command of the government.” (p.24) 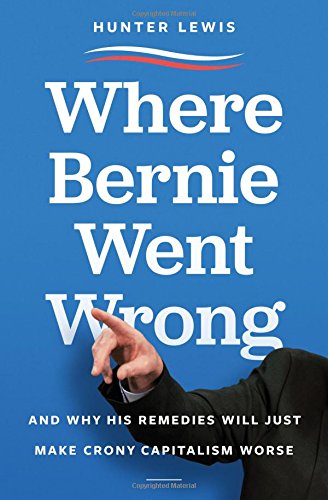 Lewis finds much truth in Sanders’s accusation.  In a manifestly corrupt way, for example, failed banks and businesses were “bailed out” after the financial crash of 2008. “[Hank] Paulson, former CEO of Goldman Sachs, was one of the architects of the Wall Street bailout of 2008 which not only rescued Wall Street but also rescued his own firm, along with all the shares he still retained in that firm.” (p.132)

If Sanders has correctly identified a major problem, his proposed solution to it would only make matters worse; and in Lewis’s careful pressing home of this claim against Sanders lies the principal contribution of his book.

Sanders wants to end the rigged system by, among other measures,  increasing government control over corporations and redistributing income and wealth  from the rich to the poor. In these proposals, he overlooks a vital distinction; and this vitiates the rationale for what he suggests.  Sanders blames capitalism for the rigged system, but what we have today is not a free market economy but rather “crony capitalism.” “It does not seem so much a capitalist system  in the United States as a crony capitalism in which individuals get rich, not by supplying good products and services at the lowest possible cost for consumers, but rather by getting monopoly protections or other favors from government or by otherwise benefiting from government actions or connections.” (pp.24-25)

By neglecting to distinguish crony capitalism from genuine capitalism, Sanders is led to propose “cures” that would only intensify the disease he diagnoses. “Bernie proposes to solve the problem of political corruption and a rigged economy by giving government, even more, power. How will this help? Surely an expanded and even more powerful government, ever more deeply involved in running the economy, will become an even more tempting target for the wealthy subverters?” (p.26)

Lewis finds another flaw in Sanders’s account of the economy. Though he claims to oppose powerful interest groups that rig the economy to their advantage, he makes an exception. Labor unions, in his eyes, can do no wrong. ”In Bernie’s world view, unions not only help union members: they help everyone. . . He also takes whatever money he can get from them and in return they can count on him to support their government agenda.” (p.38)

The cure for a malign alliance between government and business lies in less government, not more.  The way to aid workers is to increase capital investment; and this is best accomplished if investors are freed from high taxes and burdensome regulations. “Productivity increases as we give workers better tools. In order to afford these tools, we need to put away some of what we make each year. That is, we need to save so that we can invest the savings in the tools we need. The problem then arises: how to induce people to save?. . .[The poor and middle class cannot be expected to save a great deal.] The rich, however, are different. They have so much money that, in aggregate, they simply cannot spend it all. They are, in effect, forced to save.” (p. 59)

Sanders in his campaign talked often of international trade, and here again he missed the mark. He rightly protested against trade pacts like NAFTA and the proposed TPP that subject us to increased government regulation, but he did not see what is wrong with these pacts. “Genuine free trade stands in the same relationship to the massive trade agreements of recent years that capitalism stands to crony capitalism. These are opposing categories. Just as free trade is an aspect of capitalism, trade agreements are generally an aspect of crony capitalism.” (p.126)

Sanders wishes to restrict international trade in order to “bring back American jobs;” but this course of action is futile. Free trade increases prosperity and employment. “The preservation or protection of jobs is a dead-end policy. . . The most economically thriving US regions tend to have the greatest annual job loss, but also the greatest job creation, with a net gain in both employment and wages. Job turnover can be hard on employees, especially older ones, but it is essential for job growth, economic growth, and an improving standard of living.” (p.129)

Lewis turns to the Fed, and again Sanders is “weighed in the balance and found wanting.” Sanders joins Ron Paul in calling for an audit of the Fed, and he is wary of the machinations of big banks; but he does not see through to the essence. He calls for increased bank credit expansion to rescue us from the economic doldrums.  It is just this course of action that led to the present bad conditions. “Bernie voted for Congressman Ron Paul’s Audit the Fed bill,. .. but he clearly does not agree with Paul’s proposal to abolish the agency, nor does he seem to agree with Paul that the Fed has created too much money and credit and in the process condemned the US economy, and especially its vulnerable poor or middle class citizens, to an endless cycle of ever widening bubbles and busts. When the Fed began talking about finally increasing interest rates after keeping them near zero since 2008, Bernie opposed this step, even though the new Fed money is provided first to Wall Street at giveaway rates.” (pp.151-152)

If one places side-by-side the programs of Bernie Sanders and Ron Paul, one sees the difference between a false prophet, peddling his siren song of socialism, and a wise and far-seeing statesman.  Hunter Lewis  deserves great praise for his trenchant dissection of Sanders and for pointing the way to the truth.

Previous article by David Gordon: The Philosophy of Gun Control

Hey, WaPo and the Rest of the Smearbund The Empire’s War on ‘Terror’