An interesting story about a purported “Hillary Double” is now bouncing around the internet, even though it has not yet broken through the “glass ceiling” that covers the Mainstream Media (MSM), except for a few places where it is mentioned in hushed tones, as yet another “conspiracy theory.”

In the latest case of a politician with a  body double (there have been rumors of others, besides those of Hillary Clinton and Lyndon Johnson), the rumor suggests that Clinton has had a decades-long association with a lookalike named Teresa Barnwell.  The photos below were published at the website Viral Liberty today:[i] 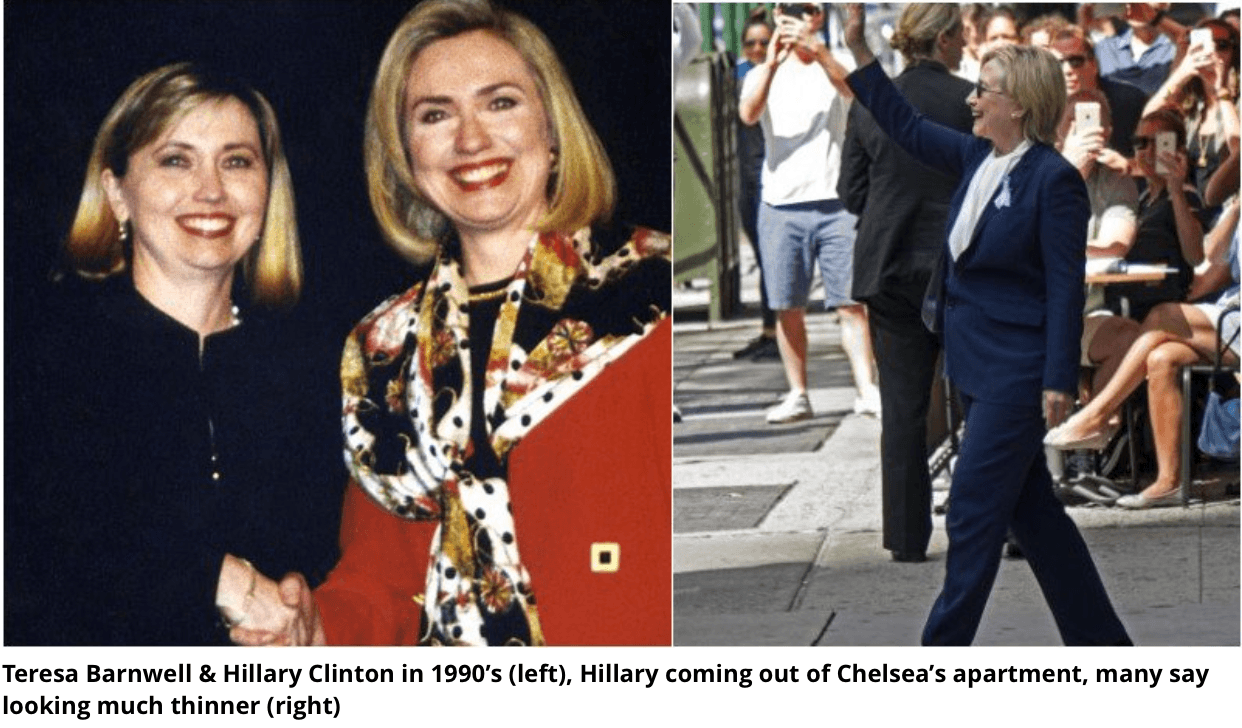 The accompanying report notes the fact that when Mrs. Clinton left the event at the 9/11 memorial ceremony she collapsed and had to be lifted by several of her attendants into her van.  Clearly, that vehicle is specially equipped to accommodate her needs and is never very far away from where she is.  After it drove off, instead of taking the obviously very ill candidate to a hospital, it turned out that less than an hour later, she emerged from her daughter Chelsea’s apartment building looking as “fit as a fiddle.”  Still another rumor has it that Chelsea’s apartment includes a special room that is equipped just for her mother’s needs: A standard hospital room, with the bed and all the other related medical appliances one might find in a hospital.

What gives the story “legs” (no pun intended) is that when Hillary did emerge from the apartment building, she seemed to have lost about 20 pounds in the process and had apparently even changed her earrings, even though she seemed to be wearing the same clothes as she previously had worn at the ceremony.  But another interesting point was observed which also makes the entire vignette quite a bit more enigmatic:  She was alone, not one Secret Service agent or the large black man in suit and tie who is usually always at her side, carrying something that looks a lot like a medical device even though her campaign says it’s only a flashlight  (But why is he always carrying it in the daylight)?   And worse, she wanders out to the sidewalk and proceeds to hug a young girl, even though she was just diagnosed with contagious pneumonia!   As America is temporarily “relieved” to see the candidate recuperate almost instantly to what had seemed to be a severe, life-threatening medical emergency, the cloak of concern simply morphs into one of astonishment.  Not to the wonders of modern medical treatments that could work so immediately, but to the question of what is truth, contrasted with what is possibly related to the worlds of sorcery and black magic: A product not of medical technology, but that of the world of ages-old gypsies and grifters: It’s known colloquially as “blue smoke and mirrors.”

It is just possible that Mrs. Clinton learned a thing or two from one of her known-to-be favorite past presidents, one who practically invented that kind of shell-game magic, the art of getting people to watch Scene “A” when the dirty work was going on at Scene “B”: The 36th POTUS, Lyndon B Johnson.

Lyndon’s second-cousin, J. Bert Peck, had a close resemblance to Johnson and a voice that sounded like him.  Peck’s primary employment was as a deputy sheriff in Garland, Texas outside of Dallas; he also worked part-time as security for the Dallas Cowboys. But in his spare time, he was also employed by Lyndon Johnson in a, mostly still-secret, role as Lyndon Johnson’s double.  Unfortunately, in Johnson’s last year as president, Peck did some things that apparently greatly embarrassed Johnson.  As often happened when someone did something to embarrass LBJ, Mr. Peck died shortly afterward, in his case by being shot in his own house by an intruder.

It all started when a news item appeared in two national magazines announcing that Lyndon Johnson had a “double,” a man who was known to have “stood-in” for Johnson on a number of occasions when Johnson wanted his presence known to have “existed,” even though he needed to be someplace else at that point in time. Peck made the mistake of making his role “public” when he appeared on Johnny

Carson’s “Tonight” show to talk about his experiences as LBJ’s “double,” and again when he appeared in the 1968 movie “The Wrecking Crew” starring Dean Martin, Elke Sommer, and Sharon Tate.  Peck appeared in two scenes playing “the president.”  One of them was taken from the back and right side as he, playing LBJ, was told about some stolen gold bullion; the second scene showed him dancing with Elke Sommer. The fact that these scenes were originally in the movie, as noted by the news articles and Peck’s obituary (described below), but were mostly deleted at some later point, suggests that Johnson did not want it known that he had a “double” to the public, at least in such a record that might become permanent, like a movie.

According to LBJ’s partner-in-crime, Billie Sol Estes (who was considered credible by the impeccably credentialed Texas Ranger — later U.S. Marshal — Clint Peoples), Johnson had Peck “stand in” for him on several occasions, including the evening of November 21, 1963, so he could go to Clint Murchison’s party at which the final “go” nod for the assassination would be given by LBJ.  He knew that Peck would only make a brief appearance at the hotel in Fort Worth to throw off reporters as to his whereabouts. The reports that Johnson was seen that evening in the main dining room and lobby of the hotel could be explained by this device, considering that there were no indications that he spoke to any group or even to anyone, in particular, that evening.   The following article, which validates the point about J. Bert Peck’s known role as an “LBJ Stand-in,” appeared in the “People” section of Time magazine, in the edition dated August 2, 1968:

Dean Martin and Elke Sommer have locked up star billing . . . in Columbia’s new Matt Helm thriller. Yet one supporting role is sure to set the audience buzzing. That’s when an aide informs the President that thieves have made off with $1 billion in gold bullion. And there’s old L.B.J. listening to the bad news. Old who? Well, it’s not quite the boss himself, folks. It’s his cousin. To play the President, Central Casting tapped J. B. Peck, 66, retired  [ Dallas County deputy] sheriff of Garland, Texas, and L.B.J.’s somewhat look-alike first cousin (Sic – Second Cousin). It’s just a flash in his pan, and J.B. got a kick out of it all.

And the same week, the following excerpt came from an article in “Newsweek” magazine dated August 5, 1968:

“It was a tossup as to who revealed a fascinating profile when they posed together – actress Elke Sommer or a tall Texan who is making his movie debut with Elke and Dean Martin in ‘The Wrecking Crew’. The neophyte looks uncannily like LYNDON JOHNSON and is cast in a brief $1,000 role as an unnamed President of the United States.  He plays just one scene, swiveling from back to front in a Presidential chair to jolt the audience with his seemingly familiar features.  Who is he? A Dallas night watchman and sometime songwriter (“Pedernales River”) named J. B. Peck, 66, that’s who.  “My mother was a Johnson and I’m Lyndon’s second cousin,” he said, but the relationship was news to the White House.”(emphasis added).

Before the movie was released, a revision was made so that only the rear of his head was shown (i.e. the part of the sentence from this magazine article, “swiveling from back to front” is no longer true).  You can view this video (what remains of it anyway) for yourself on the internet at “www.DailyMotion.com.”

Billie Sol Estes stated that Johnson had become paranoid about Peck’s ability to keep quiet as a result of this publicity, and that was what caused him to order his murder.  All of which begs the questions, “Who would have had the power to delete that footage, and change the movie description to delete all references to the ‘presidential’ scenes and change the credits to list only ‘J. B. Pick’ (instead of ‘Peck’) and, instead of listing his character name (LBJ), it is only listed as “uncredited.”  One must carefully ponder this question and consider the implications, as part of this exercise in deductive reasoning:  Is it possible that LBJ picked up the telephone and called Jack Valenti one day in August 1968 and asked (or, more likely, ordered) him to have those changes made to the movie?  After all, it was precisely for this kind of purpose that Johnson had gotten his Hollywood friend Lew Wasserman to appoint Valenti to his position as head of the Motion Picture Association of America.  How else could these obviously telling yet an otherwise innocuous set of changes get made, and by whose order?

To better understand the implications of all of this, one need only ponder these points: “WHY did all of this make LBJ so nervous?  Was he afraid that knowledge of his cousin’s sideline of acting as Johnson’s double might cause future researchers-cum-historians (i.e. those who endeavor to report real history instead of repeating the many LBJ-planted myths) to discover more of his secrets that might unravel the real truths of JFK’s assassination?”  And then ask yourself this question: Who else, other than Jack Valenti, LBJ’s appointed Hollywood

watchdog, might have had the power to do these things?   The only realistic answer to that question is:  “No one” (other than Wasserman himself, who would do anything to accommodate his friend the president, knowing that back-scratching is a two person exercise).

A few months later, LBJ’s cousin J. B. Peck was murdered (according to researchers who have studied the numerous anomalies related to his death).  I have presented compelling circumstantial evidence that this is one of several such crimes committed by the murderous mortician John Liggett  (though Liggett was never charged because Peck’s death was ruled a “suicide”).  But it is not speculative whatsoever that, three years after that, Liggett returned to the same house and tried to kill Peck’s wife; unfortunately for him, she survived and reported the attack, and the attacker, to police.  After he was arrested, Liggett was given the keys to his handcuffs while being transferred to a court for a hearing and of course he attempted to escape; as if “on queue” he was quickly shot in the back and killed by a sheriff’s deputy.

Much, much more detailed information about this and other related stories are contained in my book “LBJ: From Mastermind to The Colossus,“ available at book dealers and internet stores like Amazon, Books-a-Million and Barnes and Noble.  To order, a signed copy of this book sends an email to LBJ.Colossus@Outlook.com.

The Science of PersuasionWhy Mises and Not Hayek?