The Six Presidents Causing US Bankruptcy

Since Reagan came to power in 1981, the US has had a total of five presidents who have spent ever increasing amounts of money to hang on to power and buy votes. This has resulted in the most extraordinary money printing venture in history. It is not just central banks that print money. Governments that borrow vast amounts of money are also performing a printing function since money is created out of thin air. And even worse than that, the US government neither has the intention nor the ability to ever repay the debt with real money. Thus the US debt can only vaporise when the country defaults. Since there is no other way of eradicating this debt, a default by the US is guaranteed to take place in coming years. But before that, the Fed and the US government will flood the market with jumbo jet money since helicopter money won’t suffice. The jumbo jet money will create hyperinflation but it will never repay the debt since all it does is to increase the amount of debt outstanding from trillions of dollars to quadrillions.

The US economy showed natural growth without deficit spending until 1960. At that point, heavier involvement by the US in the Vietnam war created the initial deficits. As Eisenhower handed over to Kennedy in 1961, US debt was only $286 billion. Then 20 years later during the first year of Reagan’s presidency, US debt reached the staggering sum of $1 trillion.

Reagan was hailed as a superb president primarily because of he (like Thatcher in the UK) assumed power at the bottom of the economic and stock market cycles. So they were lucky to get in at the right time. But few people realise that Reagan achieved this by almost tripling debt from $0.9 trillion to $2,6T. So in eight years Reagan incurred $1.7T of debt which is almost twice what all the presidents before him had incurred since 1789. And from then on every single president continued on the neck braking deficit course. Most people believed that Clinton managed the US economy particularly well and created surpluses for the first time in 35 years. But what the Clinton administration succeeded particularly well with was to cook the books rather than to create surpluses. Because in every single year of the Clinton administration, federal debt increased in spite of the fact that budget surpluses were shown. And by the time Clinton left in 2001, he had managed to add another $1.6T debt to make the total $5.7T.

Next record breaker was Bush Jr who increased debt by $4.3T from $5.7T to $10T. But Obama has been the most productive of all presidents so far. Remember that it took the US 219 years to go from zero debt to $10T. Then “Après nous le Deluge” (after us the deluge) Obama took over and before he has finished, US debt will be around $20T. That is the most astonishing increase in national debt in history excluding hyperinflationary economies. And remember that this figure does not include the Fed’s money printing or unfunded liabilities nor personal or corporate debt which all have grown exponentially. With all of that, we can add at least $250 trillion!

US Debt will never be repaid

The first chart below shows how debt has gone from $900 billion in 1981 to $19.6 trillion currently. By the time Obama hands over to Clinton/Trump he will have doubled US debt from $10T to $20T during his reign and he has also presided over a cumulative budget deficit of $7 trillion. 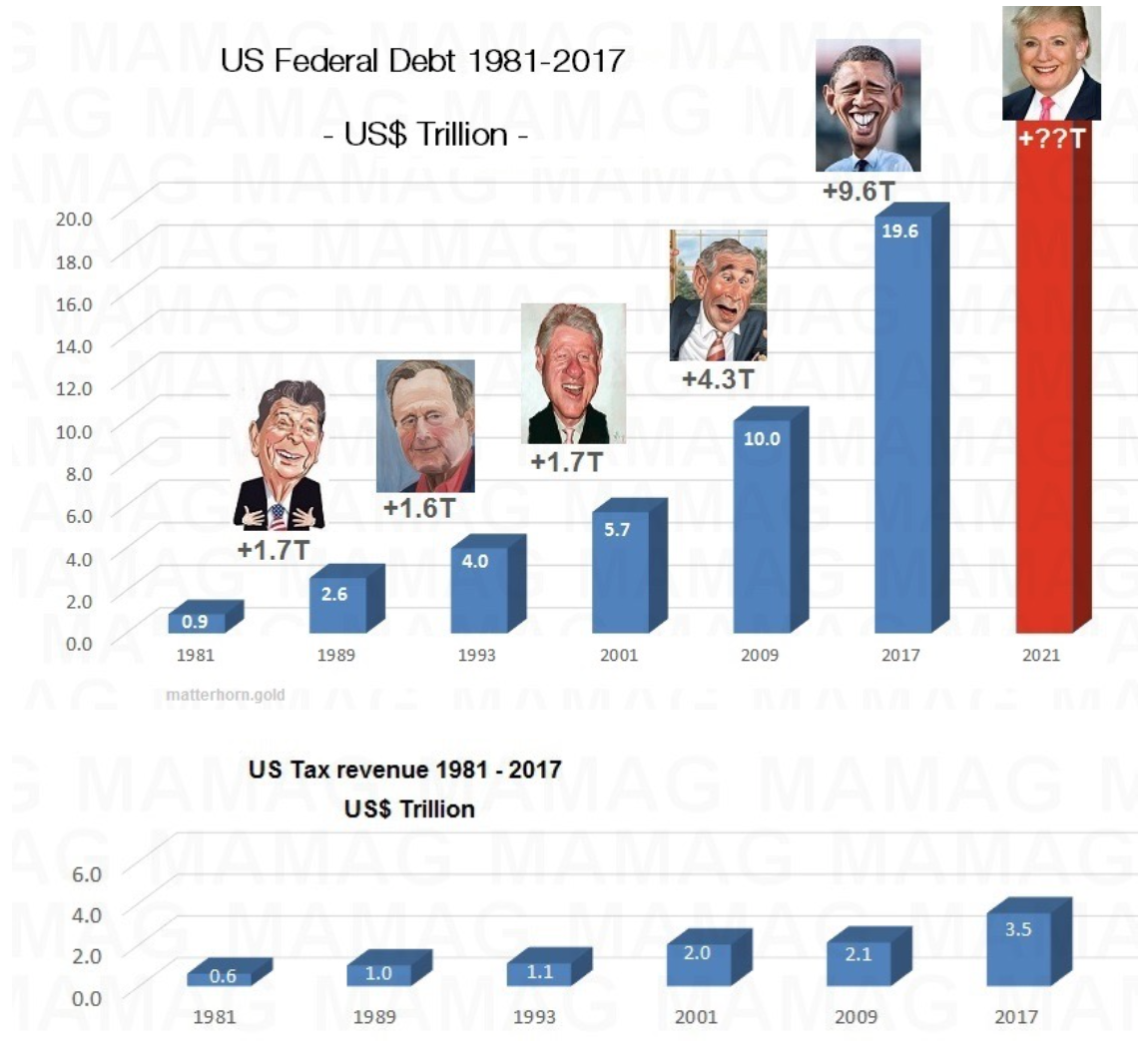 Thus in the last 36 years, US debt will have increased 22 times. It took 220 years to reach $10 trillion debt and Obama has achieved to double this in only 8 years. Having already received the Nobel peace prize, he should perhaps also be awarded the

Noble Prize in Economics as the most productive president in world history.

SINCE 1960 THE US HAS NOT PRODUCED A REAL BUDGET SURPLUS IN ANY SINGLE YEAR. WITH DEBT UP 22X SINCE 1981 AND TAX REVENUE UP ONLY 5.8X, IT IS TOTALLY CLEAR THAT THE US DEBT CAN NEVER BE REPAID WITH THE ONLY REALISTIC SOLUTION BEING DEFAULT AND BANKRUPTCY.