Equality is never worshiped so fervently as in an election year. As I write this in the spring of 2016, both the Democrats and the Republicans have competitive races even as the first pitches of the major league baseball season have been thrown. Every stump speech is televised and every politician’s tweet is analyzed.  TV cameras capture lines of hundreds of people, rich and poor, talented and dull, informed and ignorant, all equal (they are assured), in the eyes of their state’s’ election commission, waiting for hours to cast individual votes that mathematically must be inconsequential.

The Supreme Court just ruled, “states are not obliged to consider the count of voters in order to comply with the ‘one person, one vote’ principle derived from the Constitution,” Politico reported.

Justice Ruth Bader Ginsburg opined, “Nonvoters have an important stake in many policy debates — children, their parents, even their grandparents, for example, have a stake in a strong public-education system — and in receiving constituent services, such as help navigating public-benefits bureaucracies. By ensuring that each representative is subject to requests and suggestions from the same number of constituents, total-population apportionment promotes equitable and effective representation.” 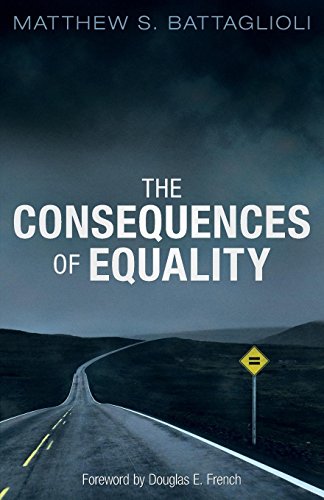 Yes, equality is the law of the land, the rule of law, the American way. A way we’ve steered away from according to Presidential candidate Bernie Sanders, who in a speech after winning the Wisconsin primary, described inequality in America as “grotesque.”

This stifling climate of wrong-headed thinking demands an eloquent defense of what has made civilization. With perfect timing, Matt Battaglioli has sliced, diced and chopped equality, unveiling its destructive force in the pages that follow.

It’s easy to point out the great things we wouldn’t have but for the entrepreneurial genius of the Jobs and the Zuckerbergs. And even the dimmest can catch statists in the contradiction of increasing inequality with government handouts while demonizing the rich as Senator Charles Schumer did when Facebook co-founder Eduardo Saverin chose to expatriate to save $67 million in taxes from Facebook’s public stock offering. With Schumer a champion for equality, logically one would think he’d be happy getting Saverin out of the country to make the rest of us just that much more equal.

Perhaps Schumer was after, not equality, but the tax money, or just plain envy.  As Justice Holmes wrote, “I have no respect for the passion for equality, which seems to me merely idealizing envy.”

“There can be little doubt that many egalitarians are motivated at least partly by envy,” wrote Henry Hazlitt, “while still, others are motivated, not so much by any envy of their own, as by the fear of it in others, and the wish to appease or satisfy it. But the latter effort is bound to be futile. Almost no one is completely satisfied with his status in relation to his fellows.”

We must always remember how the greatest cynic of all, H.L. Mencken, defined wealth: “Any income that is at least $100 more a year than the income of one’s wife’s sister’s husband.”

Mr. Battaglioli has peeled away the many layers of the equality onion to reveal where government’s desperate attempt at equalization will ultimately lead us–much poorer and manifestly less free.  There is virtually nothing that goes unhampered by the state’s meddling in search of it.  The politicization of equality–democracy–creates, as Battaglioli writes, an illusion that we rule ourselves and therefore nobody is ruled. Thus, we are free.

The farce continues with Americans braying that anyone can grow up to govern. The son of a bartender or coal miner, the daughter of a housewife or maid can become president. In America anyone can enjoy the spoils of government force and theft: “anyone may enter the state and hence participate in its coercive actions,” the author explains. Not only is it laughably called public service, America spends billions of dollars attempting to export it all over the world to people who don’t want it.

It all starts with kids taking home trophies for participation, instead of winning. There are no losers. Self-esteem is more important than accomplishment. These results manifest themselves as laws that make employing people a minefield of potential litigation. Ultimately, citizens must serve the state, by acting the right way, saying only what is acceptable, and be willing to turn over what they earn from talent and hard work while being criticized by the political class as being lucky at best, or a criminal, at worst.

The Consequences of Equality is a brave book that thrusts its ideas headlong into the teeth of a politically correct gale force storm.  A storm that threatens our livelihoods, our freedom and civilization itself. Please read it carefully and spread its message far and wide.