Jewish Decline and the Rise of China: In the US

Years ago, when I was tech writer for weird magazines such as Signal and for other more-normal techish pubs, Jews littered the intellectual landscape. They were all over high-end research, such as Bell Labs. The big names were often Jewish, Einstein, von Neumann, Feynman, Gell-Mann, Minsky. The staff list for the Manhattan Project read like a Yeshiva yearbook. The same happened in the arts. Bernstein, Landowska, Rubinstein, Stoppard (“Maidens in search of Godhead…and vice versa.”)

Jews were smart, most people figured, not necessarily liking it.  I wondered why without great interest. Genetic determinists of course cooked up evolutionary explanations involving undiscovered genes acted upon by unquantifiable selective pressures to produce assumed results not correlatable with the pressures. Business as usual.

Later I began to notice without thinking about it that the Jewish names were growing thin on the ground. These were not systematic observations. But Asian names were becoming prominent almost everywhere. The Feinstein seemed to be in recession, if only anecdotally. 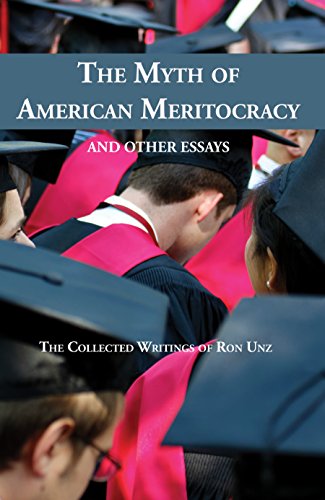 Something odd was happening, I barely noticed.

Then Ron Unz published The Myth of American Meritocracy, documenting a stunning turnaround of which I had been only vaguely aware. The book deals substantially with corruption in admissions to Ivy schools, with some (I think) good ideas for reform. It also charts the sharp decline in Jewish achievement and the meteoric rise of the Asians. (Actually, I think falling is more what meteors do, but cliches are cliches.)

As one example, consider the NMSQT, the National Merit Scholastic Qualifying Test, given nationally to high-schoolers. To be a Semi-Finalist a student has to test in the top one-half of one percent–sort of upper-middle-brow intelligence.

in 2010  there were about 2000 Semi-Finalists in California, the state with the second highest Jewish population after New York. Citing an analysis of last names, Unz notes that there was only one Cohen, Levy, and Kaplan, but 49 Wangs and 36 Kims.

This pattern, Unz notes with lots of documentation, repeats across the country. For example, in the ultra-high-end high schools such as Thomas Jefferson in Virginia and Stuyvesant in New York. These places are scary smart, CalTech in short pants. Unz:

“Jews and Asians today are about equal in number within New York City but whereas a generation ago elite local public schools such as Stuyvesant were very heavily Jewish, today Jews are outnumbered at least several times over by Asians.”

Which is to say that even if all the whites were Jews and no HAGVACAS (House and Garden Variety (non-Jewish) Caucasians), the Asians would be outperforming the Jews by three to one.

Which is crazy strange.

Now the reader may say, “But Fred, this  objection and that objection, and what about…?” Fair enough, but in condensing a  book into three paragraphs one leaves things out. The sources are there and the analysis careful. And no, the book is not an attack on Jews, Unz himself being Jewish and a Harvard grad.

Methinks, subject to correction, that his findings shed considerable darkness on what we think we know about intelligence. Jews still perform better than Hagvacas, but less good than before, and the Asians are way ahead of the Jews. It seems unlikely that the Asians have suddenly risen in biological intelligence, or that Jews have gone down. Putting it otherwise, when one group falls almost overnight on a wide variety of tests thought to measure intelligence, and another rises, it follows that either intelligence can change very fast or the tests are not measuring intelligence. So what is happening? What do the aptitude tests measure?

The easy explanation is that the Chinese kids are of about normal intelligence but just work harder. Yet when a kid gets into Stuyvesant or MIT, he can’t get by on hard work and modest attitude any more than I could play for the Chicago Bulls by practicing hard. You have to be smart to do, say, computational fluid dynamics. Actually really, really smart with tensors and things.

Which is why I have trouble buying the explanation offered by a Jewish friend: “We’ve lost our hunger.” I think he means that in his day there were Jewish quotas in universities and no room in the country club so when those barriers lifted the Jewish kids  were going to show the goyim what was what and went at everything fang and claw and, well, showed the goyim. Then they got comfortable, moved to the suburbs, and maybe even watched football.

I have known people with very high pre-dumbing-down SATs, and Merit Semi-Finalists, and people with IQs in excess of 150. They didn’t just know stuff. They were bright. Was intrinsic intelligence raised in the Asian young by the hard study?

Whatever is happening, it is grave. Consider CalTech, which probably has the highest standards for admission in the country. Further, it does not practice affirmative action. The demographics of the studentry: Black, 2%; Hispanic, 12%; White (including Jewish), 28%; Asian, 44%. This is worse than it seems at a glance because Asians are only 15% of the population of California,and six percent of the national.

Whatever is happening, it is not a statistical  fluke. A couple of quotes from the book among many similar ones:

“For example, among Math Olympiad winners white Gentiles scarcely outnumbered Jews during the 1970s…but since 2000 have become over fifteen times as numerous.”

“Over forty percent of Putnam winners prior to 1950 were Jewish…but since 2000 the percentage has dropped to under ten percent,  without a single likely Jewish name in the last seven years.” The Putnam is a very high-end math test.

Another of my friends has an Asian wife and thus entree  into the Asian community. He quotes their (wisely private) outlook: “Whites are lazy and stupid.”

The curious thing is that the Asians are not just way ahead of Jews, but wayer ahead of Hagvacas. The gap is huge and seems to me too large to be explained by the few points of extra IQ sometimes attributed to East Asians.

The Asian rise may have consequences. It is not thought proper to notice that the white population of America, numbering very roughly two hundred million, provides nearly all of the scientific advance, engineering, and entrepreneurship. China has, again very roughly, a billion Han Chinese–you know, the kind that dominates Hagvacas and Jews in the US.

I watch Chinese technology as best I can. In fifteen years, China has gone from having no supercomputers to having slightly more than the US has, including the world’s two fastest, the most rapid of which (TaiHuiLight) is a Chinese design using Chinese semiconductors. (Obama, ever brilliant, stopped Intel from selling them chips, so they apparently decided the needed to supply their own.) The quantum-crypto line from Beijing to Shanghai said to have been spurred by a desire to keep NSA off China’s back, is noticeably more advanced than carrier pigeons. The type 093B nukey attack sub just launched seems a major improvement over its predecessor. The 300 mph plus Shanghai Maglev trains use foreign technology, but now they know how to do it. China is by far the world leader in high-speed rail, of which America has none.

Beijing is trying hard to advance technologically and with success With Jews going dark, and Hagvacas worried about safe spaces and microaggressions, who is going to protect America against competition by potentially five times as many engineers as we have, especially if they perform as well as our Asians do?

So, You’ve Been Made Superfluous…Running on Ketones